Being an ally in the Trump era 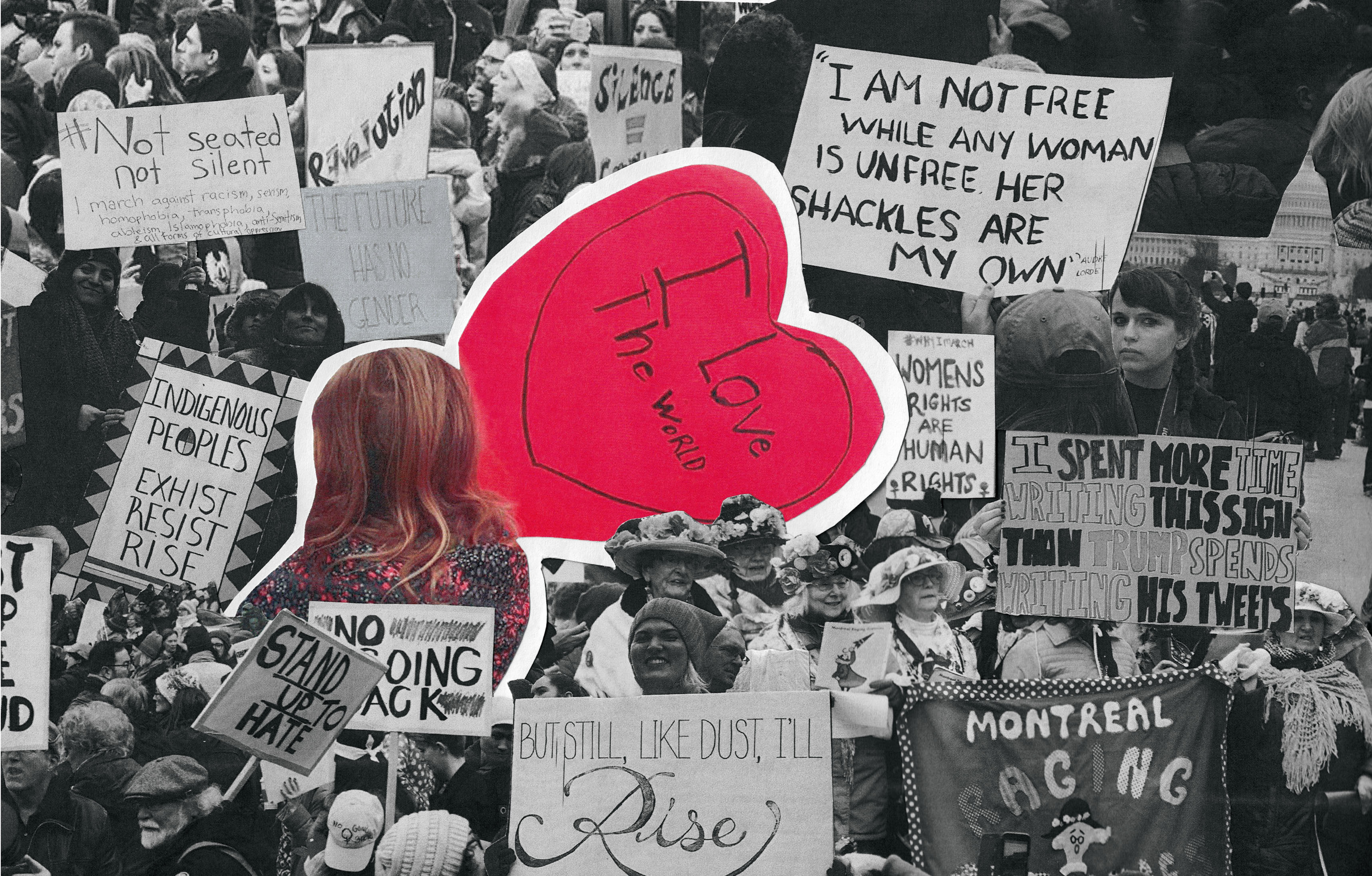 The U.S. Presidential Inauguration, the entire election process, and the discourses surrounding it, have proven that the vision of allyship understood and practiced by the supposed “friends” of the movement needs to change. Many marginalized people have pointed out that while they had hoped for the best before the election, they were not surprised by the outcome. I, an able-bodied, cisgender, upper middle class, mixed-race woman, along with many allies, was shocked at the election results. Upon further reflection, I realized that what I deemed surprising has actually been a historic reality for the United States.

After the Civil War, there was the Jim Crow era in which Black people were systematically and brutally murdered and abused by both the government and white citizens. The sixties and seventies brought an increased demand for freedom and equal treatment; this apparent progress was followed by the rise of New Conservatism and the “return to traditional values” under Reagan, which saw the government roll back its funding of social services, increasing social and economic vulnerability among impoverished and marginalized groups.

The U.S. has an established pattern of progress and regression and yet I, among many other Americans, was foolish enough to believe that having a Black president signalled the end of this back-and-forth. Racism, sexism, homophobia, transphobia, ableism, and classism are alive and well in the United States and the consequence of Donald Trump’s election is this: we can no longer ignore this. When I say we, I speak about those who call ourselves allies. Those of us who could never imagine that anything we do might be perceived as racist, homophobic, sexist, transphobic, ableist, or otherwise discriminatory. We are supposedly the good guys – and we failed.

Post-election, both the left and the right asked for unity. Donald Trump and his supporters demanded unity because they had won, they had vanquished us, and we needed to fall in line. The left asked all of us who disagree with the administration to join them to fight: “Love Trumps Hate.” We promise. We can all unite. We can all agree that positivity and love are better than the hatred expressed by the Donald Trump campaign and his supporters. And yet, there is no discussion of concrete, real action to fight against the inevitable furthering of inequalities and discrimination that will come out of the Trump administration. This discourse did not ask for us to reflect inwards to think about how allies perpetuate the systems of oppression against which we claim to fight. Some on the left asked that we wait to see what Trump would do as President before passing judgment or taking action. “Give him a chance,” they asked, ignoring the fact that undocumented immigrants are threatened with almost certain deportation, and that disabled folks who rely on the Affordable Care Act cannot afford to wait.

Allies want to relieve affected communities from the control of oppressive power dynamics, but our intentions are obscured by our lack of understanding on how we enact these power dynamics ourselves: how our own internalized sexism, racism, homophobia, transphobia, ableism, and classism influence our activism. Our abstract understanding of privilege can be seen concretely in the way allies perform solidarity, be it the occupation of a space meant for marginalized groups or through offhand comments that are meant jokingly. We keep telling ourselves that our intentions are good, but we use this as an excuse not to recognise that we often engage in the systems of oppression that we seek to destroy.

The Women’s March on Washington, and many of its sister marches, is a prime example of how allyship has deviated from its purpose. On the one hand, it was fulfilling, cathartic even, to be surrounded by angry women demanding equality. But even the name reveals that this march was truly created for one group. Although in its dictionary definition, the term “woman” exclusively denotes gender, it has been appropriated by the first and second wave feminist movements to primarily refer to white cisgender women. For example, suffragettes are applauded, and Susan B. Anthony’s tombstone covered in “I voted” stickers, although her justification for women’s right to vote centred on the superiority of white women over Black men: the right to vote was granted to Black, Asian, Indigenous, and Latinx women only later. Even today, the debate of women choosing whether to “lean in” or “opt out” of full time jobs often excludes lower-class women, often Black, Indigenous, and women of colour, who cannot afford such choices, as well as expressing heteronormative ideas about family structure.

The signs that many people made for the marches emphasized anatomy – “pussy grabs back” – which is exclusionary to trans and nonbinary folks by reducing the complexities of gender to a body part. The fact that the march’s manifesto was re-written to exclude language that supports sex workers is another example of how “woman” is used to mean something very specific, an implicit recognition of what the ‘respectable’ ‘norm’ is. While society has created and perpetuated the concept of the right ‘woman,’ these standards are upheld by powerful voices, even from within the feminist movement – allies at places like the Women’s March should be among the first dismantling these norms.

What is perhaps most significant about Donald Trump’s election is not that it proves that even the most unqualified person can become president as long as they are a rich, heterosexual white male. Now is the time for us, again referring to allies, to look inwards and ask ourselves how we missed the signs. How we are able to spout our progressive ideals while simultaneously ignoring their erosion. Why we only seem to march when it is in our interest to do so? After the Women’s March on Washington, writer and activist Ijeoma Oluo posted on Facebook: “I cannot put into words how heartbreaking it is to see grown adults that I know and love decide only now to take to the streets. I’m glad you’re doing something. But…weren’t we worth it before? Why weren’t we reason enough? Where have you been? And where will you be once this doesn’t impact you directly anymore?”

A photo went viral of a Black woman holding a sign that said “Don’t Forget: White Women Voted For Trump” with three white women wearing “pussy hats” in the background. White women took this opportunity to say “not me,” as though this excuses the disproportionate damage that this administration will have on marginalized folks. What the photo and the above quote point to are not that the blame for Donald Trump’s election rest on white women’s shoulders but that he is symptomatic of larger problems that exist even within the left. Just because we believe that people deserve basic rights does not mean that we don’t perpetuate systems of oppression.

Now, we must act. Now is the time to unravel our privilege and recognize that this is a never-ending process. Now is the time to listen, to ask questions, to read and consume media made by those who are marginalized. Palestinian Muslim-American activist Linda Sarsour said in her speech during the Women’s March on Washington that “if you want to know if you are going the right way, follow women of color.” Under the Trump administration, allyship must change from simply a way of affirming that you are not racist, sexist, classist, ableist, homophobic, or transphobic into a support system of all these different movements where everyone shows up. When the next Black Lives Matter protest happens, we show up. When the construction at Standing Rock continues, we show up. And if we are unable to be there, we draw attention to it. We call our representatives, the president even, to express our concern, disbelief, and disgust. We ask the press why they aren’t providing proportionate coverage.. If we are unable to attend, we make sure the police know we are watching. If we do attend, and the police become violent, we will be in their way, using our privileged bodies to make them hesitate. We cannot wallow in disbelief at what has happened, but we can acknowledge our accomplishments while also consciously improving on the ways we understand and perform solidarity.