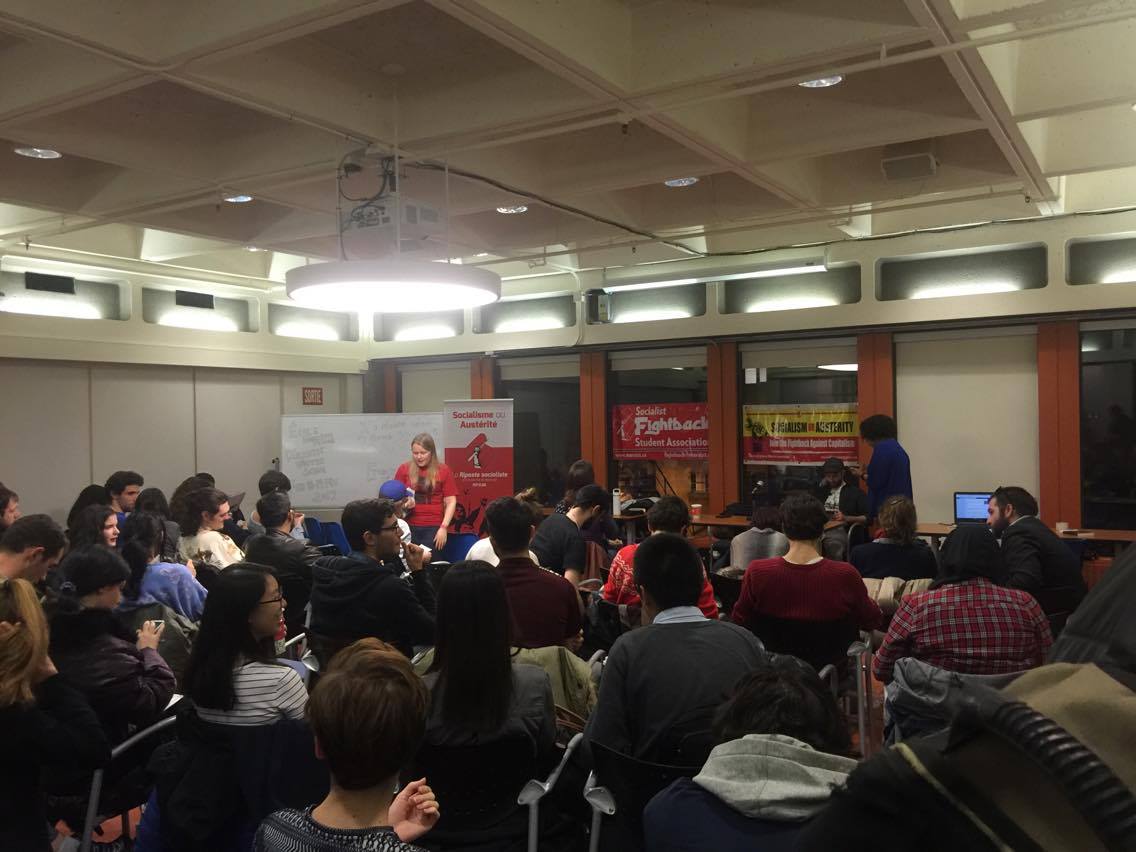 On Thursday, November 17, around 120 students gathered at the Shatner Building in the Madeleine Parent room for an event called “How can we defeat Trump?” The event was organized by the group Socialist Fightback at Concordia and McGill, which aimed to bring people together with the shared goal of “organiz[ing] ourselves to fight back against [Donald Trump].”

Trump’s 2016 presidential campaign has received international coverage, with many denouncing his proposed policies, which include building a wall along the U.S.-Mexico border, a temporary ban on Muslims immigrating to the United States, and derogatory comments against women, people of colour, people with disabilities, Mexicans, Muslims, and others. His election as U.S. president was shocking to many, and has resulted in a number of domestic and global protests against growing nationalism, xenophobia, and protectionism.

The event, which marked the highest turnout for Socialist Fightback at McGill and Concordia, consisted of a talk given by Joel Bergman, an organizer and member of Socialist Fightback for over ten years, that was accompanied by a concurrent French translation. An open floor discussion amongst the attendees followed.

“How did Donald Trump win the election? How did this racist, sexist, misogynist, lying billionaire become the President of the most powerful country in the history of the world? And how were all of the analysts so wrong?” Bergman asked the crowd. “Everyone said ‘this is impossible, it will never happen, he’s a joke’ […] It wasn’t just one or two stupid analysts; this was across the board. This was not an ordinary election, and we are not living in ordinary times.”

“Obviously, everyone was surprised, even I was somewhat surprised by the Trump victory” Bergman said in an interview with The Daily. “If you look at what happened in Britain, with this vote to leave the E.U. [European Union], [it’s] a very similar phenomenon, and if you look at what’s happening all over Europe, […] we are seeing a rise in political polarization to the right and to the left.”

“This was not an ordinary election, and we are not living in ordinary times.”

Bergman has previously spoke to The Daily about the “crisis of capitalism,” but following the results of this election, he seemed even more convinced that now is the time for a fundamental change in the system.

“This is the least popular president in the history of the country, and he hasn’t even been inaugurated yet,” he said.

“I think that the only way to fight this sort of division that [Trump] uses, his language that he uses [which] is very similar to scapegoating, […] is with solidarity,” Kian Kenyon-Dean, a member of Socialist Fightback, told The Daily. “You can’t fight capitalism with capitalism, you can’t fight fire with fire; you fight fire with water. You fight division with solidarity, [and] you fight capitalism with socialism.”

Kenyon-Dean went on to explain that in many ways, Trump’s election seems to have been a wake-up call for people.

“This is the least popular president in the history of the country, and he hasn’t even been inaugurated yet.”

“The fact is that Trump getting elected has radicalized people to the left and to the right, and we can’t just sit around and mope,” he explained. “It may be a cliche, [but] it’s a good one: it’s a famous quote, ‘don’t mourn, organize,’ and that’s what we need to do now. We need to present an actual alternative.”

Speaking to The Daily, Julien Arseneau, a member of Fightback and one of the event’s organizers, said: “We can’t ignore the background of economic collapse in the U.S.. In 2008 the big banks were saved when hundreds of billions of dollars were pumped into the banking system […] but interestingly when the poor Americans lose their houses, lose their jobs, nobody is there to help them and they [the government] say ‘we don’t have money,’ but then [they] have $700 billion for the banks.”

“You fight division with solidarity, [and] you fight capitalism with socialism.”

“I think Americans were desperately seeking an alternative to the status quo, and unfortunately in this election, the only seemingly different thing from the status quo was Donald Trump,” Arseneau added.

This was a common theme amongst the attendees, as the consensus seemed to be that it was Americans’ frustration with the system that led to their new president-elect. Many attendees also felt the opposition to Trump needed to stop labeling his supporters as racist or misogynist, and rather call them what they are: people who feel frustrated and disenfranchised.

However, discussion showed that there was no unanimous agreement on how to approach resisting president-elect Trump.
One attendee, who did not identify himself, spoke on the issue of systemic change: “We are a system, and a system cannot change if there is resistance.”

“Resistance is what we are doing, in our efforts to dismantle Trump and his claim to the presidency and not accepting it, is resistance on our part. Therefore, instead of fighting to bring him down, why don’t we try to come up with solutions? Why don’t we force legislation to be passed?” he asked the crowd.

“I think Americans were desperately seeking an alternative to the status quo, and unfortunately in this election, the only seemingly different thing from the status quo was Donald Trump.”

“Just protesting, talking, and complaining doesn’t offer a solution, and in fact it might appear to make him seem the better person. It makes him become the victim of something that is considered negative in society,” he continued.

“I am not saying it is wrong to protest, I am just saying we need to have a smart approach,” he added.

Though his idea was not shared by all in the room, as the general opinion called for the complete removal of the capitalist system, the point that he made seemed to hit home.

“Therefore, instead of fighting to bring him down, why don’t we try to come up with solutions? Why don’t we force legislation to be passed?”

“We need more than just protests, we need to actually put forward something positive that we do want,” Bergman told The Daily. “Eventually, with no direction, people get tired and go home, so there needs to be a real movement.”