Take a bite out of pain 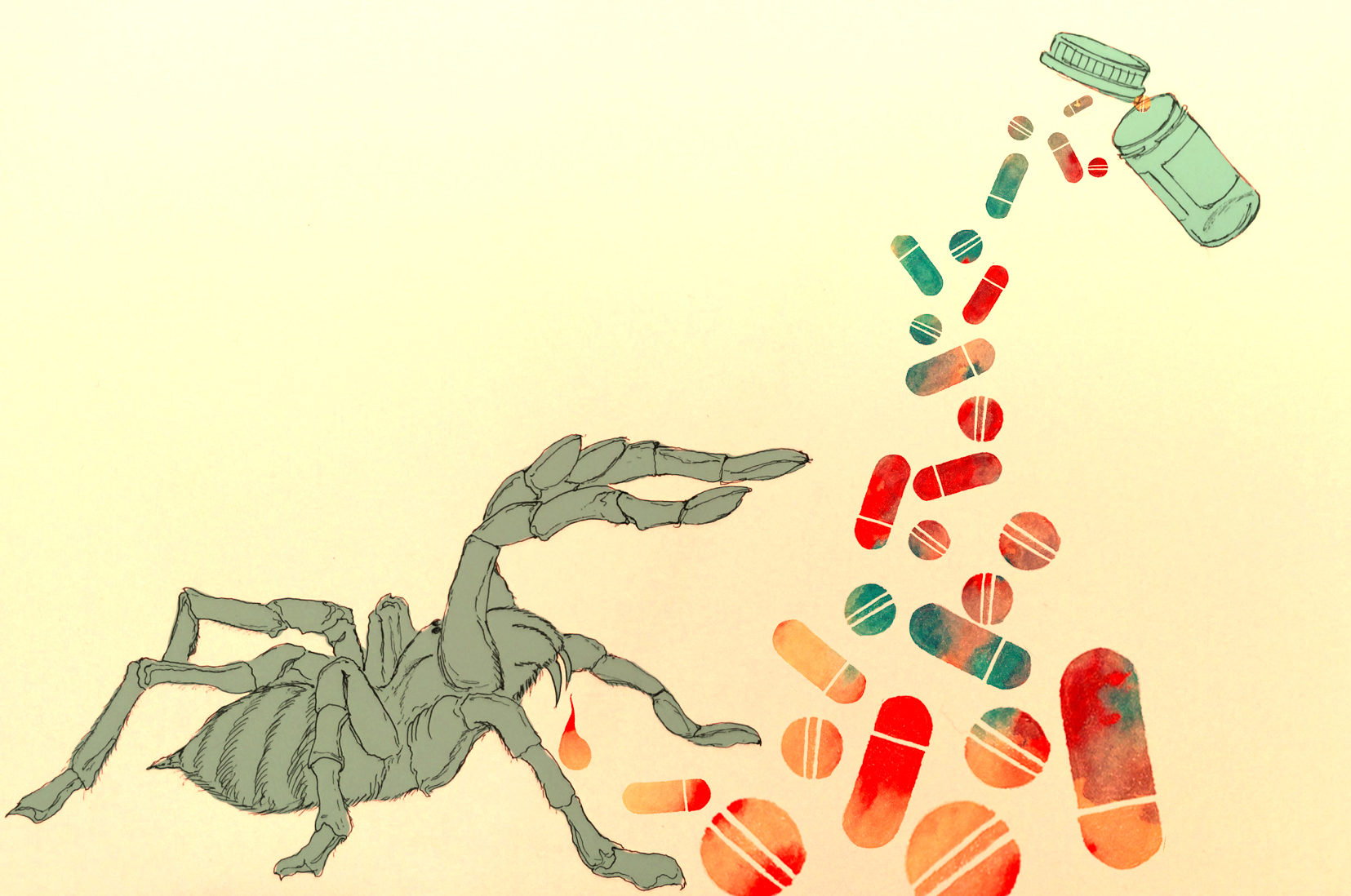 If you were looking for a new painkiller, where would you begin your search? Tarantula venom? Probably not. However, contrary to intuition, some compounds found in the venom can have extremely useful effects.

Earlier this year, researchers at the University of Queensland in Australia discovered that a peptide toxin found in the venom of the Peruvian green velvet tarantula may have important potential as a painkiller. Venom is a complex mixture of enzymes and proteins – peptide toxins are proteins that have a toxic effect on the animal’s victim. Types of peptide toxins can vary greatly from species to species. The specific peptide these researchers examined is called ProTx-II. Researchers were already aware of the fact that this peptide inhibits the voltage-gated sodium channel NaV1.7, an important pain receptor. NaV1.7 sodium channels are located in the cell membrane of nociceptors, a type of nerve cell that transmits pain signals. However, by studying the structure of ProTx-II using nuclear magnetic resonance (NMR) spectroscopy, the Queensland researchers made groundbreaking discoveries about the mechanism by which the inhibition occurs. NMR spectroscopy allowed them to create 3D representations of the peptide, and thus closely examine its structure to see how it might interact with the cell membrane of neurons.

Sonia Troeria Henriques, the lead researcher of the team, explains that, “The neuronal cell membranes attract the peptide [toxin] to the neurons, increase its concentration close to the pain receptors, and lock the peptide in the right orientation to maximize its interaction with the target.” The discovery of the cell membranes‘ role in blocking pain receptors has important implications for the future development of painkilling drugs.

This is far from being the first time venom has been researched as a potential painkiller. Researchers in France found that the venom of the black mamba, one of the most dangerous snakes in Southern and Eastern Africa, contains proteins called mambalgins, which are as effective as morphine in stopping pain. Another venom that is being studied for its painkilling potential is that of the cone snail. Scientists have found that the extremely powerful venom of the cone snail contains certain proteins that “can be up to 10,000 times more potent than morphine,” as described by the National Geographic. In 2004, the U.S Federal Drug Administration actually approved a drug called Prialt which contains a synthetic form of a peptide found in cone snail venom.

Painkillers derived from venom open up a whole new world of drugs.

How did these animals develop these powerful venoms? According to scientists, venoms started out as genes for other functions. Normal proteins undergo mutations. A common mutation is one that causes DNA to get duplicated; this means that the extra gene can mutate again without affecting the original gene. These mutated genes might help animals capture prey, and if they do, these animals are more likely to survive longer and pass on their DNA, while animals lacking the mutated gene would die off. The new venom gene may further evolve or it may even duplicate. Scientists have actually found that the rate at which cone snails duplicate venom genes is the fastest in the animal kingdom.

Painkillers derived from venom open up a whole new world of drugs. The peptide toxins found in venom work differently from opioids (such as morphine) that are commonly used as painkillers, so they can block pain without causing many of the harmful side effects of opioids, such as addiction. However, these venom-derived painkillers are still under development, as they pose certain challenges. For instance, the pain-blocking peptides in the venom of cone snails and black mambas cannot cross the blood-brain barrier to bind to the pain receptors in the brain, so they need to be administered via spinal injections. This is highly inconvenient, because of complications such as infection, hematoma, and direct nerve trauma, as well as their high cost.

You could look at nature as being like a catalogue of products, and all of those have benefited from a 3.8 billion year search and development period.

Nonetheless, the compounds found in venom provide enormous potential in the development of new painkilling drugs. Using nature as a source of inspiration and innovation has long been an important driver of scientific advancement. For instance, in 1941, Swiss engineer George de Mestral observed burrs sticking to his dog’s fur, which led him to invent velcro. Another fascinating example is Zimbabwe’s largest office and shopping complex, the Eastgate Centre, which was inspired by the structure of termite dens. Architect Mick Pearce designed the Centre, taking inspiration from the ventilation system of termite dens, to create a building that uses “less than 10% of the energy of a conventional building its size.”

These are all examples of biomimicry, which is defined as “imitation of life or nature.” The term ‘biomimicry’ was popularized by biologist Janine Benyus in her 1997 book Biomimicry: Innovation Inspired by Nature. Biomimicry plays a crucial role in the field of medicine – not only in the development of painkillers, but in other areas as well. For example, researchers inspired by the head of Pomphorhynchus laevis, a parasitic intestinal worm, designed surgical microneedles with tips that swell when they come into contact with water. These microneedles provide “three times stronger adhesion than conventional surgical staples.”

The potential of biomimicry is huge. Michael Pawlyn, an architect and strong advocate of biomimicry, explains that, “You could look at nature as being like a catalogue of products, and all of those have benefited from a 3.8 billion year research and development period. And given that level of investment, it makes sense to use it.” According to the Biomimicry Institute, biomimicry may be the key to solving the world’s sustainability issues because it means drawing on nature’s “time-tested patterns and strategies” which have proven to be sustainable. For example, the award-winning Living Filtration System uses an earthworm-inspired technology to create a sustainable alternative to conventional agricultural drainage systems, thereby reducing the need for fertilizer and leading to healthier soil.

Nature is an excellent source of innovation, whether it’s for developing new painkillers, designing energy-efficient buildings, or creating better surgical tools. In an environment currently being devastated by global warming, it’s important to find viable solutions for the issues that we face through more natural means. As technology continues to move forward, we can use biomimicry in more sophisticated ways to solve the problems of the 21st century. The concept of a tarantula venom-inspired painkiller is still under development, but in the meanwhile, you can look around and let nature do what it does best – which is inspire us to create and innovate.