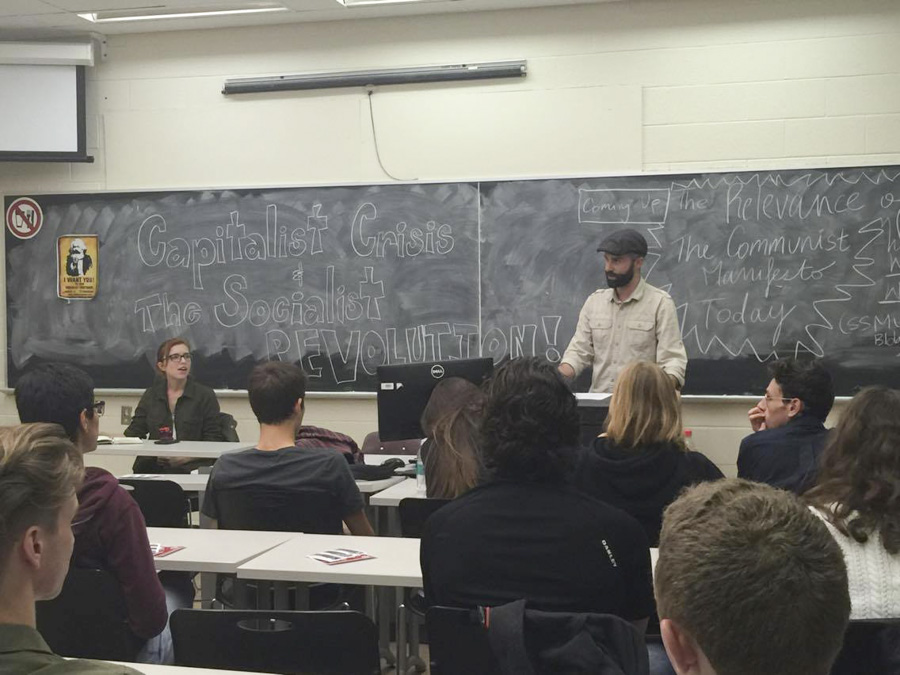 On Wednesday, September 14, about seventy people gathered in a Concordia University classroom, filled past capacity, to discuss the “Capitalist Crisis” and the need for a socialist revolution.

The event was organized by Socialist Fightback at Concordia and McGill, a student association that aims “to promote a Marxist analysis and program for today’s workers and youth.” The group is a chapter of the larger Canadian Socialist Fightback collective, which describes itself as “the Marxist voice of the working class and revolutionary youth in today’s labour movement.”

The event began with a talk by Joel Bergman, one of the event organizers and a member of Fightback for over ten years. He discussed the decline of capitalism over the past several decades, and focused on the reasons why Fightback believes socialism is essential for building an equitable and sustainable society.

“‘It’s going to take at least twenty years to solve the problems of the Euro, twenty years of cuts and falling living standards,’” Bergman said, quoting a Financial Times article to the room.

“This isn’t some Marxist paper saying this, this is the bourgeois saying it themselves, saying this is what will have to happen in order to rectify the situation,” he continued.

Valentina Garcia, an organizer of the discussion and a studio art student at Concordia, told The Daily in an interview that “after [WWII] the market was expanding. But now we see that the capitalist crisis is happening – and it’s not really a crisis, it’s more like this is the normal state of capitalism […] It is normal for capitalism to be this bad, and it’s only going to get worse.”

“Now we see that the capitalist crisis is happening.”

“Young people don’t remember the ‘Golden Ages,’” Bergman elaborated in an interview with The Daily. “My parents talk about it […] In the sixties, seventies, there was free health care, they created the EI [Employment Insurance] system, so you know, even if you lost your job you’d be taken care of. There were all of these great things, education was cheaper, and [you could find a job] just like that. My dad, he didn’t go to university, he just did some stuff in college and then bam – he started working in the CBC.”

It should be noted, however, that during this period marginalized communities faced widespread systemic discrimination which often prevented them from benefitting from the societal prosperity of the post-war era.

During the discussion, Bergman addressed the significance of Bernie Sanders’ candidacy in the United States presidential primaries, citing it as evidence that more people are starting to accept the idea of socialism.

Many people present at the event blamed capitalism for far more than just recent economic troubles. “When you have capitalism you [have] racism and sexism to oppress people, to pay them less.”

While many of the attendees believed that capitalism fueled oppression, they also believed that socialism could bring people together.

Speaking to The Daily, Julien Arseneau, a member of Fightback and a Université du Quebec à Montréal (UQAM) graduate who attended the event, said: “homophobia, sexism, misogyny, transphobia, and all the like have absolutely no place in our movement. They are really divisive. They’re unacceptable for revolutionaries, unacceptable attitudes, and we have to fight against those all the time.”

“Homophobia, sexism, misogyny, transphobia, […] have absolutely no place in our movement.”

“What unites us in the struggle against capitalism is our class position in society,” he continued. “The socialist revolution needs to be inclusive, to include all the oppressed people and unite them to transform society towards socialism.”

Bergman hopes to unite people toward the socialist cause through education. “We aim to study everything that’s happened day in and day out – the past movements, the current movements, and revolutionary theory – in order to educate youth and new revolutionaries today,” he said to the crowd. “And with this I really think there will be amazing possibilities.”