On February 22, almost 900 students gathered in the Shatner building to participate in the Students’ Society of McGill University (SSMU) Winter 2016 General Assembly (GA).

A motion in support of the Boycott, Divestment and Sanctions (BDS) movement passed with 58 per cent of the vote. A motion for an increase in Indigenous content at McGill and a motion regarding the procurement of products containing conflict minerals by SSMU also passed.

A motion regarding support for the kahtihon’tia:kwenio (women title holders of the land) who delivered a notice of seizure and a list of demands to McGill University in September was added to the agenda at the GA. The motion was postponed until the Fall 2016 GA.

The doors for the 3:00 p.m. event opened at 2:12 p.m., with the SSMU ballroom filling to capacity by 2:40 p.m.. Other rooms in the Shatner building were then filled, including Gerts, Lev Bukhman, the cafeteria, room 108, and the Club Lounge. The entire GA lasted five hours and twenty minutes.

To come into force, all motions passed at the GA must be ratified online in a referendum of SSMU members. This will take place within the week, according to SSMU President Kareem Ibrahim.

The BDS motion, brought forth by the McGill BDS Action Network, sought that SSMU support BDS campaigns through the office of the VP External, and that the President lobby the McGill Board of Governors for “divestment from companies profiting from violations of Palestinian human rights” by bringing the issue up at every meeting. Last year, two similar motions were brought up at the Fall 2014 and Winter 2015 GAs, where they were, respectively, postponed indefinitely and voted down.

The global BDS movement was launched in 2005, after a call from 171 Palestinian civil society organizations to impose boycotts and implement divestment initiatives against the State of Israel “until [it] meets its obligation to recognize the Palestinian people’s inalienable right to self-determination and fully complies with the precepts of international law.”

McGill holds investments in at least three companies that, according to the motion, profit from Israel’s activities in the occupied territories: L-3 Communications, Mizrahi-Tefahot Bank, and RE/MAX.

Dozens of students lined up in the SSMU ballroom to speak on the BDS motion, which sparked a debate that lasted over two hours.

“The lands in the West Bank are being appropriated, resources are being appropriated for Israeli settlers,” said an anonymous U2 Science student. “By investing in the companies McGill is invested in, we are complicit, and as a Palestinian student, I refuse this. […] If you are pro-Palestinian, vote yes. […] If you don’t want Israel to be involved in fucked-up human rights violations, vote yes.”

Students who spoke against the motion mentioned that this motion was too closely tied to some students’ identities and as such risked alienating certain groups of students.

“Real allies would not ignore the call being made by the overwhelming majority of Jews, who, of any religious group, are the number one victims of hate crimes in the U.S. and Canada, and are saying that they have seen [a rise] in anti-Semitism wherever BDS has been adopted,” said Arts student Noam Blauer.

Arts student Sami Fuller responded, “I would like to ask, where exactly in the language of this motion do you see any targeting of students? We are boycotting policy, not students.”

Some students argued that the BDS movement would undermine the Palestinian cause by alienating potential allies. U2 Arts student and the president of Israel on Campus Jordan Devon said, “Cultural boycotts only serve to place the Israeli left in a precarious situation while reinforcing the right’s hold on the government. Netanyahu keeps winning elections because he’s telling Israelis the world is against them.”

A Management student said, “If BDS was truly a movement about helping Palestinians, it’d advocate even investing in Israel thus providing necessary capital for the building of industry and infrastructure, were Jews and Arabs alike can work together toward the common language of peace and prosperity.”

“Real allies would not ignore the call being made by the overwhelming majority of Jews, who, of any religious group, are the number one victims of hate crimes in the U.S. and Canada, and are saying that they have seen [a rise] in anti-Semitism wherever BDS has been adopted.”

However, others emphasized that BDS has been called for by Palestinian organizations.

“First of all, as a Palestinian, can you not speak on my behalf?” said Laura Khoury, a McGill BDS organizer responding to the management student. “We have called for this. It is your moral obligation as people of social conscience to answer this call. It is not your obligation to tell what Israel has done to us. Every single Jewish student in this room can fly to Israel tomorrow, while I have never been able to step foot on that land.”

The vote was taken by secret ballot, following a motion to that effect. The main motion carried, with 512 votes for, 357 opposed, and 14 abstentions.

“It’s an amazing feeling, finally, to see justice win. When you’re on the right side of history, it’s empowering. When something like this happens, it validates what you’re feeling,” one student attendee, who wished to remain anonymous, told The Daily.

“I’ve talked to so many people who have said that issues like this only divide the campus, and [that] the GA isn’t very representative of everyone’s voices. So now we finally get the chance, through the online ratification, to see how well it correlates with the rest of the university,” they continued. 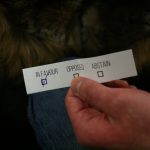 A vote in favour of the BDS motion.

Concerns raised over motion to support the kahtihon’tia:kwenio

On September 12, McGill was delivered a notice of seizure by the kahtihon’tia:kwenio, women titleholders of Kahnawake, which claimed that the University violates the Great Law of Peace “by staying on our land without our permission.”

The notice also asked that McGill repay a loan taken from the Six Nations’ Trust Fund in the mid-1800s, which would amount to approximately $1.7 billion with compound interest, and that it cease “developing technologies for surveillance, death, and destruction” on the occupied land. According to McGill Director of Internal Communications Doug Sweet, this debt has been paid back to the federal government.

The motion, which was submitted after the motion submission deadline and was not available online before the GA, called on SSMU to support the kahtihon’tia:kwenio and lobby McGill to meet with them to discuss their grievances.

“I feel that this lack of consultation is just a perpetuation of colonial problems that have been happening at this university.”

Ashley Bach, Coordinator of the Indigenous Student Alliance of McGill, raised concerns with the motion.

“There was no consultation with the Indigenous student life at McGill University in the making of this motion,” Bach said. “I feel that this lack of consultation is just a perpetuation of colonial problems that have been happening at this university.”

Bach added that one of the women titleholders consulted for the motion is a controversial figure in Kahnawake, whose ideas and writings have resulted in some backlash against her community. “The Indigenous Student Alliance cannot back what this woman is saying, because of a lack of support in her own community.”

O’Neil apologized for the lack of consultation. “[From] my perspective as a settler student at McGill, when we were approached by the kahtion’tia:kwenio, who asked us to bring forth the motion, it was with the understanding that it was not our role to engage in a consultative process within the community, that would not be our place.”

Students voted to postpone the motion until the next GA, with three votes against.

The GA also passed a motion to change SSMU’s auditor from Richter LLP to Fuller Landau LLP, which, according to VP Finance and Operations Zacheriah Houston, will save the Society approximately 15 per cent on audit fees annually.

“Contrary to what many of you may think, this is one of the most important motions on the agenda today,” Houston said at the GA about the motion.

Another motion, regarding the procurement of products containing conflict minerals by SSMU, called for SSMU’s Financial Ethics Research Committee (FERC) to “update its purchasing guidelines to include consideration of the extent to which electronics suppliers are making efforts to source conflict-free minerals from Congo for their products,” among other requests.

The motion passed without debate.

A motion for an increase in Indigenous content at McGill also carried with no debate.

“The motion accepts the idea that we should be a part of the truth and reconciliation process, and asks SSMU to be a champion of this,” said Jacob Schweda, third-year Law student and co-president of NDP McGill. “It’s a relatively modest step forward, but it’s one that we think is important for the community.”

The GA concluded with a brief discussion on the Senate caucus smoking working group’s Smoking Policy Proposal, as well as reports from the SSMU executives.

—With files from Cem Ertekin