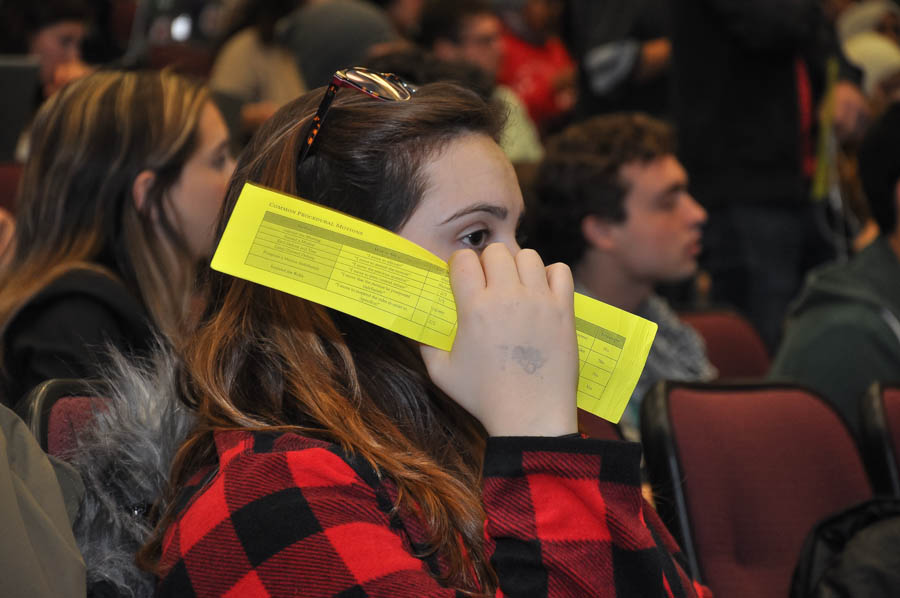 On March 15, students gathered in Leacock 132 for the Students’ Society of McGill University (SSMU) Winter 2015 General Assembly (GA). Motions on the table concerned unpaid internships, an accessible education policy, and divestment from companies profiting from the illegal occupation of the Palestinian territories. The event was scheduled to begin at 11:30 a.m., but due to the high number of attendees, proceedings did not begin until noon.

The first motion discussed concerned the nomination of RSM Richter as the auditor for SSMU. VP Finance and Operations Kathleen Bradley explained that the auditor’s contract is renewed every three years, at which point a vote is necessary. The motion passed with 259 votes for, 6 against, and 4 abstentions.

Divestment from the occupation of Palestine

The motion proved contentious, with students speaking strongly both in favour and against.

A U2 Management student asked those in attendance to “[move] away from rhetoric and [look] at the actual words in the motion,” and said that “voting yes will institutionalize this deep divide.”

Several others opposed the motion on the grounds that it was affiliated with the Boycott, Divestment and Sanctions (BDS) movement, an international campaign that aims to put economic pressure on the state of Israel in protest against its occupation of the Palestinian territories in violation of international law.

U3 Arts student McKenzie Kibler said that to argue that the motion was unrelated to BDS was “insulting the intelligence of students.”

U3 Management student Dina El-baradie responded that the motion did not include an academic or cutural boycott of Israel, and added that the motion in no way questioned Israel’s right to exist, instead merely seeking McGill’s financial disassociation.

“We’ve picked a side – we’re invested in these companies,” she said. “Divesting means disassociating [ourselves from the occupation], and we’re going to be neutral afterward.”

“As McGill students, we are not neutral,” agreed Science student Zain Ali Syed. He cited SSMU’s constitution, which states, “SSMU commits to demonstrating leadership in matters of human rights [and] social justice.”

An anonymous U2 Science student said that as a Palestinian, he is directly affected by the issue. “As a Palestinian at McGill, I am complicit in oppressing my own people.”

Zahra Habib, a U1 student in Middle Eastern Studies and Urban Planning, called on students to question their reason for attending the GA. “I want people to do a lot of self-reflection on why [you are] here,” she said. “If you’re against violence against innocents, you’re for this motion – I have no doubt everyone here is.”

After roughly 45 minutes of debate on the motion, a motion to end debate passed. Syed motioned for a secret ballot, voicing concerns that students might face hostility from their peers based on their choices. This also passed.

After an hour-long voting procedure, the main motion was defeated, with 212 votes for, 276 against, and 9 abstentions. After the results were announced, the vast majority of students present left the GA.

Laura Khoury, member of the “yes” campaign for the motion, spoke to The Daily after the vote.

“Nobody was able to dismiss the fact that the occupation and expansion of settlements was illegal, and nobody could refute the fact that we are complicit in aiding illegal actions. I call on everyone to reflect on their vote to stay complicit, because while you do have a home to go back to every day, many Palestinians don’t as a result of our complicity.”

Jordan Devon, a member of the “no” campaign, also reacted to the outcome of the vote.

“After two failed motions regarding this particular topic this year alone, I hope that students who stand on the other side of this debate understand that two pages of ‘whereas’ clauses accompanied by 18 citations do not summarize the complex realities of geopolitical conflict, and that passing motions like these will change nothing in the Middle East.”

The assembly continued by addressing the issue of illegal unpaid internships with a motion calling on SSMU to stop promoting such positions and lobby McGill to do the same. The motion was brought forward by NDP-McGill and several SSMU councillors.

The final ‘resolved’ clause, which mandated SSMU clubs and services not to “promote, recruit for, or facilitate any internships that contravene applicable employment laws,” sparked considerable debate. Some expressed concern that this would provoke further frustration on the part of club members, some of whom already resent the breadth of SSMU regulations.

SSMU Engineering Representative Scott Conrad brought forward a motion to strike this clause, still expressing concern over the potential negative impact of such a proposal on SSMU’s relationship with its affiliates. He later changed his amendment to only strike clubs, not services, from the clause. This amendment failed.

Attendees eventually decided to divide the question, voting on the section pertaining specifically to clubs separately. Both parts of the motion passed with the first segment garnering 75 votes for, 8 against, and 19 abstentions, and the second also taking a clear majority.

The final motion on the table concerned the financial accessibility of education, calling on SSMU to adopt a policy in support of accessible education.

Several of those who opposed the motion mentioned the recent decision to raise tuition for students from France to the level of those from out of province. They argued that, given the provincial government’s current deficit, this measure had not been unreasonable.

Moustaqim-Barrette responded to these concerns, reminding those present that the decision to raise French students’ tuition had already been made, and that the current motion addressed the imminent prospect of tuition deregulation for all faculties and for out-of-province students.

Speaking against the motion, Kibler accused Moustaqim-Barrette of “fear-mongering.” Out-of-province tuition was unlikely to be raised significantly, he said, as competitive fees were useful for attracting students. He also argued that the clause mandating SSMU to mobilize against austerity was dangerous, as it would enable SSMU to create a mobilization committee, join the Association pour une solidarité syndicale étudiante (ASSÉ) student federation, and eventually call a strike GA.

Moustaqim-Barrette dismissed Kibler’s allegations. The administration has already announced its intention raise tuition to the highest levels allowed by the market, she said. She also noted that an anti-austerity mobilization committee has already been formed within SSMU, and that SSMU is not eligible for ASSÉ membership because it lacks a “sovereign GA.”

One Law student argued in favour of the motion. He noted that many other Quebec universities have taken action against austerity, and called the motion a “really benign” way for McGill students to participate in the collective struggle.

A motion by Chin to divide the question on the grounds that the resolved clauses were fairly unrelated failed. The main motion passed, but as there were only 97 voters present, the 100-person quorum requirement was not met. The motion will thus be brought to SSMU Council for debate and approval.

A motion to “stand in solidarity with students and protesters demanding democratic government worldwide, in particular, Hong Kong,” tabled at the Fall GA, was expected to be moved from the floor. However, some of the movers withdrew their support and the motion was not brought forward.

Most remaining students dispersed at this point, and the assembly adjourned at 5:00 p.m. after hearing the executive reports.