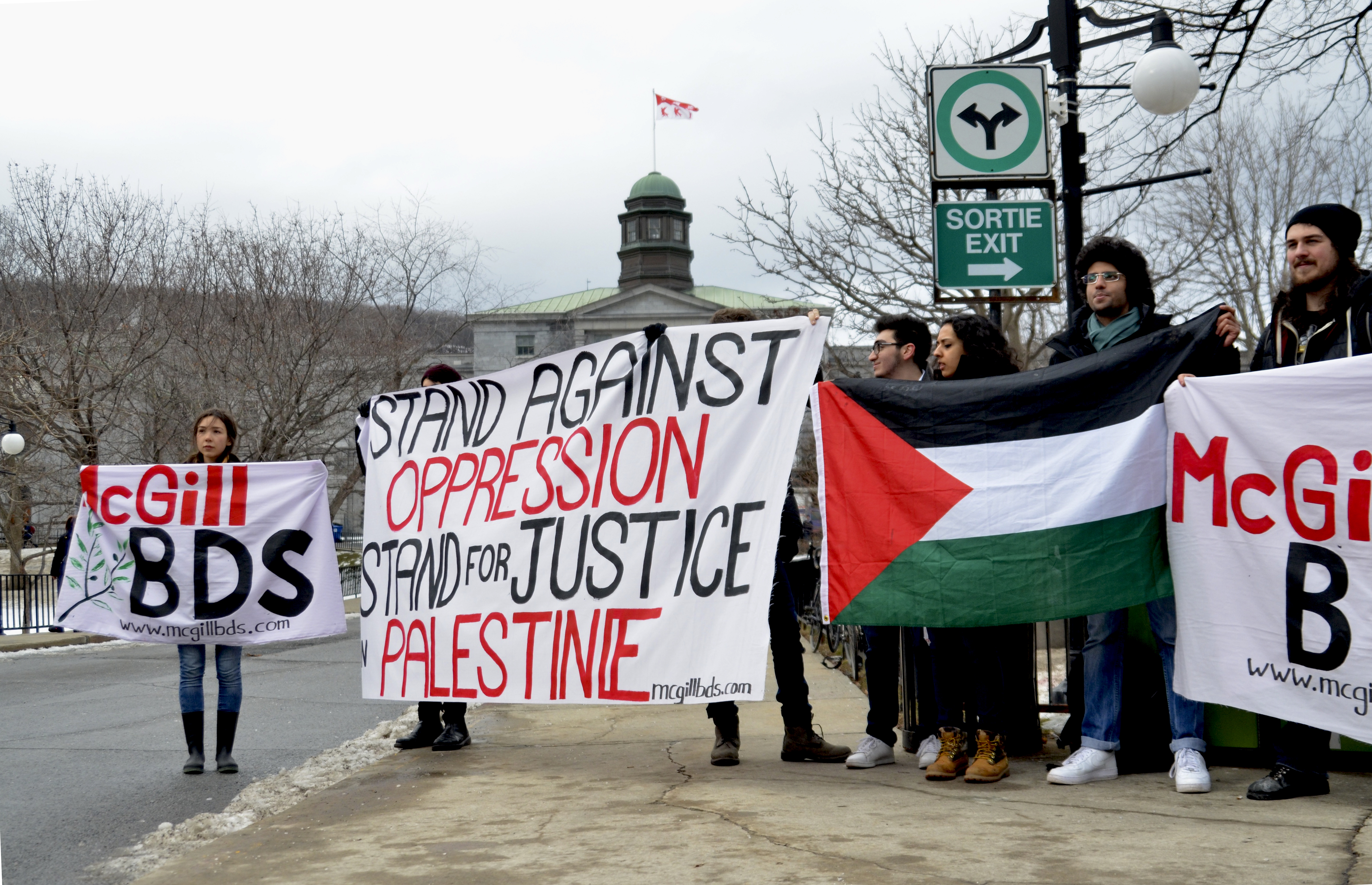 On February 4, a group of McGill students and student organizations, called McGill BDS Action Network, brought the global Boycott, Divestment, and Sanctions (BDS) movement to campus by launching a BDS campaign at McGill.

In an interview with The Daily, Laura Khoury, one of the organizers of the campaign, explained that the campaign “particularly calls on university campuses to divest from companies that profit off of the occupation of Palestine.”

“That includes any business activites that allow these companies to profit off of anything that the State of Israel uses to continue to expand its occupation and its settlements on occupied territories, which is against international law,” Khoury said.

For its first action, the campaign held a demonstration at the Y-intersection on February 4, handing out flyers to passers-by with information regarding the campaign. In addition, the demonstrators held a sign stating, “Stand against oppression, stand for justice in Palestine.”

The demonstration was also accompanied by the launch of a website, detailing the goals of the campaign.

“That includes any businesses that allow these companies to profit off of anything that the State of Israel uses to continue to expand its occupation and its settlements on occupied territories, which is against international law.”

According to Khoury, the campaign is also attempting to bring these investments to the attention of the McGill Board of Governors’ Committee to Advise on Matters of Social Responsibility (CAMSR), which could consider recommending divestment if the McGill community proves that the companies’ business activities constitute “social injury.”

Members of the campus environmental justice group Divest McGill have been attempting to appeal to CAMSR in a similar fashion since 2013, asking that McGill divest its holdings in tar sands and fossil fuel companies.

At this point, the BDS campaign is officially endorsed by many groups, including the McGill Syrian Students’ Association, McGill Students in Solidarity with Palestinian Human Rights, Cinema Politica McGill, Midnight Kitchen, the Black Students’ Network of McGill, Divest McGill, the Union for Gender Empowerment, and McGill Students for Feminisms.

Apart from appealing to CAMSR, however, the campaigners are also planning on bringing up a BDS motion at the Students’ Society of McGill University (SSMU) Winter General Assembly (GA) on February 22. Two motions regarding Palestine were brought up at the two GAs in the previous academic year. The motion brought up at the Fall 2014 GA was tabled indefinitely, while the one brought up at the Winter 2015 GA was voted down.

Another organizer with the campaign differentiated the upcoming motion from last year’s motions regarding Palestine. The upcoming motion will explicitly call on SSMU to support BDS campaigns on campus, and to lobby the McGill Board of Governors to divest from corporations deemed complicit in the occupation of the Palestinian territories.

“We created this campaign to […] raise awareness on campus about the motion, for students to both get a background and to mobilize, and to come to the SSMU GA and vote – regardless of whatever side they’re on,” Habib told The Daily.

Between now and the Winter GA, the campaign will be holding various events, including a talk on BDS and anti-Semitism by Rabbi Cantor Michael Davis on February 18, a screening of Palestinian short films by Cinema Politica on February 17, and a “Concert for Justice” on February 20.

Fuad Quaddoura, a U0 Science student and a Palestinian himself, expressed that he was glad to see students mobilizing around this issue.

“I was headed to my math class, and seeing this was an eye-opener. I was really happy, pleased. The fact that so many people – Palestinian, non-Palestinian, white, all races – are signing up for the cause is just really heartwarming,” Quaddoura told The Daily.