Dawn of a new space age 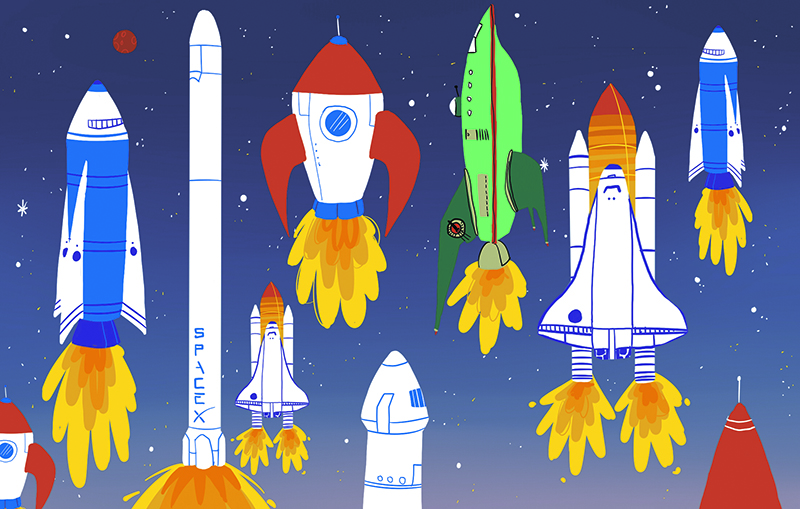 Since NASA’s Apollo program sent humans to the moon in 1969, human space exploration has been at a standstill. With no obvious signs of progress, humanity’s dreams of an exciting future in space have been put on hold indefinitely. Space travel is as expensive as ever and now that the Space Race is over, governments’ appetites for missions like the Apollo program – estimated to cost $160 billion CAD when adjusted for inflation – have waned. The root cause of this halt in progress is a fundamental technological limitation: rockets can only be used once.

From the very beginning of the space age, marked by the launch of the Sputnik 1 satellite in 1957, space travel has been constrained by the fact that rockets are single-use instruments. A rocket’s job is to carry a spacecraft beyond Earth’s atmosphere, at which point the spacecraft detaches from the rocket and fires its own engine designed for the vacuum of space. Once its job is done, the rocket tumbles back down to Earth, burning up as it re-enters the atmosphere. Any surviving pieces sink to the ocean floor. For this reason, each journey into space requires building a new rocket, with its short lifespan in mind. Predictably, sending humans and cargo into space has retained a prohibitive cost – currently $7,000 per kilogram. As long as the cost remains this high, space exploration will be limited to exorbitantly priced excursions conducted by a handful of astronauts. Until recently, at least, this was the status quo for space travel.

Now there is a new hope for humanity’s future in space. On December 21, 2015, the longstanding obstacle to space travel was finally surpassed. For the first time in history, a rocket landed back on Earth, fully intact, after detaching from its spacecraft. The rocket landing was achieved by SpaceX, a space exploration startup with a mission to radically reduce the cost of space travel. SpaceX’s CEO, Elon Musk, most famous for being the CEO of Tesla, has long argued that the ability to reuse rockets is “the fundamental breakthrough needed to revolutionize access to space.”

The rocket – called a Falcon 9 – lifted off from a launch pad in Cape Canaveral, Florida, carrying a spacecraft containing 11 commercial satellites. The rocket achieved a top speed of 5,000 kilometres per hour, one kilometre per second, during its upward flight before detaching from the spacecraft, which went on to deploy the satellites into orbit. The rocket then executed what Musk describes as a “screeching U-turn” in space. During its descent back down to Earth, the Falcon 9 rocket fired its engines to decelerate and finally slowed to a hover just before delicately touching down on the landing zone to the cheers of hundreds of SpaceX employees gathered at the mission control centre.

[With a reusable rocket] the cost of access to space will be reduced by as much as a factor of a hundred.

Driven by a vision of reusable rockets, SpaceX has attempted eight rocket landings since 2013. The first seven rockets were all destroyed on impact. The seventh attempt, on April 14, 2015, came tantalizingly close to success. SpaceX’s self-sailing ship — called Just Read the Instructions — served as a mobile ocean landing zone for an incoming Falcon 9 rocket. Ocean landings provide more flexibility in a rocket’s trajectory back to Earth, which is a requirement for higher velocity missions, even if the ship is a smaller target that rocks with the waves, posing a greater challenge than touching down on land. The seventh rocket reached its target with perfect accuracy, but came down too hard and broke one of its landing legs. It stood askew for a few seconds before toppling over, exploding spectacularly as it hit the ship’s deck. As SpaceX’s repeated failures attest, landing a rocket leaves little margin for error.

SpaceX’s successful landing of a rocket was the first, crucial step toward reusability. The next milestone is launching a landed rocket to prove that it can be used a second time. SpaceX will most likely make an attempt to re-launch a rocket this year if it can successfully land a second rocket; the first successfully landed rocket will be kept as a historical artifact. On January 17, SpaceX again attempted to, unsuccessfully, land a rocket on Just Read the Instructions.

To understand the significance of SpaceX’s achievement, compare space travel to air travel. “Imagine if aircraft were thrown away after each flight,” Musk said at an event at SpaceX headquarters in 2014. “No one could afford to fly.” A non-reusable rocket is like an airplane without any landing gear. At the destination, the passengers parachute off, allowing the plane to crash safely into the ocean. Tickets are exorbitantly priced, since tickets for one trip have to cover the full lifetime cost of the plane. This absurd wastefulness — and expense — has been the reality in space travel for nearly sixty years.

Reusable rockets open up the possibility of a new era of commercial space travel at the scale of present-day commercial air travel. Everything up until now has been a dress rehearsal.

Putting the numbers in context, the cost of commercial airplanes often exceeds the cost of a Falcon 9 rocket. For instance, a Boeing 747 airliner sells for $540 million, enough to buy six Falcon 9 rockets at $90 million each. At $300,000, the cost of refueling a Boeing 747 and a Falcon 9 are the same. A “single-use” airplane would cost several times over a standard rocket, it is only because of the airplane’s reusability that relatively affordable flights are possible. If, according to Musk, when rockets are no longer thrown away after every launch, “the cost of access to space will be reduced by as much as a factor of a hundred.” That is to say, the cost of sending objects into space will drop from $7,000 per kilogram to as low as $70 per kilogram: the economic barrier to space that has persisted since Sputnik will be drastically reduced.

Reusable rockets open up the possibility of a new era of commercial space travel at the scale of present-day commercial air travel. Everything up until now has been a dress rehearsal. It is now that we can finally say that the real space age has begun.