15 and Fair fights for living wage at McGill

SSMU supports campaign despite paying employees below $15 per hour 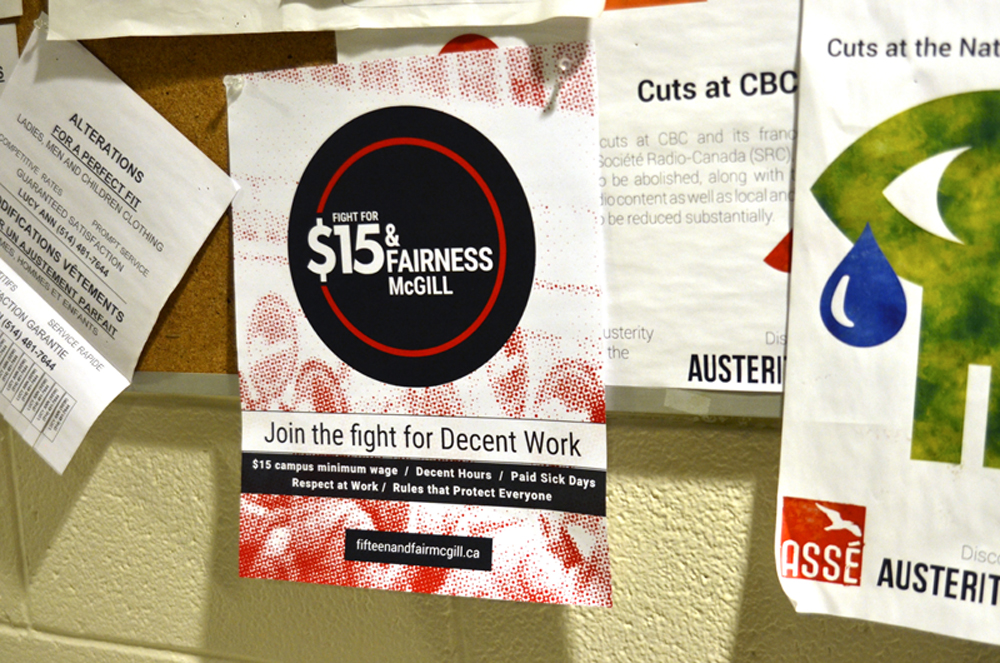 In Quebec, the minimum wage currently stands at $10.55 per hour. The goal wage of $15 is based on a study by the left-wing think tank Institut de recherche et d’informations socio-économiques (IRIS) that calculated the wage necessary for workers in Montreal to meet their basic needs, accounting for prices of necessities like rent and food. The campaign proposes a three-year timeline that would increase wages across campus in increments of about $1.80 per year.

“If you go to work-study job postings […] and just look at the amount of money [students] are being paid, it’s really low,” said Sean Cory, president of the Association of McGill University Research Employees (AMURE), one of the five participating McGill unions. “The students are being exploited,” added Cory.

In May 2015, the University was accused of the “casualization” of its labour force – replacing highly paid positions that include job security and benefits with minimum-wage positions that involve unpredictable or part-time hours and no benefits. McGill’s justification is the provincial government’s budget cuts to education. The University, however, declared a $4.3 million surplus in its 2014-15 fiscal budget.

“The students are being exploited.”

“To increase salaries at the lower end of the scale is not that much money, because [minimum wage workers are] not paid much to begin with. But it makes a huge difference on their lives,” Cory said.

“15 and Fair McGill” consists of a coalition of five McGill labour unions, as well as Midnight Kitchen, QPIRG-McGill and SSMU. Emily Boytinck, SSMU VP External, has been attending the “15 and Fair McGill” meetings as an “informal” member of the coalition. However, Boytinck told The Daily that despite supporting the campaign, SSMU only pays most of its student staff between $12 and $13 per hour.

“Obviously [SSMU is] coming from a very different position,” said Boytinck. “Instead of being a union that has the ability to fight for higher wages, we are managers that have the ability to increase our wages.”

“To put it in context, this year we’ve eliminated some permanent staff positions – our budget is very, very tight. And so to increase to $15 per hour right now would be extremely irresponsible for the staff that we have right now, with the budget that we currently have adopted,” said Boytinck. “I don’t want to say it’s not an option, but to do it with our current operating budget would be incredibly difficult.”
Boytinck maintained that it was nonetheless important for SSMU to voice its support for the campaign, even though she conceded that “at this point we’re still super hypocritical.”

“The increase of casualization on campus affects students, and it affects the services that students get, and it affects the overall culture of our campus,” Boytinck continued. “To have the student union be silent on this issue would be really unfortunate to the campaign.”

“I don’t want to say it’s not an option, but to do it with our current operating budget would be incredibly difficult.”

A $15 minimum hourly wage would mean that minimum-wage employees would only have to work two-thirds of the time they currently do to earn the same income, meaning that “they can put that energy and that time that’s freed up into their lives – their schoolwork, or their families, their social environment,” said Cory.

But some SSMU student employees are comfortable with their current wages. “There’s a lot of jobs that aren’t paid $15 and absolutely should be – but I also don’t necessarily think that it needs to be the standard,” said Emily Bilton, an employee at Gerts, in an interview with The Daily. “Especially at a place like SSMU where it’s giving opportunity for students who wouldn’t necessarily get a job outside, like a lot of anglophones.”

“I think the fact that we’re getting paid pretty comfortably above minimum wage in a [student union] that works completely around our schedules is a really great thing to start with,” Bilton continued.

Asked about whether it hinders the campaign to have support from a student union that pays workers below $15 per hour, Cory responded, “A bit. I think if you can show that you yourselves have made that effort and show you’re leading by example, it would help.”

“We would hope that by the end of this executive mandate, they have a timeline toward that goal, rather than a new executive coming in and having to start over,” he continued.
“We’re not trying to shove it under the rug. […] We are actively looking into it,” Boytinck emphasized.

Past and future of the movement

According to the “15 and Fair McGill” website, the fight for a $15 per hour minimum wage began in the New York City fast food industry in 2012, and spread rapidly to other low-wage industries. Over the last two years, the cities of Seattle, San Francisco, and Los Angeles have responded to mounting union pressure and protests by passing legislation to raise their minimum wages to $15 per hour. In May 2015, the newly-elected provincial New Democratic Party (NDP) made Alberta the first Canadian province to plan to raise the minimum wage to $15 per hour by 2018.

“We won’t have to fight against McGill if Montreal [or Quebec] as a whole decides to impose a $15 minimum wage.”

The fight for a higher minimum wage has long been connected to a goal of decreasing inequality on many fronts, since women and racial minorities are overrepresented among minimum wage workers.

“When we started there was no one else in Montreal that we could see that was working on this,” Cory said. “Now it’s starting to pop up more, and […] others in Montreal are getting involved.”
Cory said that the movement has so far focused on student mobilization, but the unions will be raising the issue at Senate and Board of Governors meetings, and during their negotiations with the University.

Cory added that the movement’s impact may extend beyond McGill’s campus. “We won’t have to fight against McGill if Montreal [or Quebec] as a whole decides to impose a $15 minimum wage.”