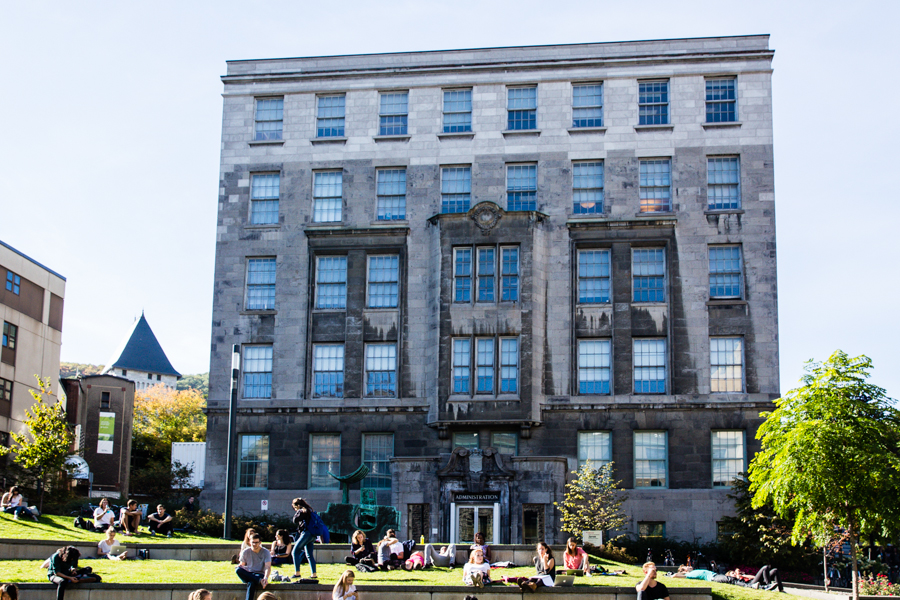 Roughly 50 people gathered at Community Square, in front of McGill’s James Administration Building, to celebrate International Workers’ Day on May 1 and to stand in solidarity with the academic and non-academic workers at the university. Organized by the Inter-Union Council of McGill, the rally included talks by community members, who spoke about the corporatization of the university and the effects of provincial austerity measures.

In an open letter delivered after the rally to the James Administration Building and signed by the event’s participants, workers and students of McGill “[condemned] the Administration’s attack on workers and [signalled] that [they] are united, strong, and prepared to fight back.”

The letter also condemned the closing of the McGill Life Sciences Library and the Education Library, the centralization and restructuring of Arts Faculty administrative offices, and the cutting of over 100 Arts courses. These actions taken by the Administration were used to justify “the abolishing of many full-time employment positions, diminishing the quality and collegial climate of undergraduate education, and contributing to tangible overcrowding in the McLennan and Schulich libraries.”

According to Sheehan Moore, an outreach coordinator at the Association of McGill University Support Employees (AMUSE) and the Association of McGill University Research Employees (AMURE), McGill is justifying its policy of casualisation with the provincial government’s budget cuts to education and the ensuing deficit. However, Moore characterized the deficit as “non-existing,” referring to University’s recent declaration of a $4.3 million surplus in its 2014-15 fiscal budget.

While originally forecasting a $7 million deficit, Provost Anthony Masi announced the unexpected surplus at McGill’s Senate on April 22. Similarly, in the 2013-14 academic year, the University was expecting an operating deficit of about $10 million, but instead ran an operating surplus of over $15 million. Still, the University’s 2015-16 budget forecasts an additional $11 million reduction in the operating budget, to be mitigated by the continuation of cost-cutting practices introduced in the past two years, including casualisation.

“What [casualisation] means is the process by which good, well-paid, stable jobs are destabilized and replaced by temporary and precarious jobs, with fewer benefits et cetera. At McGill, this instability takes the form of short-term contracts, constant contract renewals, [and] unreliable schedules,” said Moore.

Moore explained that AMUSE’s collective agreement with McGill expired on April 20, although it will remain in effect until a new bargain is struck. The union will begin negotiating with the University in May.

Addressing the crowd at the rally, McGill worker and member of the AMUSE bargaining team Agatha Slupek declared on behalf of the Inter-Union Council that “unions at McGill will be joining [their] comrades in the fast-food and retail industries [in calling] for a $15 campus-wide minimum wage.”

Speaking to the crowd, assistant professor of political science Yves Winter contextualized the circumstances at McGill within a broader process of neoliberalization, “[which] positions the university as a big enterprise. […] It treats students as consumers, and it treats education as commodity.”

Mona Luxion, AGSEM (McGill’s Teaching Assistants Union) Mobilization Committee Chair and a member of Demilitarize McGill, said: “We all live under an economic system that is based on the exploitation of the vast majority of the people for the profit of a few. […] I want to acknowledge that many of us are insulated from the brutality of that system through what we call the welfare state, where a little bit of that profit is redistributed to people in the form of education and healthcare and social services.”

“So [the austerity] we’re seeing this spring – and this is part of a [larger] movement in the Quebec government, in the federal government, [and] across the world – is rolling back this redistribution of any of the profit, so that the brutality of this system is exposed,” added Luxion.

“It involves conducting ourselves and training ourselves to hold power accountable and to build [a] kind of community on campus, to build on the community that we have to valorize it rather than undermine it.”