Who is the “typical college experience” for?

Molson Hall was an alienating show of whiteness and masculinity 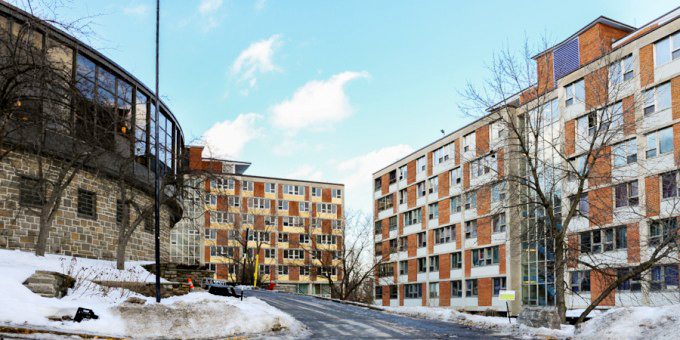 In the summer of 2013, I was very excited to come to McGill after the trauma that was going to school in a small, ultra-racist town in rural British Columbia. However, over the last two years, I have come to realize that white supremacy is not a problem that Montreal solves just by virtue of being an urban centre. While I have succeeded in finding the amazing communities I hoped for when I left home, rez was not where this happened. I was placed, unfortunately, in Molson Hall, and the experience proved to be a simple repetition of high school with the same social dynamics and microaggressions, only working more subtly. I may have lived in Molson, but I never belonged there.

Molson is a self-fulfilling prophecy: people choose it because of its reputation for partying, and the partying reputation exists because of the people that choose it. The Unofficial McGill Guide knows this, students know this, floor fellows know this, even the McGill administration knows this. But I didn’t until I arrived on campus. It seemed like most of the students in Molson were people who were popular in a few Toronto high schools; within the first few days, judgements had been made and cliques had been formed. Since I didn’t drink, smoke, do drugs, or have casual sex, I was again a “loser,” back at the bottom of the social hierarchy where I had been throughout high school.

I was in for a rough year. In the evenings, I detested going back to rez as people would be outside – smoking, staring, judging. On weekends, I felt uncomfortable leaving my room to use the bathroom, since I was in my pyjamas and everyone else was pre-drinking in the hallways. I remember one of my only friends in rez telling me, “Maybe there is something wrong with us, not them.”

To be clear, nothing is wrong with people’s decisions to smoke, drink, or have sex. What’s wrong is the power wielded to those who engage in these behaviours over those who don’t, hierarchies created based on partaking in these behaviours and the exclusion of those who choose not to. I didn’t go to a single party in Molson, and it’s not because I never wanted to or wasn’t at least curious, it was because I knew I would be unwelcome – the alcohol, the bro culture, and the whiteness would just be overwhelming.

Double standards of sexual activity do not offer women the same benefits offered to men when it comes to sex.

White people, statistically, are the largest consumers of alcohol. Growing up, my family didn’t consume alcohol, and before I came to McGill, I didn’t know the difference between vodka and whiskey. In Molson, drinking was the only form of fun, and reducing the risk associated with drinking and other risky behaviours seemed to be the floor fellows’ only priority. This was alienating. I don’t mean to say this to take away from the incredible work that floor fellows do every day in residences to make residence life safer, and my floor fellow was incredibly supportive of my “anti-Molsonian” decisions. Looking after students, whether they partake in risky behaviours or not, is an incredibly important component of floor fellows’ values of harm reduction, and I firmly stand behind them in their ongoing fight for a fair collective agreement.

However, it does seem like the residence system imagines a certain type of student, and this prototype is white and “bro-y,” drinks, smokes, and has a lot of sex. While it is important to reduce the risk associated with potentially risky behaviour, and the classic “use a condom” or “drink water” advice is pertinent for many, it is equally important to create an environment where people can feel safe and at home even if choosing not to engage in those behaviours.

Furthermore, while promoting non-judgement and trust within residences is crucial, it is also important to note that choices made in rez are not made in a vacuum, but in an environment stifled by the pressure of performing the social script of “Canadian college life.” Drinking and having sex, then, is not only about making one’s own choices, since they occur in a context where everybody is desperately trying to fit in and create a home away from home. A friend of mine from Molson, for example, tried hard to be a true “Molsonian” in her first semester – she drank, she partied, she hooked up. Come second semester, she gave up because “it was too fake, it wasn’t me.”

There need to be more resources in residences for students who don’t fit in or feel comfortable with the rez party culture – the absence of this support centres certain students over others and further alienates the rest. The residence system – the students who fill it, the floor fellows who lead it, the administration that runs it, and the alumni who pass on its culture – is complicit in perpetuating these dynamics by uncritically accepting the centrality of certain behaviours to the residence experience.

The residence system is complicit in perpetuating these dynamics by uncritically accepting the centrality of certain behaviours to the residence experience.

Much has been written in recent years about the so-called “hookup culture” on university campuses. In Molson, it was assumed that you were fucking, because, well, that’s what people do in college. Potential sexual partners were only a few rooms away, parents were hundreds of kilometres away, and everyone had a single room. Overall, the message that I got my first year was a confirmation of what Hollywood had told me earlier: if I wasn’t hooking up, I was missing out on an important part of the college experience. Not everyone, however, gets to participate in and benefit from hookup culture to the same degree. Generally, hookup culture offers the most benefit to white, cis, heterosexual, able-bodied men, and there was an endless supply of them in Molson.

Double standards of sexual activity do not offer women the same benefits offered to men when it comes to sex. While bros “score,” women can’t sleep with too many people, otherwise they’re sluts. Our idea of sex is centred around male pleasure; statistically, women are widely dissatisfied with their casual sexual experiences. Furthermore, only certain types of sex for certain bodies constitutes the rez-approved definition of scoring, because the heteronormative residence hookup culture completely erases queer experiences. Queer men cannot be part of bro culture because, well, they’re gay. Queer women are fetishized by the straight male gaze, and other people with queer identities are simply erased. In a system where social status is awarded to men who have sex with the most women and women who have sex with the ‘right’ number of men, nothing else counts.

Finally, rez is very white. Racialized women are not only subject to the virgin/whore dichotomy with respect to their number of sexual partners; we are also subject to power dynamics related to our ethnicity or religion. In Molson, a white man really wanted to sleep with me because I was Iranian – and therefore Muslim, because all Iranians are Muslims, right? – and since Iranians/Muslims “don’t sleep around,” my racialized sexuality made me ‘hard to get’ and banging me would present him with a bigger bragging right. On the other side of the spectrum, a Black friend from another residence told me that she was having difficulty navigating her sexuality in a culture filled with images and stereotypes of hypersexualized Black women. I firmly believe that floor fellows can be empowered to solve this problem. Much would be improved if racialized floor fellows were given more support, and students of colour were given space by the residence administration to address racism in rez.

The bros that I’m talking about will dismiss this commentary as “just another Daily article,” and that is exactly what male entitlement and white fragility looks like. The white man can walk into rez wasted at 3 a.m. and yell in the hallways, puke in every sink in the communal bathroom, leave the toilet unflushed, throw thumbtacks on floors, urinate in the elevator, or hide all the toilet paper in the bathtub, walk into other people’s rooms naked with no consequence – and yes, all of these have happened. Too male, too white, too straight to worry about the implications of his actions in a broader context, because, well, there aren’t any (for him). My first year in rez was just this, an extension of high school, a 24/7 live show of toxic white masculinity.

Paniz Khosroshahy is a U2 Women’s Studies and Computer Science student. To reach her, email paniz.ksy@gmail.com.