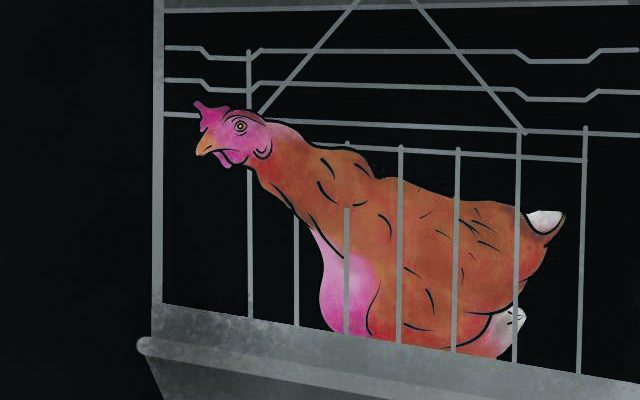 When I mention my food choices, it often leads to questions like “Really?,” “Are you serious?,” and “Why?” There is also the common statement “Wow, that is so cool!”

Is being a vegetarian really that cool? And why is it so surprising? I find these types of questions odd because they imply that critical thinking regarding daily choices is unusual and abnormal.

I became a vegetarian about four years ago, when my family and I watched the Michael Pollan film Food Inc.. From that point on, all four of us became vegetarians. I was initially reluctant to follow suit, yet, as time went on, it became easier and easier to avoid meat products. I have essentially lost my appetite for meat, and, in general, the purpose for maintaining my eating habits has shifted from one of nutrition to one of ethics.

In Canada – like in the U.S., where Pollack’s film is set – there are many issues with the meat and produce industries. Animals are raised and slaughtered inhumanely, large companies take advantage of independent produce farmers, and farm fishing has a profound environmental impact. The practices of large food corporations are reducing this essential aspect of life – food – to pure capitalist terms of production cost without regard to animal cruelty and environmental degradation. As I became aware of these issues, I altered my food choices to reflect the fact that I did not want to continue supporting the unethical practices of the industry through my actions. While this in and of itself may not be extremely effective in the face of such a systemic issue, I find it important to align my actions with my values.

Based on this, my rationale for vegetarianism has developed into a kind of mindful cleanliness I now associate with what I eat. The nutritional content of my food is no longer the sole indicator of its value; its source and the manner of its production are integral to how I consider what I eat. Although knowing the origin of food products in our highly globalized society is not always possible, I am making the effort to balance the knowledge I have and the information available to me. I am taking the time to reflect on the implications of my choices.

I am in no way militant about my choice; I don’t believe that others are immoral for choosing to consume meat products, and I understand that not everyone is in a privileged enough position to have a lot of choice in what they eat. I also recognize that in a place like McGill with an international student body, there are people who come from places where this is less of an issue: they may be able to purchase products from a local butcher, or their local meat industry is highly regulated, or perhaps they or someone in their families are able to humanely farm and consume animals.

I do find it strange, however, that the fact that I make conscious choices about my food is met with surprise. We make conscious decisions about the nutritional content of our food and its calorie and vitamin counts, or about the way it is prepared. Why don’t the source and production of our food deserve the same attention? Only by reflecting on the ethical implications of our daily choices can we make sure that our actions align with our values.

I don’t expect everyone to make the same choices as I do. However, I do find it unfortunately common for people to make decisions that violate the ethical values they claim to maintain. Instead of merely continuing to make decisions without reflection, I urge you to think about the implications of your actions and whether you are in a position to change them. Maybe, if more people did, being a vegetarian wouldn’t be such a surprising thing.

People who choose to be vegetarian due to their ethical convictions often do so because they want to change the system of factory meat production. But is vegetarianism the best means toward stopping the horrific treatment of animals in factory farms? Can more moderate methods such as ‘humane’ meat consumption be employed to the same end?

The advocacy for ‘humane’ meat consumption is often presented as an alternative to vegetarianism, but this approach is fundamentally contradictory. This becomes clear from looking at the definition of humane found in Canadian law, which stipulates that “no food animal shall be handled in a manner that subjects the animal to avoidable distress or avoidable pain.” However, in clear contradiction with this clause, Canada’s federal Meat Inspection Regulations explicitly allow for an electrical prod or goad to be used on any animal body part other than the “anal, genital, or facial region,” and for animals destined for the slaughterhouse to go unfed for just shy of a day.

Other ‘humane’ labels such as “free-range” are equally empty. According to a Globe and Mail article, most free-range chickens have just as little space as their caged counterparts, and, since their excrements are not removed from their shelters, they are more apt to develop diseases and infections. The most comprehensive definition of humane treatment, from People for the Ethical Treatment of Animals (PETA), would be a great improvement to the lives of most factory animals, as it would mean that the animals have access to fresh air and sunlight, are not mutilated without painkillers, and are not separated from their offspring.

However, even this approach is inadequate, as it does not take animal consciousness into account. In 2012, a group of prominent neuroscientists published the Cambridge Declaration on Consciousness, in which they conclude that “non-human animals, including all mammals and birds […] also possess these neurological substrates [that generate consciousness].” Given that cows are aware that they are alive and are able to feel emotions, however well they are treated before they are butchered cannot justify the fact that they are being killed.

One person’s decision to go vegetarian will not effectively bring down the meat production system. Rather, it would require everyone to make the same decision, as meat production will continue as long as there are people willing to buy its products. Clearly, a single individual’s decision is insufficient to tackle the complex social and cultural factors that motivate people to prefer meat over vegetarian products.

A broader educational approach is necessary to effectively change the omnivorous tendencies of our society. Although it is important to shield kids from the horrors taking place in most factory farms, the idea of vegetarianism can still be discussed and explored. For example, if, after having been read the story of the three little pigs and the big bad wolf, I had been led to consider that the big bad wolf was “bad” for eating members of a different species, I would have started to question my meat-eating habits much earlier.

Vegetarian education can also play a crucial role in the lives of university students. Since many of us have just moved out of our parents’ homes, we’re faced with much more freedom concerning our dietary choices than before, and many choose a vegetarian lifestyle during their university years. At McGill, the Herbivore Society for Peace and Justice aims to facilitate discussion about the practical and moral aspects of veganism and vegetarianism, and the Midnight Kitchen serves pay-what-you-can vegan lunches every weekday.

Another option to consider is the advocacy for legal change. Some may dismiss the idea of making meat production illegal as a breach to personal freedoms, but it deserves some thought. Cannibalism is viewed as a crime, and not a dietary decision, so why is killing animals – who feel pain and emotions like we do, though they may lack the complex communication skills to make this apparent – not a crime? Of course, such legal changes are only justified in regions where a healthy vegetarian diet is possible and accessible, and must be planned judiciously so as not to abruptly cut the jobs of meat-factory workers without presenting them a viable alternative, but these changes are not impossible.

Becoming a vegetarian is an important and necessary step that follows an individual’s realization of our society’s horrific treatment of animals. Ever so slightly lowering the demand for meat is a positive thing, and does make a difference. However, a broader approach remains necessary to bring down the meat industry.

Elisha Aaron is a U0 Art History student. To contact him, email elisha.aaron@mail.mcgill.ca.

Camille Malard is a U1 Microbiology and Immunology student. To contact her, email camille.malard@mail.mcgill.ca.

It's easy! You can email the editors at commentary@mcgilldaily.com!