No celebration of imperialist and colonial violence on campus 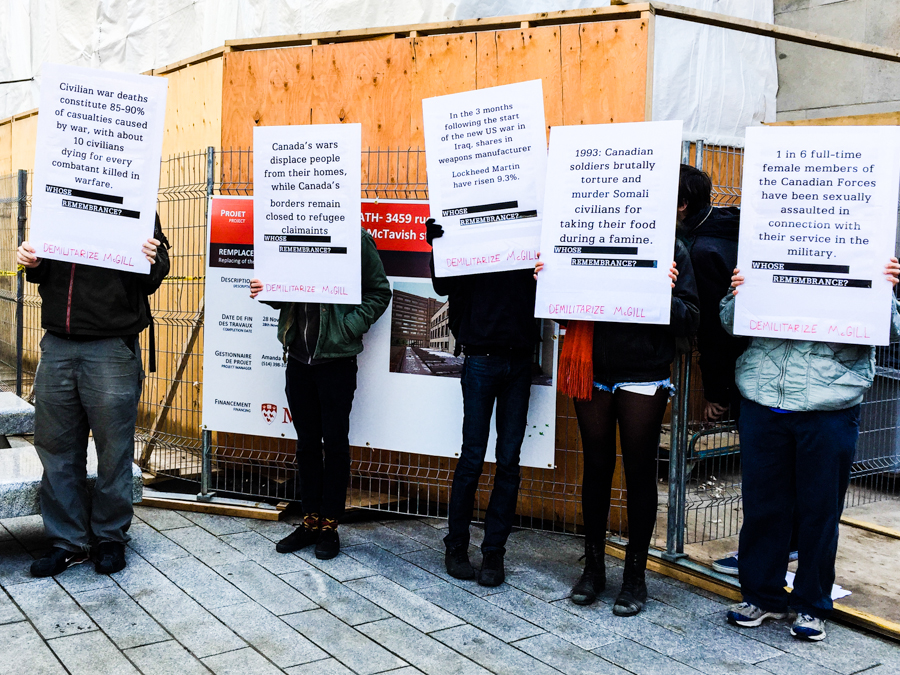 Every year, on November 11, the Royal Canadian Legion brings active and veteran members of the Canadian Forces and the Royal Canadian Mounted Police (RCMP), artillery, armoured vehicles, and other weapons to McGill’s downtown campus for Montreal’s annual Remembrance Day ceremony. We respect the wish of veterans to mourn and never let the horrors of war be forgotten. Yet we doubt that their cause is served by mythologizing the exercise of military power rather than reflecting openly on its real effects, and by leaving no space to question whether Canadian society – which inflicts violence and dispossession on so many – was ever worth dying for. Remembrance Day’s glorification of military service and uncritical celebration of the Canadian state support the agenda of the political class that wants the discretion to dispatch troops to kill and terrorize in defence of its own interests.

Regardless of any individual acts of bravery and self-sacrifice that military personnel may have committed, the legacies of Canadian military and police institutions are imperialism, genocide, and tragedy, not the triumphant heroism that the official history proclaims. In view of McGill’s location on unceded Kanien’kehá:ka territory, over $1 billion in unpaid loans owed to the Kanien’kehá:ka people, and continued violation of the Kaia’nere:kowa (the Great Law of Peace) through contributions to weapons development, it is necessary to remember that the RCMP has been perpetrating anti-Indigenous violence and surveillance throughout the territory claimed as Canada, ever since it was founded in 1873 to patrol Indigenous communities in the northwest and facilitate settler colonialism. Furthermore, while policing is inherently violent, the RCMP has reserved heightened brutality for Muslim Canadians: through the “Project O Canada” investigation, faulty evidence from the RCMP led to the rendition and torture of innocent men including Canadian engineer Maher Arar, tortured in Syria.

Because of the ongoing history of imperialist and colonialist violence caused by the Canadian military and police, and because of McGill’s ongoing colonial legacy as well, it is unacceptable for the Remembrance Day ceremony to take place on McGill’s campus.

Meanwhile, the Canadian Forces have been involved in imperialist conflicts abroad for over a century and have enforced colonial expansion on the land occupied by Canada. Twenty-five years ago this year, the Canadian Forces deployed infantry, mechanized vehicles, and reconnaissance aircraft at Ka’nehsatà:ke against Mohawk Warriors who were defending their land against a planned golf course expansion. Abroad, they have killed and tortured civilians, as in 1993, when Somali civilians were caught taking food from Canadian soldiers during a famine. In their own ranks, one sixth of full-time female members have been sexually assaulted in connection with their service in the military. These atrocities are not anomalies, but are fully in line with the Canadian Forces’ colonial, white supremacist, patriarchal, capitalist project.

During last year’s Remembrance Day ceremony at McGill, in a silent protest on the steps of the Redpath Museum, a few people held signs stating facts about the Canadian Forces that were deemed unworthy of remembrance in the official ceremony. The aggressive reaction this generated from part of the McGill community unfortunately further demonstrated that Remembrance Day as it exists is based on forcefully erasing any realities that contradict the story the Canadian state wants to tell about itself. Why else would merely asserting facts that are not otherwise discussed on the day, without interfering in any way with the planned ceremony, produce such a virulently angry response?

Because of the ongoing history of imperialist and colonialist violence caused by the Canadian military and police, and because of McGill’s ongoing colonial legacy as well, it is unacceptable for the Remembrance Day ceremony to take place on McGill’s campus. To bring the same sorts of armoured vehicles used against the Kanien’kehá:ka at Ka’nehsatà:ke onto a campus that was itself stolen from the Kanien’kehá:ka is nothing short of a spectacle celebrating colonial rule. A ceremony uncritically supporting the Canadian Forces and the RCMP cannot help but erase horrific violence in the name of the Canadian state toward women, toward Indigenous peoples, toward people of colour, toward nations exploited by colonialism, and toward the international working classes.

As people who desire a world without wars of domination and conquest, which means a world without militaries and police, we will not remain passive in the face of the real effects of this spectacle, which seeks to enlist every Canadian and McGill student into its revolting narrative of inalienable military honour. If the ceremony this year takes place on McGill’s campus, students and others will again form a presence dissenting with the vision of remembrance imposed by the ceremony.

The two anonymous authors are working to end military research and collaboration at McGill. They can be reached at msv@riseup.net. In addition to this article, they have issued a call to direct action on campus available at demilitarizemcgill.com.