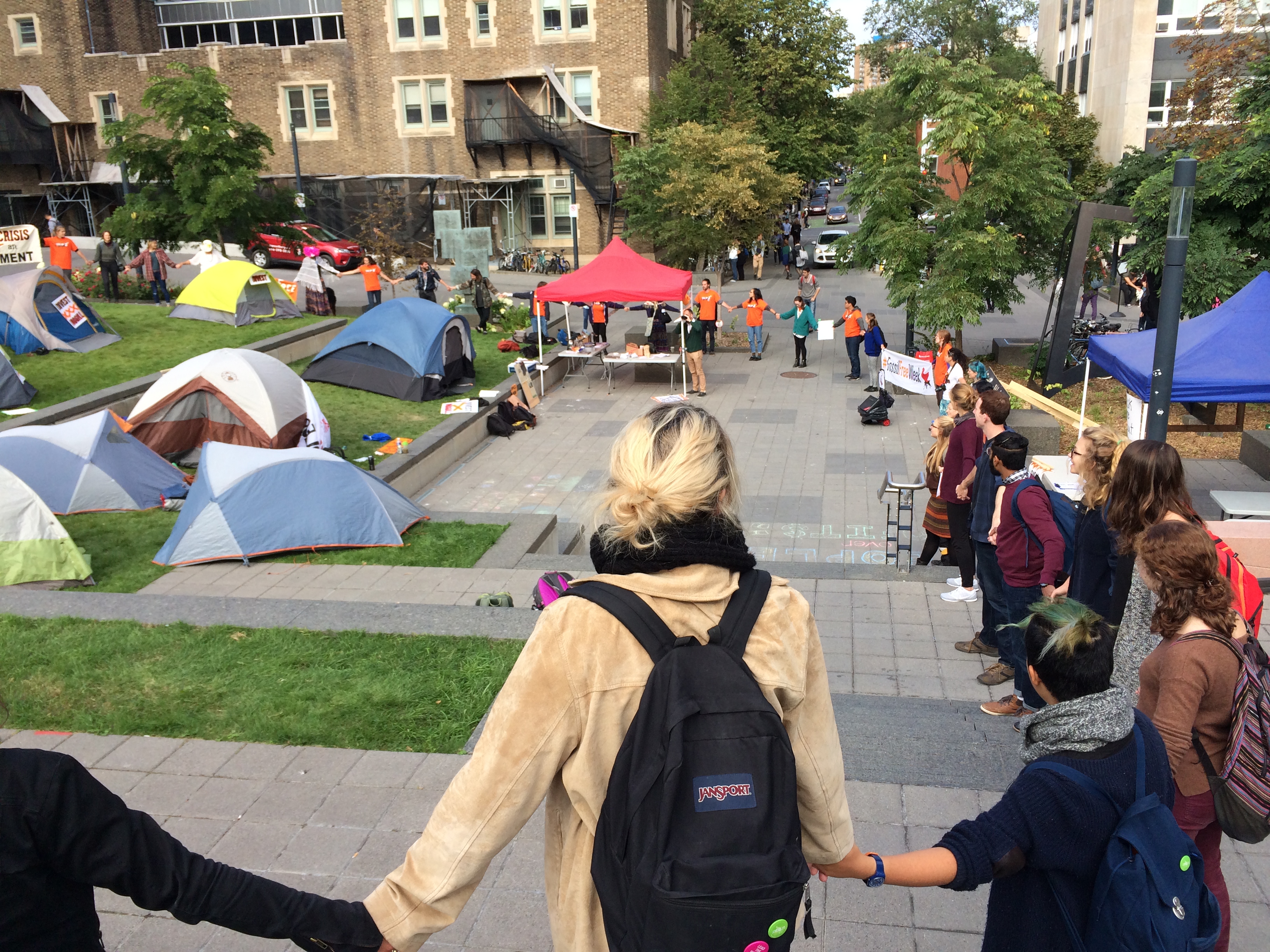 As Divest McGill’s Fossil Free Week came to a close, about seventy members and supporters met at McGill’s Community Square for a final rally at 3 p.m. on Friday, September 25. Led by Julianna Duholke, an organizer with Divest McGill, speakers took turns offering closing comments in regards to the week, which included a camp-out in front of the James Administration building and a protest march on the CBC–Radio-Canada building, where the French-language federal elections debate was held on September 24.

McGill alumnus Curtis Murphy, a founding member of Divest McGill, expressed pride in the growth of the organization. Recalling how there were originally about six people involved when initiating their first petition to be presented to the Committee to Advise on Matters of Social Responsibility (CAMSR), Murphy explained how the group had stood the test of time.

“The administration miscalculated in thinking [Divest McGill] was going to be just another student organization, and people are going to graduate and it’s going to fizzle out, but it hasn’t happened – the opposite happened. There’s even more energy,” Murphy said. “Their inaction just looks worse and worse. And sooner or later, they’re going to have to do something.”

Murphy also mentioned how he joined other alumni in pledging to return his degrees if McGill doesn’t take divestment action by March. “I was really excited to be able to join in the pledge […] as a statement of how we feel about McGill’s inaction on this really important issue.”

In addition to the speeches, the rally included a performance of two songs, one in French and one in English, by three members of the Raging Grannies, (a group of activist elder women who attend and sing songs at protests) who came to support the organization’s cause.

The event concluded with the participants forming a symbolic circle around the square, joining hands to chant their slogans one last time.

“I think the closing rally today was very powerful,” commented Laura Cameron, a Divest McGill member. “We were able to sum up the whole power of the week and […] have the principal notice us outside her window.”

As for the week’s impact and the response received, Cameron said, “We’ve achieved our goal in educating the McGill community at large. In terms of the administration’s response, we’ve definitely had victories there as well.”

“Although [Stuart] “Kip” Cobbett, the Chair of [CAMSR and the Board of Governors] is away, we’ve interacted with a few of the other members of the committee and […] they definitely felt the pressure,” noted Cameron.