Protestors rally ahead of federal debate 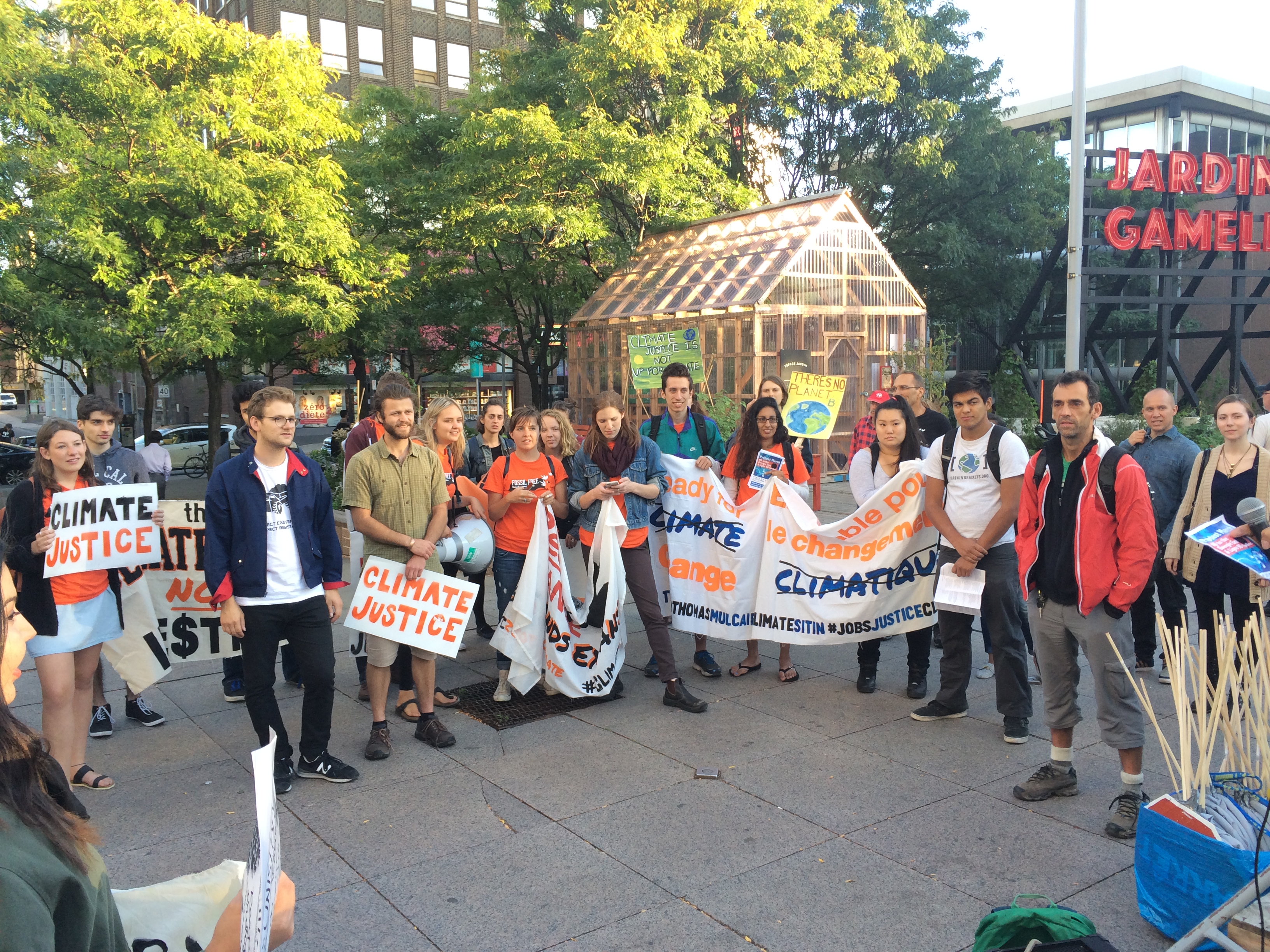 At 5 p.m. on September 24, approximately 25 people in support of Divest McGill’s Fossil Free Week initiative gathered at McGill’s Community Square and marched toward Place Émilie-Gamelin to partake in a broader demonstration in front of the CBC–Radio-Canada building before the 2015 federal election’s French-language leaders debate. Many groups seized the opportunity to raise their voices and be heard by the Canadian political class.

The Daily spoke with Julianna Duholke, an organizer with Divest McGill, shortly before the rally began. “We’re seeing this huge gap between policy and climate science at both the McGill level and at the federal level,” explained Duholke. “If McGill steps up to be a climate leader, that could put pressure on our political leaders, but right now, there’s no pressure coming from the bottom, and we’re taking that upon ourselves.”

Laura Cameron, another organizer with Divest McGill, commented “We had a very pretty embarrassing reaction from [Principal Suzanne] Fortier today, where she […] pretty much tried to walk away from us when we confronted her, without talking to us. And she said that she […] could not commit to supporting a freeze on fossil fuel investments.”

Amongst the groups present at the protest was 350.org, represented by Cree activist Clayton Thomas-Muller, the organization’s Indigenous Extreme Energy Campaigner. Thomas-Muller was vocal about his hope for a grassroots change beginning in Quebec.

Speaking to The Daily, Thomas-Muller said, “Our message as 350[.org] is to support social movements in Quebec that have mobilized to disrupt tar sands infrastructure.”

Thomas-Muller continued, “We need divestment from dirty fossil fuels, we need a reinvestment of these resources into a zero energy footprint economy that doesn’t force Canadians and First Nations to sacrifice certain communities at the altar of irresponsible economic policies.”

Many other groups expressed their concerns with the legacy of Prime Minister Stephen Harper’s Conservative government with regards to other issues. Marie-Hélène Arruda, coordinator of the Mouvement autonome et solidaire des sans-emploi (MASSE), an organization dedicated to supporting the unemployed, was critical of the government’s direction in the matter of employment. “We have to pay attention to the Conservatives’ [actions] over the past few years,” Arruda told The Daily in French. “It is time for this to stop.”

Additionally, Serge Cadieux, secretary-general of the Fédération des travailleurs du Québec (FTQ), denounced the government’s “attack toward the union movement,” mentioning Bill C-377, which modifies tax law to impose heavy reporting obligations on unions, as an example of such policy.

In addition to the organized groups present, many non-affiliated protesters came to stand in solidarity with the various social movements voicing their requests. One supporter, when asked about his expectations for the night’s debate, expressed his desire to “see the words ‘climate change’ get mentioned.” Others were specifically offering their encouragement to the political parties involved.

Daniel Pelletier, a Green Party supporter from Ville-Marie, deplored the silencing of Green Party leader Elizabeth May in two previous debates, one organized by the Globe and Mail and Google Canada, and another by the Munk Debates. Speaking to the importance of climate change, Pelletier told The Daily, “We need to vote for the future of the planet.”