A night of representational comedy

Ladyfest Montreal carves out a space for women comics 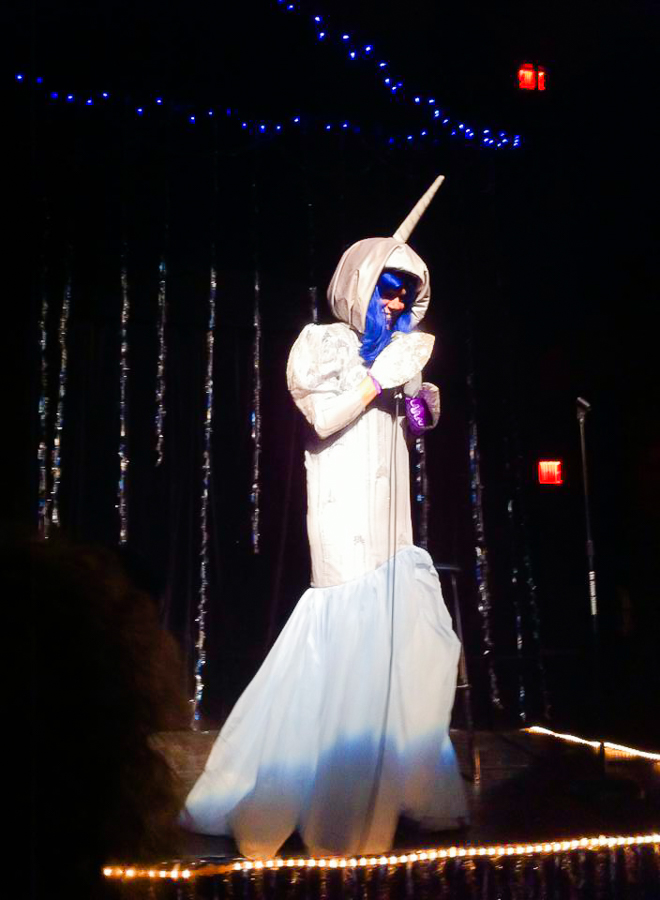 Labour Day weekend in Montreal brought the first ever Ladyfest Montreal Comedy Festival. Hosted by Women in Comedy Montreal, a collective that supports women in stand-up comedy, sketch comedy, and improv, the festival kicked off with a night of stand-up at Theatre Sainte Catherine.

In an interview with The Daily, festival co-organizer Katie Leggitt said that Ladyfest Montreal was intended to “recognize the people [who] are working hard on their comedy,” providing an alternate space to the Just For Laughs festival, which remains dominated by men. While women in comedy featured in the mainstream are often exclusively white and cis, Ladyfest provided a more accessible and anti-oppressive platform, resulting in a more diverse lineup.

The night was emceed by comedian Lise Vigneault dressed as a narwhal. What seemed like a random choice of costume was in fact quite purposeful. The physiology of the nearly extinct toothed whale served as a perfect analogy for women in comedy. Only 15 per cent of female narwhals grow the characteristic conical tusk, whereas almost all male narwhals do. Women in comedy represent about the same proportion, making Ladyfest Montreal a place for women to “grow their tooth and break through the ice,” Leggitt explained.

While women in comedy featured in the mainstream are often exclusively white and cis, Ladyfest provided a more accessible and anti-oppressive platform, resulting in a more diverse lineup.

The comedians poked fun at everything: sexuality, pop culture, religion, social inequality, romance and especially, the reality of being a comedian. No topic was taboo – women’s unequal representation in comedy was not left untouched during the show. Comedian Emma Wilkie noted how she was planning to start referring to men who do comedy as “men comics” in the same fashion that women are referred to as “lady comedians,” to illustrate the ridiculousness of emphasizing sex/gender.

Comedian Aisha Alfa was quick to criticize the hackneyed stereotypes about women of colour. This allowed her to define her own experiences as a women of colour in North America, putting her in control of her own comedic narrative before the audience could define her experiences for her and “put them in boxes,” as she put it.

Following in the same vein, comedian Eman quipped “Muslim women just have two things in life: marriage and waxing.” Jokes like this simultaneously highlighted the prejudice directed at Muslim women and Eman’s empowerment through how she chose to relate that prejudice to others.

[…]veiled under the comedy ran a serious discussion of human hardship.

Trans comedian Tranna Wintour used a similar approach to draw attention to the cissexism she experiences in society. Pointing out the straight line some draw from sexuality to gender, Wintour told a story of an amorous heterosexual cisgender man “[having] a full out identity crisis” about his sexual orientation after finding out that the comedian had a penis, completely ignoring the fact that Wintour had remained the same woman the whole time.

Her “modern-day Cinderella” bit brought laughs after she described her struggle with one-night stands. After a night out, Wintour is always hesitant to take someone back to hers. “Imagine if Prince Charming woke up to Cindy with a full-fledged beard!”

Ladyfest Montreal’s opening event kept its focus on women in comedy and received a lot of encouragement from the public, filling the night with laughter, a great atmosphere, and unforgettable jokes. It’s worth adding, however, that veiled under the comedy ran a serious discussion of human hardship.
— With files from Subhanya Sivajothy