Students use music as a less-confrontational disruption tactic 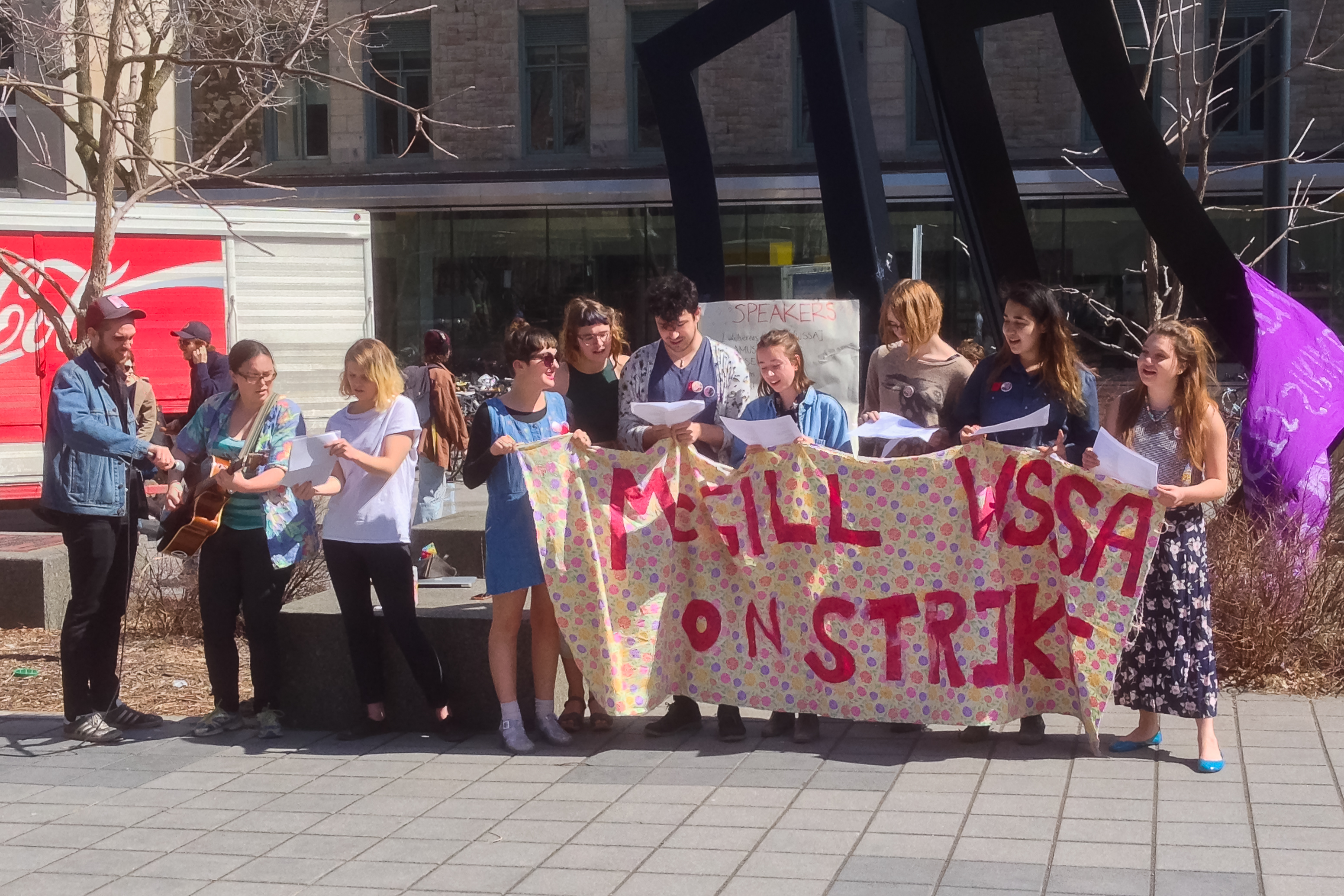 Women’s Studies and Sexual Diversity Studies Student Association (WSSA) members voted at a General Assembly on April 14 to end their strike against austerity measures, which began on April 1. During the two weeks of strike, the WSSA strike committee disrupted classes offered by the Institute for Gender, Sexuality, and Feminist Studies (IGSF), organized educational activities, and helped plan an anti-austerity community sit-in in front of the James Administration building on April 14.

“We’ve […] been hosting teach-ins and workshops during usual class time to give folks something else to go to, [as] a popular education tactic so that folks have the opportunity to come out and continue learning […] from one another, in a way that is much less hierarchical than class generally is,” explained Women’s Studies student and strike committee member Molly Swain.

Strike committee members employed a combination of soft pickets, hard pickets, and noise disruption to successfully cancel most classes scheduled during the two weeks. Although most students respected the strike mandate and did not attend class, tensions between picketers and strike-breaking students ran particularly high on certain occasions.

“We ask basically for the same respect from the folks who don’t necessarily agree with the strike.”

On one occasion, after a professor and around six students were prevented from accessing their classroom, the professor decided to move the class to an office instead of cancelling it. Picketers followed the students to the office and engaged in noise disruption, causing discomfort and fear among the students inside, according to reports.

“I was very scared, everyone in the room was very uncomfortable, very scared. […] They kept pounding on the door, they kept on making noise, and we couldn’t do anything,” said Blare Coughlin, one of the students who attended the class. “By enforcing the strike in such a loud, pressuring way […] it’s very alienating.”

Swain acknowledged that some of the tactics used contributed to tensions between students, but emphasized students’ responsibility to respect the strike mandate.

“Folks disagree on tactics; folks feel that if things get too confrontational, it can be uncomfortable for people,” said Swain. “We ask people to leave, and we always give them the opportunity to do so if they choose.”

“Should the strike get voted down, the strike committee is not going to […] keep picketing, out of respect for the decision of the collective body, and we ask basically for the same respect from the folks who don’t necessarily agree with the strike,” added Swain.

In an attempt to ease tensions and lighten the mood, striking students formed a cover band called Whereas, Women in order to enforce classroom disruptions by means of musical performance.

“We thought we might try a more fun and inclusive tactic,” Women’s Studies student Kelly Schieder told The Daily at the band’s debut performance, which took place in the IGSF building on the morning of April 10.

“It’s a way for noise disruption to happen and for us to fulfill our mandate in ways that are somewhat less confrontational,” added Swain.

The band, whose repertoire ranges from 90s hits to classic protest songs, also staged a show on April 13 to celebrate the last scheduled class of the year in the department. The class was cancelled with no issues, and the festive atmosphere elicited a positive response from the students who had come to attend the class.

“They took a different approach, and I’m really thankful for that,” said Coughlin.

The strike committee attempted to coordinate the enforcement of the WSSA strike mandate with IGSF faculty, as the WSSA had done during the 2012 student strikes. However, despite their stated opposition to austerity measures, the professors were largely unaccommodating this time around, with some indicating that they would call security on picketing students.

“We went into this having communicated with the IGSF […] beforehand, and their response to us was very similar to what we received in 2012, which was, basically, ‘We’ll do the best we can to support you, but we also need to make sure the profs are getting the support they need,’” explained Swain, who was in her first year at McGill during the 2012 student strikes.

“[In 2012], professors said that if we put up picket lines, they wouldn’t cross them, so we effectively cancelled class fairly easily. […] The reception from the professors [this time] was not as accommodating at all to the strike.”

In an interview with The Daily, IGSF Director Carrie Rentschler expressed opposition to austerity measures, but argued that the precarious nature of the IGSF instructors’ position made it difficult for them to support the striking students.

“I am anti-austerity. We have seen here at McGill a round of budget cuts in the millions […] – they are hampering our ability to provide the kinds of education that we want to provide here at the institute,” said Rentschler.

“None of us have the protection of a union. Our instructors work on contract basis, which means their positions are precarious – not because we make them precarious, but they are by nature precarious. So those instructors don’t have the kind of protections you would have if you were a union person going on strike.”

“This has given folks a little bit of taste of what this can look like, and they can take that and make it their own in the fall.”

On April 4, the strike committee published an open letter expressing its disappointment with the IGSF’s response to the WSSA strike.

“We understand that the IGSF is receiving threats that their professors […] could lose their jobs or not be paid if they attempt to accommodate or support striking students,” the letter reads.

“What we do not understand is why they have chosen to accept these conditions wholesale and have proceeded to repress our resistance to these same forces instead of working with us to challenge those above them in the university hierarchy, as we are putting ourselves at risk to do.”

With the strike now over, the strike committee will continue working with the IGSF to attempt to establish assessment procedures that do not penalize students who were involved in the strike.

“We’re going to be meeting with them to ensure that everybody in this situation comes out of it feeling like there’s no remaining hostility, and that students who have been involved in the strike feel like they’re protected moving forward in their degrees – and the profs also feel comfortable continuing to teach folks,” said Swain.

Both Coughlin and Swain also said that they look forward to the continuing mobilization in the fall.

“In the fall, we’ll be able to mobilize a lot more, because people won’t be scared about finals […] hanging over their heads – so I’m actually kind of hopeful for fall,” said Coughlin.

—With files from Marina Cupido