Tens of thousands against austerity on the streets of Montreal

130,000 students on strike as protest continues late into the night 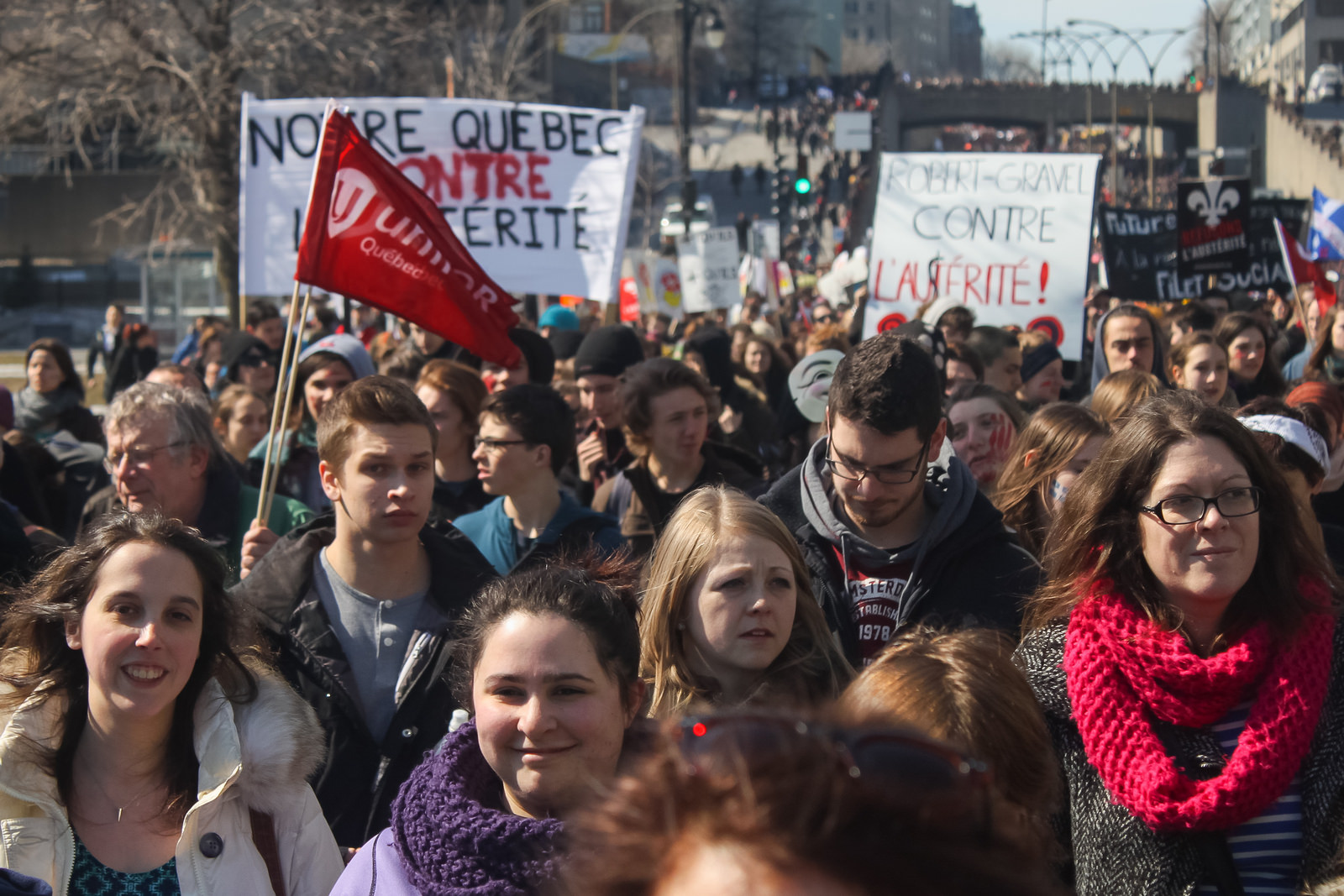 Over 30,000 people gathered at Square Victoria on April 2 to demonstrate against the Quebec government’s austerity measures, totalling over $7 billion in cuts to healthcare, education, and other public services. Over 130,000 university and CEGEP students – including McGill’s Faculty of Law and three departmental associations – were on strike for the day of the demonstration, organized by the Association pour une solidarité syndicale étudiante (ASSÉ).

Gathering at Square Victoria at 1 p.m., protesters marched in the streets of downtown Montreal – including Sherbrooke, Robert-Bourassa (formerly University), and St. Denis – for over two hours, before finally arriving to Place Émilie-Gamelin, near the Berri-UQAM metro station, around 3:30 p.m.. The demonstrators did not give the itinerary of their march to the police, making it illegal under municipal bylaw P-6, and many Service de police de la Ville de Montréal (SPVM) were present throughout.

Protesters expressed their discontent with the government’s austerity measures with picket signs and banners. Marching in the streets, they chanted slogans in French such as “Un peuple uni jamais ne sera vaincu!” (“The people united will never be defeated!”) and “À qui la rue? À nous la rue!” (“Who owns the street? We own the street!”).

Connor Spencer, a U1 German Studies and History student at McGill, told The Daily that she attended the demonstration because of the far-reaching effects of austerity. “All of the things I feel very strongly about, specifically public services, public benefits, and the things that the government should be supporting, are being attacked in order to conquer the provincial debt,” she said.

She continued, “Instead of hitting the big people, they’re hitting the little people, just people further down, so I’m trying to protest that.”

Although the demonstration consisted mostly of students, unions and community organizations were also represented at the protest. A contingent was also present representing the provincial political party Québec solidaire.

After the demonstration officially ended, some demonstrators remained on the streets until late into the evening; a second night demonstration had been planned for 8 p.m.. At around 6 p.m., protesters and police clashed near Berri-UQAM, at which point police ordered protesters to disperse and began spraying the crowd with tear gas.

Also in attendance were representatives of the Immigrant Workers Centre and the Asian Women Coalition Ending Prostitution (AWCEP), a group that fights human trafficking and the sexual exploitation of Asian bodies.

Mah added, “Austerity measures and the cuts to health services, and most recently, Bill 20, will definitely negatively affect access to [healthcare] for women, and disproportionately for women of colour.”

Florence Tétreault, a Literature and Art History student at Université du Québec à Montréal (UQAM), noted the importance of the strike in communicating student views to the government. “That’s the only thing we can do, I think. I don’t know how I could be active in protest in another way,” Tétreault told The Daily.

Speaking to McGill students’ participation in the demonstration, Spencer said that she saw it as a necessary “symbol of solidarity.”

“It shows that we are aware, we don’t live in this ‘anglo bubble,’ we know what’s going in Quebec, we know that it affects us, and that we care and we’re showing solidarity with [the] province even though we come from all over.”