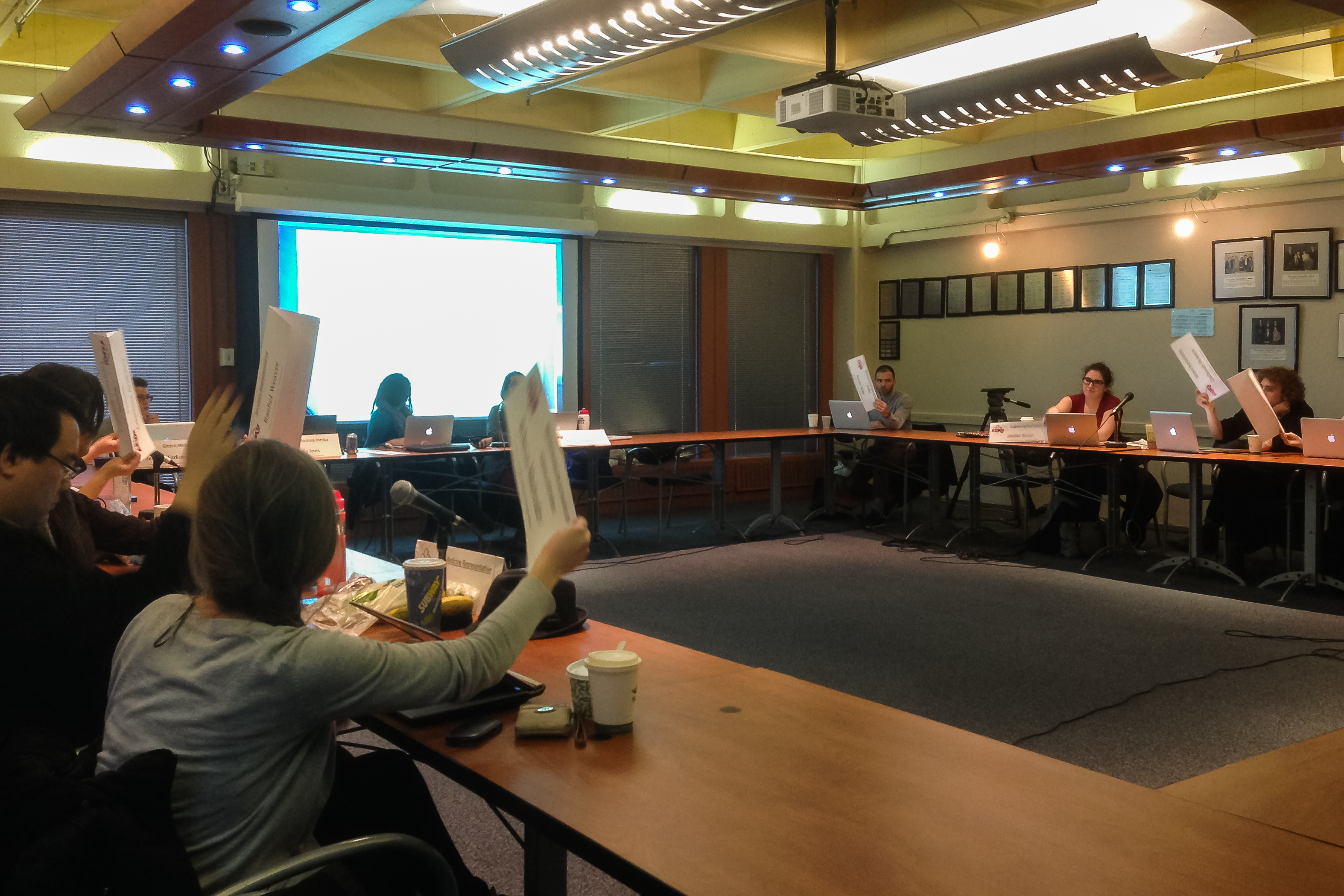 On April 9, the Students’ Society of McGill University (SSMU) Legislative Council convened for its final meeting of the year, which lasted eight hours, to debate proposed policies on for SSMU regarding climate change and harmful military research. The Climate Change Policy was ultimately referred to a committee for reworking, and the Policy for a Campus Free from Harmful Military Technology passed only partially.

Councillors also passed motions to stand in solidarity with teaching assistants in their ongoing negotiations with the administration, and to increase SSMU’s support of the Peer Support Network (PSN).

At this year’s Fall General Assembly (GA), students voted in favour of a motion calling on SSMU to “renew its stance of opposition to the development of harmful military technology on campus”; a policy to this effect was brought to Council for approval.

The document, moved by VP University Affairs Claire Stewart-Kanigan, VP External Amina Moustaqim-Barrette, and Arts Representative Patrick Dunbar-Lavoie, noted that SSMU’s previous policy on the issue had expired in 2013, and that “McGill has remained non-transparent about the extent and nature of military funded research on campus.”

The proposed policy in its original form would have mandated SSMU to oppose the development of harmful military technology on campus, support campaigns with this goal, promote alternative student research opportunities, and lobby the administration for more transparency in the potential applications of research contracts.

It also called on the VP University Affairs to advocate for the delineation of “social responsibility” and of the criteria to be used to weigh the “potential benefits against the possibility of harmful applications’ to evaluate the permissibility of research contracts.”

The policy sparked a lengthy, and at times heated, debate among councillors.

Science Representative and incoming VP Finance and Operations Zacheriah Houston expressed concern over the relatively small proportion of consulted McGill students who had expressed support for such a stance. Out of 200 students polled on the subject, only 27 per cent had responded favourably.

“I think there was a lot of backlash,” she said, speculating that much of students’ opposition to the policy was based on opposition to the activist group Demilitarize McGill. However, she said, most respondents had expressed a desire for greater transparency with regard to the technologies developed at McGill and their possible applications.

In response to Rourke’s concerns, Stewart-Kanigan said that Demilitarize McGill had not been consulted in the drafting of this policy, which, contrary to the concerns of some students, would not offer the controversial group unlimited support from SSMU.

Engineering Representative Anikke Rioux told Council that many students had expressed skepticism about the policy, arguing that many crucial innovations – such as nuclear technology and many advances in aviation – have their origins in military research. She also noted that these contracts bring money to the university at a time when provincial cuts to education are a major concern.

Stewart-Kanigan, meanwhile, defended the policy. “The term [‘harmful’ expresses] that we’d rather not be developing bombs, thermobaric explosives, missiles – those […] very specific things that are designed to inflict harm onto somebody else’s body.”

Medicine Senator David Benrimoh concurred, arguing that “it’s not necessarily about the technology itself, it’s about the provision of the contract.” Clearly, he said, SSMU’s policy would not end the development of such technologies altogether, nor would it bring Canada’s military to its knees – “but that’s not the point.”

“As a university,” said Benrimoh, “we should not be encouraging the military to think of us as a place where they can sink their research dollars for technologies that are [intended for combat].”

After nearly an hour of debate, a motion was brought forward to divide the question. The first ‘resolved’ clause, stating SSMU’s opposition to the development of harmful military technology on campus, passed by a close margin. The final three clauses passed easily, mandating SSMU to lobby in favour of increased transparency on this issue.

The portions requiring SSMU to support student initiatives against harmful technologies and to promote alternative research opportunities, however, were defeated.

The most controversial clauses were voted on by roll call.

Following extensive consultation and research, Moustaqim-Barrette brought forward a climate policy for SSMU, along with Stewart-Kanigan and Dunbar-Lavoie, in accordance with another motion passed at the Fall 2014 GA.

The proposal outlined the stances SSMU would take with respect to different climate issues (the Society would, for example, be mandated to oppose the extraction of fossil fuels), the prioritization of funding for broader climate justice projects, and the diverse tactics that would be used in pursuit of climate justice.

According to Moustaqim-Barrette, the policy was developed through months of consultation with experienced activists and specialists in a variety of domains pertaining to climate justice advocacy.

The Engineering Representatives themselves, Rioux and Scott Conrad, expressed vehement opposition to the policy as it stood, arguing instead for a reworking of the proposal over the summer. Rourke and Houston agreed, taking the position that, while elements of the policy were valuable, it should appeal to students across all faculties.

Medicine Representative Joshua Chin, along with a number of other councillors, objected to the fact that, while labelled a “climate change” policy, much of the document dealt with climate justice. “[At the Fall GA] we voted on a motion regarding climate change, and in that motion there was not one single mention of climate justice. How come this policy, which comes from that GA motion, mentions climate change only [briefly], whereas climate justice is [referred to] throughout the rest of the motion,” said Chin.

Stewart-Kanigan defended the relevance of climate justice. “The elements of climate justice that are outlined in this policy are very specific to allying ourselves with Indigenous communities who face extraction on their territories without their consent, [or] who face oil spills in their area.”

She continued, “If you […] want to take the ‘justice’ part out of it, you’re really [saying, for example, that] it would be a bad idea to have a fundraiser for an Indigenous community who’s getting a mine put on their territory that they don’t want. […] These are people you’re talking about.”

After much discussion, Houston moved to refer the proposal to a committee, which would revise the motion to make it appealing to a broader base of students before bringing it back to Council in the fall. The committee would consist of Moustaqim-Barrette and any other interested parties, and would be formed as soon as possible.

This passed by a wide margin.