Building these spaces is a process, not empty rhetoric 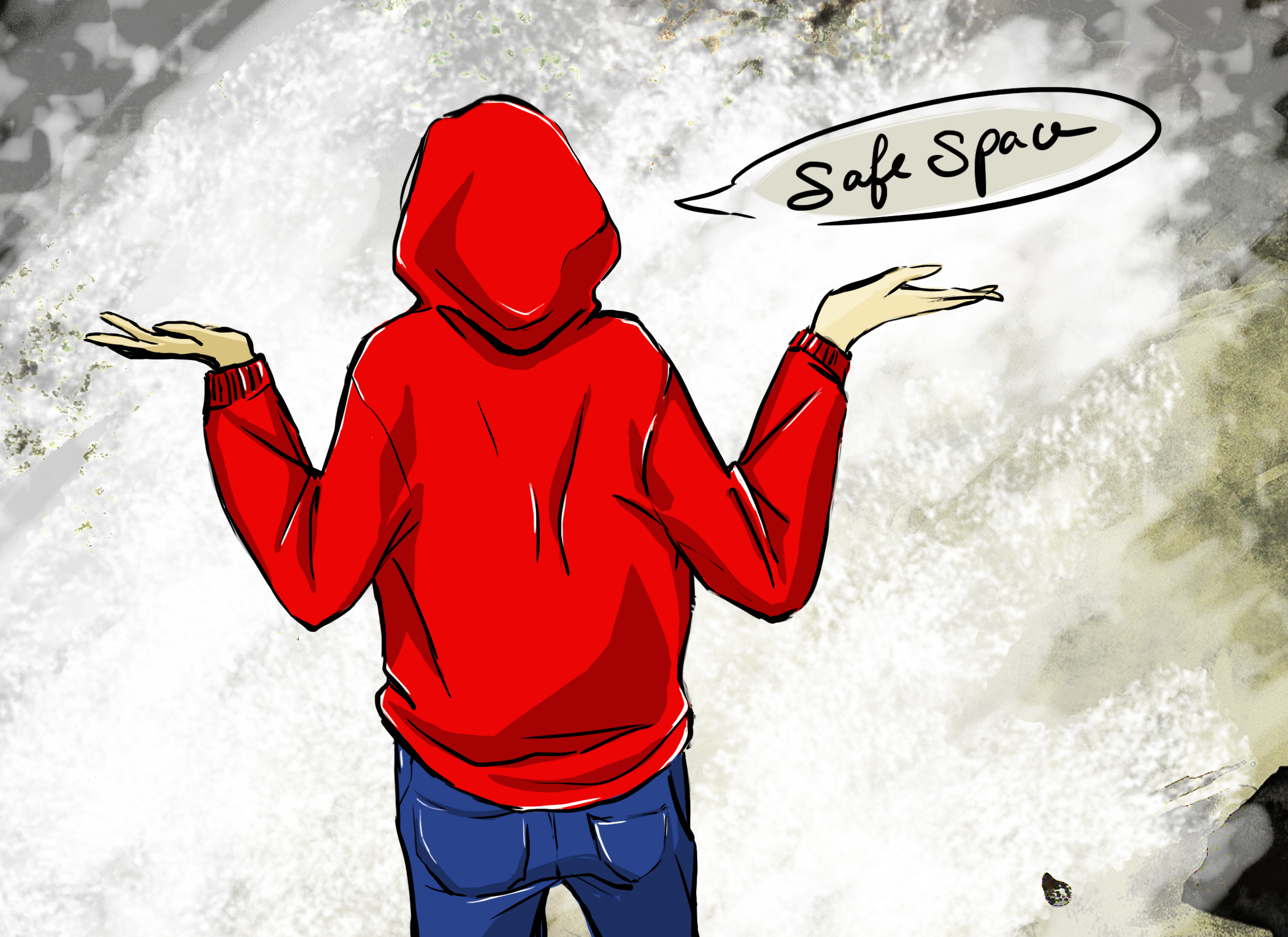 Out of all the phrases thrown around in day-to-day conversation, in campus media, and elsewhere, ‘safe space’ seems to be the one that riles people up the most. We’ve seen it this year again and again, from the outrage against Queer McGill’s closed meeting for people of colour, to the backlash against the proposal for women-only gym hours. It was even loosely touched on by a widely-read feature in The Daily earlier this year, titled “Everything is problematic” (November 24, Features, page 21). But what happens when so-called safe(r) space is actually just lip service for the sake of patting yourself on the back? Groups and individuals, especially in self-described ‘radical’ or ‘anti-oppressive’ spaces – and I include The Daily in this – need to stop co-opting a powerful tool for fighting against oppression, and turning it into empty words and rhetoric.

As with most terms that deal with sensitive topics, there is no agreed-upon definition of safe(r) space. The Students’ Society of McGill University (SSMU) Equity Policy sums up this concept as recognizing and proactively challenging the systemic disadvantage and discrimination from which certain groups benefit. Essentially, safe(r) space is for those who face marginalization and oppression – such as racism, sexism, transphobia, ableism, and so on – based on assigned or asserted identities, which often intersect and compound. It is a place where privilege, or the unearned relative benefit that some groups and individuals enjoy as a result of discrimination or oppression of marginalized groups, must be recognized and dismantled. Safe(r) space is not merely an adjective, a designation, or a static characterization: it is an active process that requires constant vigilance and unlearning of problematic behaviours and thoughts. As my friend and former colleague Hannah Besseau wrote in “The case for safe(r) space” (November 24, Commentary, page 18), “Experiencing safe[r] space is an individualized experience [… it] is – more than anything – a goal.”

Groups and individuals, especially in self-described ‘radical’ or ‘anti-oppressive’ spaces – and I include The Daily in this – need to stop co-opting a powerful tool for fighting against oppression, and turning it into empty words and rhetoric.

Unfortunately, this very real and valuable goal is often used simply as empty rhetoric – whether well-intentioned or not. Too often have I seen people like myself – white, educated, middle-class, cis, and privileged in other ways – use the term safe(r) space (or safe space) as a kind of declaration that they are morally superior to and smarter than everyone else. It’s kind of like allyship, the process of standing in solidarity with an oppressed group and challenging one’s own unearned privilege. People run around labelling themselves proudly as allies, or as proponents of safe(r) space, and then do nothing to actually back up their words. When the time comes for action – to call out privilege, to stop violence – these same people are suddenly not there. Like allyship, safe(r) space is twisted into a label or a belief system that is used by people to prove how ‘different’ they are from the rest of the privileged group in question. Or, more concerningly, very privileged people misunderstand safe(r) space to mean a comfortable space. If you have privilege, you will probably be uncomfortable in these spaces, because they fundamentally challenge the very systems of institutional oppression in which you are complicit. And often, if you have privilege that others in the space do not, your mere presence will create an unsafe space – sometimes, part of creating a safe(r) space is removing yourself entirely.

Obviously, I can’t speak to every case. There are many groups and people at McGill who are dedicated to creating safe(r) spaces for themselves and people they interact with, who understand that this is a difficult and constant process that will never be totally ‘right.’ But these are not the people or the groups that I am addressing. Instead, this is directed toward those who hold a significant amount of privilege in society, and pay only lip service to the concept of safe(r) space. Even good intentions can’t erase how harmful this can be. Often, people who adhere to this concept, or respect spaces that proudly promote this concept, can feel better about themselves, as if they are above the kind of violence enacted by systems of oppression. Let me be the first to tell you: you’re not. We’re not. We are complicit in these systems of oppression, and merely agreeing that safe(r) space is necessary is not enough. We have grown up in a society governed by oppressive structures and institutions, and have been socialized into them. You can’t undo your own socialization in one night, or even in one year. And no, saying out loud to a room, ‘I recognize that I am complicit in these systems’ does not actually make you any less complicit in them, nor does it stop such violence. This is only a small part of a lifetime process of constantly fucking up and re-educating yourself, over and over again.

Like allyship, safe(r) space is twisted into a label or a belief system that is used by people to prove how ‘different’ they are from the rest of the privileged group in question.

Nor is it helpful to focus solely on the micro: as an editor and a writer, I subscribe completely to the idea that words are intensely powerful, and that we need to change our language to reflect our ideals and values. But I also believe that people can get distracted by issues of language and fail to look at their own actions, and the more insidious actions of the people around them. The Daily does not escape this criticism, and as an editor for the last two years, I am fully complicit in this. It’s all well and good that we can point to words on the page and say ‘that’s ableist,’ but if we have group meetings in an inaccessible building, are we actually doing much? I don’t mean to say that changing language should be left behind in the dust, but rather that it needs to be paired with the active acknowledgement and condemnation of actions and systems. Otherwise, the people for whom you are trying to create a safe(r) space will realize very quickly that it’s all about assuaging your own guilt and about looking good in front of everybody – it’s about proudly announcing that you are anti-oppressive, rather than actually tearing down oppressive structures. The betrayal that comes with realizing a supposed safe(r) space is actually just an empty label is extremely harmful; people can begin to think that the microaggressions they experience or the very real ostracization they feel is all in their head.

Most important for creating a real safe(r) space as a person with privilege is challenging oppression from fellow privileged people. For example, I, as a white person, have a responsibility to call out instances of racism from fellow white people. Instead of simply saying, ‘that’s not safe(r) space,’ and subsuming specific instances of violence under a blanket term, those with privilege should call the problem what it is. Otherwise, dialogue is shut down, and all that is proffered is guilt, rather than an opportunity for change and re-education. I want to emphasize when I talk about calling people out and giving them resources, I speak specifically to people with privilege. The burden of education should never fall to those who are already marginalized.

Despite all these criticisms, safe(r) space is a process and a goal that I strongly believe in. The argument that the outside world isn’t ‘safe’ and so safe(r) space is a waste of time is truly a crock of shit – safe(r) space is a deliberate creation, where groups and individuals strive to combat these systems of oppression. At its most basic, the goal of safe(r) space is to offer a refuge from the storm of the so-called ‘real world’; it is meant to give people a place where they can feel comfortable, have their opinions validated, and not have to face (as many) disempowering and harmful incidents. University is probably the place where we, as students, have the most agency to build our own spaces and create our own rules. And to those who say that safe(r) space is too complicated, that we’ll never get it right: you’re absolutely correct, we’ll never get it ‘right,’ because it isn’t possible to completely leave behind systems of oppression that have governed our lives for centuries. But giving up on something because it’s difficult isn’t the answer. The most important things in life are complex and require a lot of effort, not just words slapped onto pages or uttered without a second thought – and building safe(r) space is one of them.

Author’s note: I am indebted to all the people who have talked about safe(r) space with me, and to all the resources offered by anti-oppression activists and people who dedicate their lives to making this world a bit less violent every day. My opinions are constantly shaped and informed by the work and the experiences of other people, and I can by no means take credit for them.

Dana Wray is the Coordinating editor at The Daily, but the opinions expressed here are her own. To contact her, please email danawr4@gmail.com.