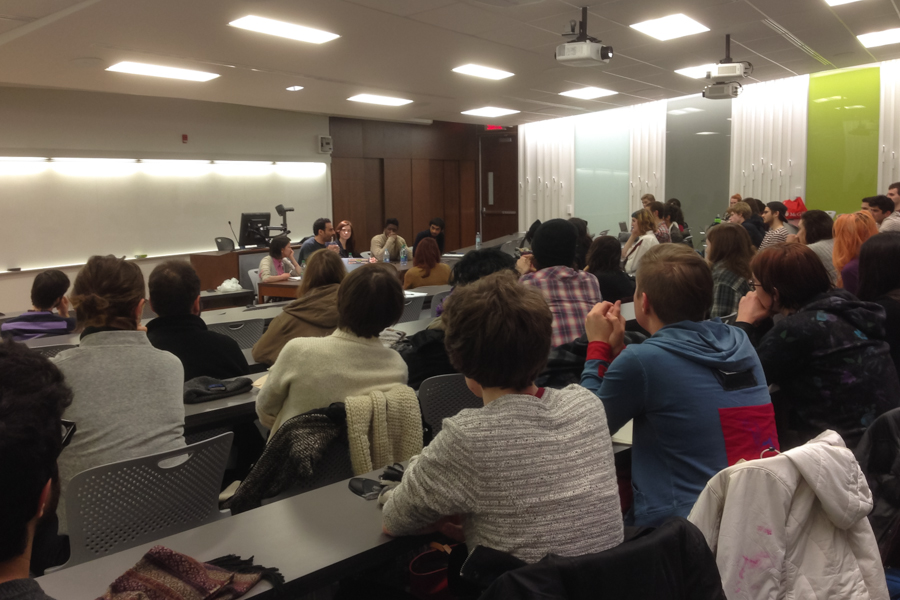 Four activists from widely varying backgrounds came together to share their experiences and offer advice on methods of resistance during a panel discussion called “N(oh), Canada: Intersectional Perspectives on Canadian State Violence,” hosted by Demilitarize McGill. The event, held on February 25, attracted a diverse group of roughly forty students and sparked a lively conversation that lasted over an hour.

“We wanted to create a platform where different voices could challenge the dominant narrative we hear about the state,” explained a member of Demilitarize McGill in an email to The Daily. “This narrative – that the state exists to protect us – directly contradicts the lived experiences of many communities.”

Fuamba, Montreal’s Youth Ambassador to the Canadian Council for Refugees and MC and songwriter of Congolese origin, offered insight into the problematic impact of Canada’s immigration laws. He highlighted Bill C-31, which, since being passed in December 2012, has made it significantly more difficult to receive refugee protection in Canada.

According to Fuamba, prospective immigrants are liable to face deportation should they be found guilty of any criminal offence during their application process, however minor. “[Bill C-31] affects a lot of people,” he explained, adding that the criteria according to which someone could be deported are “really subjective.”

“Every night, they’d come directly to me and pepper spray me in the eyes while filming.”

Nikiforuk, an activist and writer who specializes in gender issues and Canadian sex work legislation, also spoke at the panel. She explained the negative ramifications of Bill C-36, passed in December 2014, which criminalizes the act of buying, advertising, or profiting from the sale of sexual services.

By driving sex work underground, she said, the bill puts those who participate in the industry – a community already vulnerable to many forms of violence – even more at risk. “I don’t think [it reflects] Canadian values, and I think instead it [plays] on […] sex trafficking fears,” said Nikiforuk. “The bill [is called] ‘The Exploited Persons Act,’ conflating sex workers with trafficked persons, which is very dubious.”

Marouf, a multimedia consultant and producer who launched and hosted CKUT’s Palestinian community radio program “Under the Olive Tree,” and has worked with Indigenous and Palestinian solidarity activists across the country, spoke to the audience about freedom of speech in Canada.

Marouf also shared his experience with police brutality during the 2012 student strike. Marouf organized a live broadcast of the strike from the streets of Montreal, facing repeated assaults from riot police. “I was targeted directly by the cops,” he said.

“Every night, they’d come directly to me and pepper spray me in the eyes while filming,” he said. “They broke my ribs one night […] and that was in front of all the viewers, the Canadian public, the judicial system. […] The truth is, there is no freedom of speech.”

Saunders, the fourth panelist, is an Inuk blogger and activist. Last year, while Saunders researched Canada’s history of violence against Indigenous women, her sister, Loretta Saunders, was murdered. During the panel, Saunders stressed the need for more aggressive attitudes toward domestic and gendered violence from politicians, law enforcement officers, and the Canadian justice system.

Saunders also decried the dearth of infrastructure and basic necessities available to Indigenous communities in Labrador.

“With a lot of Native communities who have suffered the intergenerational impact [of colonial occupation], they don’t have the resources, or the funding, [or] therapists. They don’t have even […] basic medical care,” said Saunders. “How can you make sure that you’re not psychologically defeated if you’re not given the tools […] or the language to persevere?”

Despite their diverse backgrounds and areas of experience, all four panelists stressed the importance of intersectionality and mutual support between marginalized groups.

In a message to The Daily, one audience member, U0 Arts student Sean Nossek, expressed his appreciation of the discussion.

“I think what this panel did well was highlight the intersectional nature of state violence,” Nossek said.

“Whether you’re someone who’s struggling against racial discrimination and police harassment, the destruction of Indigenous territory, violence against women, or any of the manifold ways in which the state tries to hurt us, our struggles do not exist in isolation and we can only fight them through solidarity and coordinated action,” he said. “Demilitarize McGill knows all too intimately how connected we are to state violence as university students, and I don’t think any group on campus could have organized this event better.”