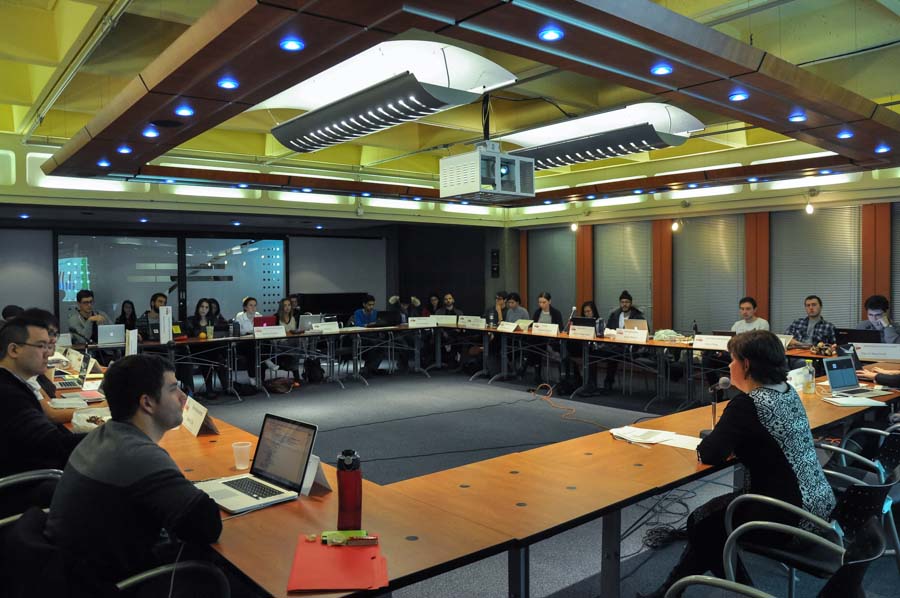 Every time that the Students’ Society of McGill University (SSMU) ends up on my Facebook feed, there seems to be another scandal or controversy concerning the elusive group that runs our student government and their ‘esoteric leftist liberal agenda.’ This just means that students on this campus are focusing on all the wrong issues. Students’ reactions seem to be stuck within the binary of ‘not caring’ and ‘complaining.’ With that sort of attitude, we can never make SSMU into the ally we need.

Like many, I’m not an active member of the SSMU community – aside from voting, I don’t take part in student governance, and I have no real stake in painting a positive or negative picture of SSMU. But I covered SSMU’s Legislative Council for The Daily for three semesters, sitting in the back of the Lev Bukhman room and hearing firsthand the conversations that later get twisted and simplified in Facebook statuses and comments on articles. With that in mind, I have a few words to say about the state of student politics at McGill.

One of the most commonly used words associated with SSMU over the past few weeks was ‘esoteric,’ especially with regard to its activism. The irony of calling SSMU ‘esoteric’ is that every time there is an online referendum to increase or create fees for ‘esoteric’ activist groups or services, they pass by overwhelming majorities. QPIRG-McGill’s recent fee increase passed with 62.9 per cent of the vote, and last year Midnight Kitchen got a huge fee increase (from $2.25 up to $3.28), with 72.5 per cent in favour. This past fall, motions to support action on climate change, solidarity against austerity, and a campus free from harmful military technology all passed by 80.79 per cent, 78.7 per cent, and 55 per cent, respectively. With such numbers, it’s hard to believe that these issues are supported by only a small minority. So if these aren’t the ‘esoteric’ issues that critics complain about, what are?

The irony of calling SSMU ‘esoteric’ is that every time there is an online referendum to increase or create fees for ‘esoteric’ activist groups or services, they pass by overwhelming majorities.

Someone might (and rightfully should) point out that most of these referendums only had between 2,000 to 4,000 of more than 20,000 undergraduate students actually vote in them. My response: why get mad at the people who show up, rather than those who don’t? Instead of getting upset that people who don’t share your opinion are more likely to vote, we should be angry with the students who are too apathetic to open an email and spend a few minutes contributing to our community.

Another accusation frequently thrown at SSMU is the insider-group conspiracy, which became much more popular with last year’s invalidation of Tariq Khan’s presidential win. Courtney Ayukawa, allegedly a member of this SSMU in-group, became president instead. This year, another member of the in-group, Kareem Ibrahim, won the presidential election over outsider Alexei Simakov. Similarly, VP Internal Lola Baraldi narrowly won over outsider Johanna Nikoletos. Elections aside, however, there is an inherent bias among SSMU representatives that favours the political opinions of this in-group.

This SSMU Council is completely dominated by a group of like-minded students who speak three times as often as the rest of the Council, are movers on practically all the motions, and often have the majority vote. Either Ibrahim or Baraldi were movers on 14 of 36 motions so far this year; the majority of the other motions were put forward by the executive team.
But this bias doesn’t exist because of the in-group of councillors and executives overpowering the other representatives. It’s because your representatives don’t speak up, and more importantly, don’t vote. In the motion to ban “Blurred Lines” from the Shatner building, there were seven votes in favour, eight against, and eleven abstentions. In a motion to support AGSEM: McGill’s Teaching Union’s attempt to unionize undergraduate teaching assistants, nine of 30 councillors abstained. While there are definitely appropriate times to abstain from a vote, e.g. in cases of personal or professional conflicts of interest, these councillors and senators are abstaining from important votes that, as representatives, they should be taking a stance on.

This SSMU Council is completely dominated by a group of like-minded students who speak three times as often as the rest of the Council, are movers on practically all the motions, and often have the majority vote.

The bias in SSMU Council exists precisely because of these apathetic councillors, who do not speak up and properly represent their constituents. Ibrahim and Baraldi represent a body of students who deserve to have their voices heard – just like anyone else. Except, unlike many on Council, Ibrahim and Baraldi actualize their representative power. Without enough voices or votes to argue against them, almost every motion they bring to council gets passed. Even if you agree with their opinions and actions, this one-sided debate isn’t fair to the rest of the campus, whose input gets overlooked.

Blaming the vocal minority for the motions that get passed at Council will not ‘fix’ SSMU. Instead, we have to stop letting a minority group have the power of a majority. If you are not okay with a motion that is being discussed, tell that to your councillors. Get mad at them when they abstain from a vote. Remind them that they should be informed on the situation, and that they should amend the motion in a way that represents your opinions. The least they can do is be prepared to pick a side.

I don’t want to paint a horribly negative picture of all the SSMU representatives who aren’t in the in-group, just as much as I don’t want to put Ibrahim and Baraldi on a pedestal they don’t deserve. Ibrahim and Baraldi, along with the rest of the new executive team, are now representing all of us. If you find them unfairly pushing personal or minority group biases at SSMU, it’s within your rights to call them out. But it’s not up to you to say that the rights of the minority should be completely ignored. Think you’re representative of a larger group of disgruntled people? Organize yourselves and bring your own motion to SSMU or your representative. They can’t and won’t shut you down.

If you are not okay with a motion that is being discussed, tell that to your councillors. Get mad at them when they abstain from a vote.

By staying within binary of ‘not caring’ and ‘complaining,’ we’re letting the vocal minority take control of every situation, because they take the initiative to do so. Complaining and calling SSMU names isn’t going to make them change their ways. Tensions will run high in the upcoming academic year as austerity measures become reality and more students begin to strike. SSMU will be the most powerful voice McGill students will have, and it’s up to us to speak out and let them know how we want to be represented.

In light of the recent circus that was the SSMU executive elections, I have to say that I respect Simakov’s campaign, because he wanted to bring students outside of the SSMU sphere into the debate. But now, it’s time to stop slandering SSMU and to start actualizing its potential. SSMU doesn’t only function during times of controversy and scandalous elections; it functions all year round as an institution you can use for your own benefit to create change on campus. At the very least, you could bother to vote.

No matter what you think of it, SSMU is an institution run by the students and for the students. Every move that SSMU makes, every scandal and flubbed decision, comes down to the students, both the ones who were there and the ones who didn’t show up. Let’s all just take a step back from our reactions on Facebook, and instead take a positive, active step toward making SSMU our ally instead of our enemy.

Lauria Galbraith is a U1 Classical and Religious Studies student. To reach her, please email lauria.joan@gmail.com.