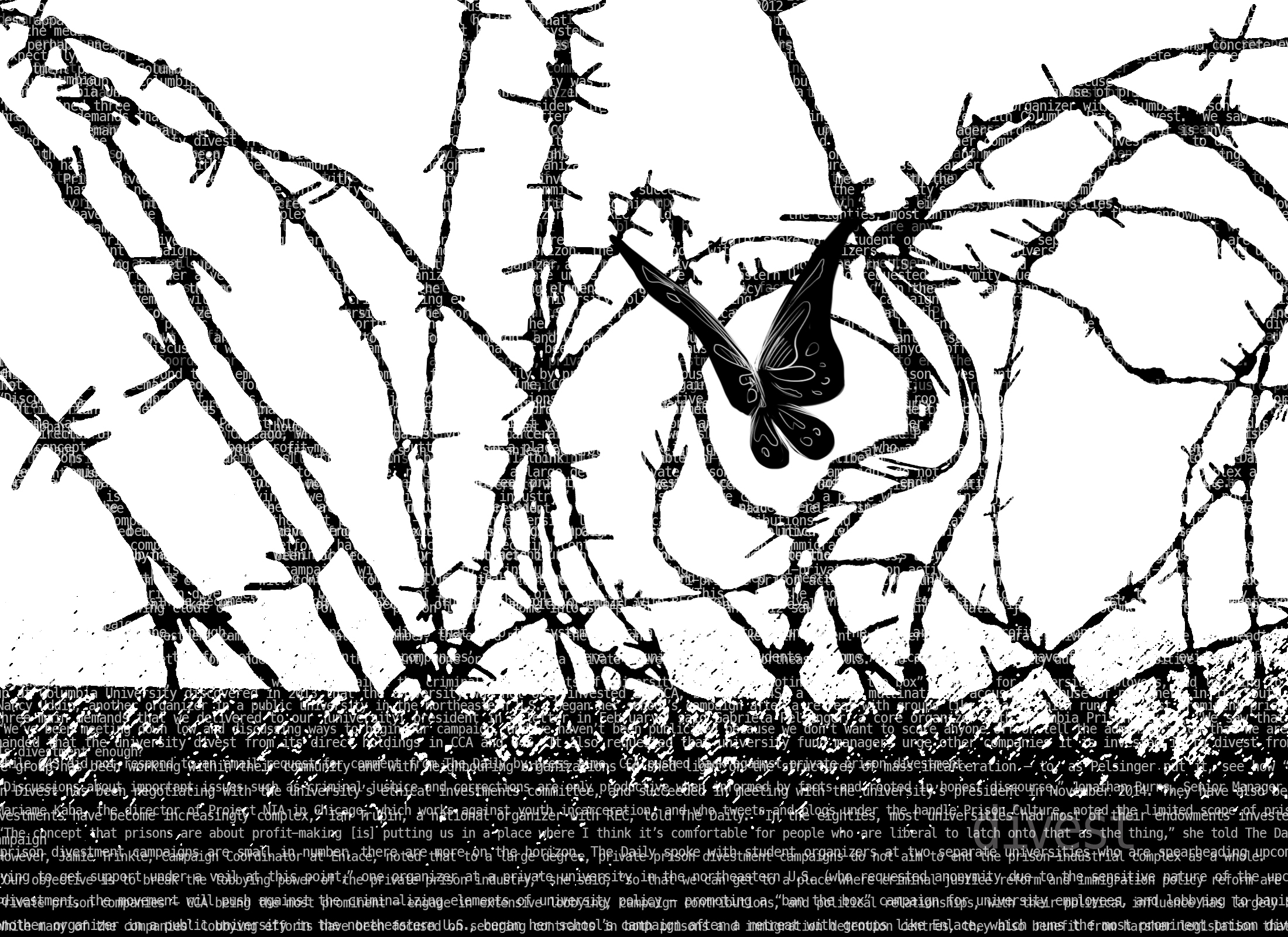 Scroll down for the audio version of this story.

Only a few years ago did the growing clout of the U.S.’s for-profit prison industry come into sharp relief. 2011 and 2012 saw a flurry of investigative journalism documenting the industry’s political influence, combined with its steadily increasing prison expansion over the course of several decades.

Less apparent in the media landscape, though, are the financial holdings that keep the system of private incarceration running. The two largest for-profit prison companies in the U.S. – the Corrections Corporation of America (CCA) and the GEO Group – are publicly traded. Investors range from cities, to investment firms, to mainstream banking institutions and hedge funds.

And perhaps unexpectedly, mixed into the fray of investors in these companies’ portfolios, there are universities. Students at some American universities have found concrete evidence of their schools’ investments in the prison industry, and there are certainly others where the investment portfolios have yet to be revealed.

A student group at Columbia University discovered in 2013 that the university was not only invested in CCA, but also G4S, a British multinational accused of abuse of prisoners in its South African prisons. The group’s information was limited: they knew that in June 2013, Columbia held 230,432 shares in CCA, worth a market value of roughly $8 million, but they only have access to 10 per cent of the university’s investment portfolio.

“We outlined three main demands that we delivered to our [university] president in a letter in February,” said Gabriela Pelsinger, a core organizer with Columbia Prison Divest. “We saw that they had these investments, and we didn’t want our tuition, our school – our community – profiting off of what we see as profit from putting bodies in cages.”

Since then, the group has been working within their community and with neighbouring organizations to shed light on the structures of mass incarceration – to, as Pelsinger put it, see how “these structures of incarceration and criminalization and profit work together and how we fit into it. And how us being kind of aloof college students at this university kind of played into these larger structures.”

“Our objective is to break the lobbying power of the private prison industry, so that we can get to a place where criminal justice reform and immigration policy reform are possible in a way that will allow people to live with dignity.”

“University investments have become increasingly complex,” Ian Trupin, a national organizer with REC, told The Daily. “In the eighties, most universities had most of their endowments invested directly in the stock market – so it was relatively easy to see what universities were invested in. […] Universities [now] invest in vehicles like hedge funds, commingled funds, whereby they’re all about maximizing returns, but there’s no emphasis whatsoever on transparency or accountability.”

While current prison divestment campaigns are small in number, there are more on the horizon. The Daily spoke with student organizers at two separate universities who are spearheading upcoming campaigns. The organizers spoke to the difficulty of obtaining information on university investments, both direct and indirect, and the importance of building a network of support before going public.

“We’ve been trying to get support under a veil at this point,” one organizer at a private university in the northeastern U.S. (who requested anonymity due to the sensitive nature of the upcoming campaign) said. This support has come from certain deans, administrative units tasked with supporting diversity and students of colour, and other student groups.

Beyond prison divestment, the movement will push against the criminalizing elements of university policy – promoting a “ban the box” campaign for university employees, and lobbying to banish regulations that allow for the revoking of financial aid when students are convicted of drug misdemeanours.

Nancy Uddin, another organizer in a public university in the northeastern U.S., began her school’s campaign after a retreat with groups like Enlace, which runs the most prominent prison divestment campaign in the country, and REC. The fledgling campaign has requested information about its university’s investments under the Freedom of Information Act, and is still waiting on a response before taking further steps.

“We’ve been meeting down low and discussing ways to begin our campaign, and we haven’t been publicized because we don’t want to scare anyone off or tell the administration that we are coming,” she told The Daily.

While G4S did not respond to an email request for comment from The Daily by press time, CCA pushed back against private prison divestment.

“Discussions about important issues such as criminal justice and corrections are only productive when informed by facts and rooted in honest discourse,” Jonathan Burns, Senior Manager of Public Affairs at CCA, told The Daily by email. “These campaigns are yet another unfortunate example of the lack of seriousness with which political activists approach the very real and practical challenges our nation faces.”

Mariame Kaba, the director of Project NIA in Chicago, which works against youth incarceration, and who tweets and blogs under the handle Prison Culture, noted the limited scope of prison divestment campaigns.

“The concept that prisons are about profit-making [is] putting us in a place where I think it’s comfortable for people who are liberal to latch onto that as the thing,” she told The Daily. “But the focus isn’t on profit-making. It’s on the friggin’ inhumanity of locking people up in the first place. It’s on the root problem, which is that we are actually using prison systems and punishment systems to control, manage, and oppress […] black people, poor people, and people who are trans, LGBTQ.”

However, Jamie Trinkle, Campaign Coordinator at Enlace, noted that to a large degree, private prison divestment campaigns do not aim to end the prison-industrial complex as a whole.

“Our objective is to break the lobbying power of the private prison industry,” she said, “so that we can get to a place where criminal justice reform and immigration policy reform are possible in a way that will allow people to live with dignity.”

Private prison companies – CCA being the most prominent – engage in extensive lobbying, campaign contributions, and political relationships, with their political influence largely being used in the interest of securing contracts for prisons, detention centres, and other security-related ventures. According to a Justice Policy Institute report, the three largest private prison companies spent $6,092,331 in gifts for state politicians from 2000 to 2011.

While many of the companies’ lobbying efforts have been focused on securing contracts in both prisons and immigration detention centres, they also benefit from harsher legislation that increases incarceration and criminalization overall.

Within this context, prison divestment campaigns will continue to spring up, with a continuing push for anti-private prison activism, compounded by the as-of-yet unseen investments hidden within university portfolios.

Ultimately, though, prison divestment makes up one piece of the spectrum of prison abolition. “This is not the end-all, be-all,” Kaba said. “The thing is, this is one way for us to chip at the huge behemoth of an issue that has its roots in the basic fabric in how our societies are operated and how they’re structured. This is a window for us to use – to try to get people to care about this issue in a very significant way. ”

A previous version of this article stated that REC was a university divestment campaign. In fact, REC is an organization that supports several campaigns. The Daily regrets the error.