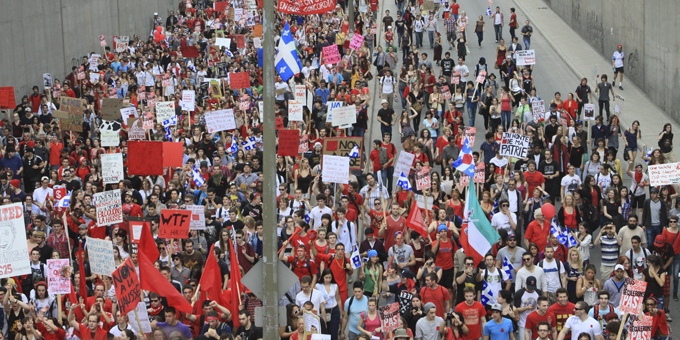 The three defendants, along with 291 other people arrested on March 22, 2013, were fined $637 under article 2.1 of bylaw P-6, which prohibits demonstrating without providing a route to the police. The judge ruled that this provision could only apply to the organizers of the demonstration, and further noted that failure to comply with the article did not create a penal offence, making it legally impossible to convict people on this basis.

“[The decision] is going to have a huge impact on the other P-6 cases that are still moving through the court,” said McGill student and member of the Legal Committee of the Association pour une solidarité syndicale étudiante (ASSÉ) Kevin Paul in an interview with The Daily.

Although the City of Montreal attempted to argue against the decision, stating that 1,200 people arrested under the bylaw would have to be acquitted, Richmond dismissed this argument, stating that “justice must be served in spite of the consequences.”

In his judgement, Richmond also expressed strong criticism of the SPVM’s handling of the distribution of the statements of offence, which were all signed by the same police officer to expedite the process, even though she had not witnessed the violations.

“Justice must be served in spite of the consequences.”

“The trivialization of this violation of the law by senior SPVM officers is staggering,” Richmond wrote in the judgement, in French. “It seriously undermines the confidence we can have in the documentary evidence that is used every year in thousands of criminal proceedings.”

“This part of the decision gives further backing to the claim that the SPVM arbitrarily arrested thousands of protesters since the student strike,” ASSÉ stated in a press release sent out on February 10.

For Paul, Richmond’s decision was not a surprise. “Anybody who witnessed the police procedure for mass arrest and ticketing of protesters would not be surprised by the decision to throw out the tickets on the grounds that the accusations were falsified by the police,” he said.

Paul was ambivalent about the effect that the judgement would have on future police behaviour.

“It’s hard to say how the police practices [will] change,” said Paul. “What we learned over the last few years is that the police will always adapt to […] repress demonstrations, and we need to be ready for whatever new laws or measures or police practices arise in response to this decision.”