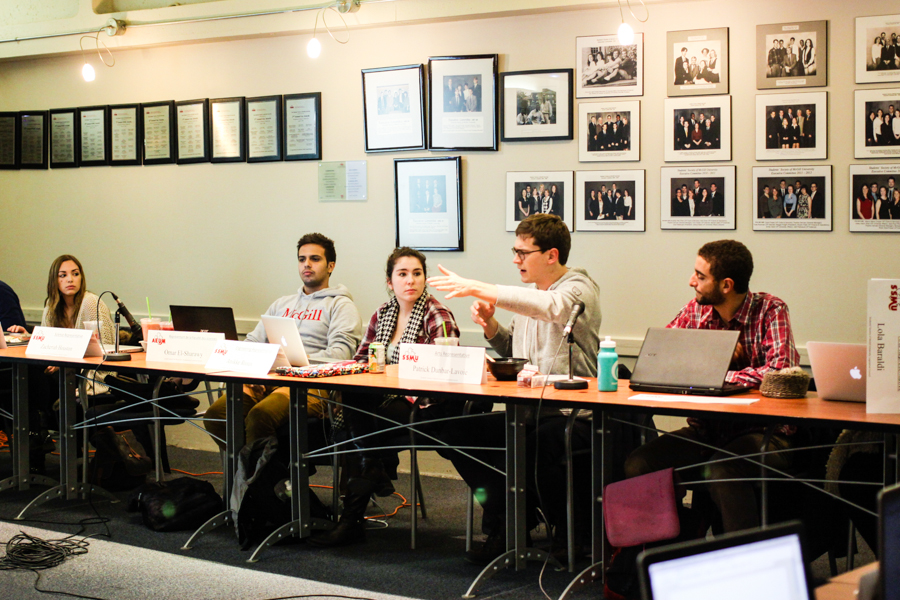 On November 20, the Students’ Society of McGill University (SSMU) Legislative Council convened to discuss the creation of a student engagement committee as well as student demand for reopening the Redpath Library doors. Deputy Provost (Student Life and Learning) Ollivier Dyens, who was present as a speaker, was also thouroughly questioned by Council about his commitment to food services on campus.

In his presentation, Dyens discussed his role as Deputy Provost, and spoke to the necessity of “finding a way to work together” with SSMU. A lot of the discussion surrounded the current food services on campus and student dissatisfaction about what is provided.

Arts and Science Senator Chloe Rourke asked Dyens about the lack of affordable food options on campus. “I know that’s a big issue for students,” said Dyens, going on to emphasize that McGill’s concern is directed toward “health and better food options.”

“We have fair-trade food now,” said Dyens, referring to the recent replacement of the Tim Hortons in the Redpath Library with a Première Moisson outlet. “Tim Hortons is a large corporation; it has no fair trade.”

VP External Amina Moustaqim-Barrette and VP Finance and Operations Kathleen Bradley both questioned Dyens on his support for student-run services. Dyens denied having ever claimed to support student-run services and told Council that the McGill administration is “not for these things.”

Moustaqim-Barrette asked Dyens whether his duty in a position representing students to the administration wasn’t “to represent the interest of students who are overwhelmingly in favour of student-run food services.”

“I represent the students, but we also have a business relationship,” Dyens responded.

Bradley was not satisfied with Dyens’ answers to the questions posed at Council.

“I think he is still new in his role and has a lot to grow,” she told The Daily. “Regardless of administrative difficulties, he is supposed to be the person who advocates on the behalf of students […] he has not demonstrated that in any capacity that I have worked with him.”

Creation of a student engagement committee

A motion was brought forth for the creation of an ad-hoc committee for student engagement, to be charged with identifying areas of miscommunication and improve SSMU’s communications strategy.

“It’s super important to create this committee because there’s a lot of rampant misinformation going about campus, and I think it’s our duty to address that and explore as many communication channels as possible,” Arts Representative Lola Baraldi, one of the movers, told The Daily.

Science Representative Omar El-Sharawy spoke strongly against the motion. “I have six hours of office hours per week and not a single member tries to come to me,” he said. “If [the constituents] want to be represented right, they need to put in the effort.”

“This committee is not for the purpose of re-identifying how SSMU communicates, but rather looking at a vision for how things can work in the future,” argued VP Internal J. Daniel Chaim.

Rourke expressed hope that the committee would improve SSMU’s response to “controversy on campus.”

Council also passed a motion calling on VP University Affairs Claire Stewart-Kanigan to “prioritize the reopening of the Redpath doors in her negotiations with the McLennan-Redpath Library.”

Moustaqim-Barrette, one of the movers, told The Daily that the issue had been brought to her attention by a student, Alexander Elias, who started a petition and a Facebook group to gather student support for reopening the doors, which currently only function as an emergency exit.

“[This motion is] something that is a direct response from student needs and wants and motivations, [and] a great demonstration of SSMU being open, responsive, and efficient in addressing student needs,” Bradley said during the discussion.