Call for an end to military research at McGill, more direct action 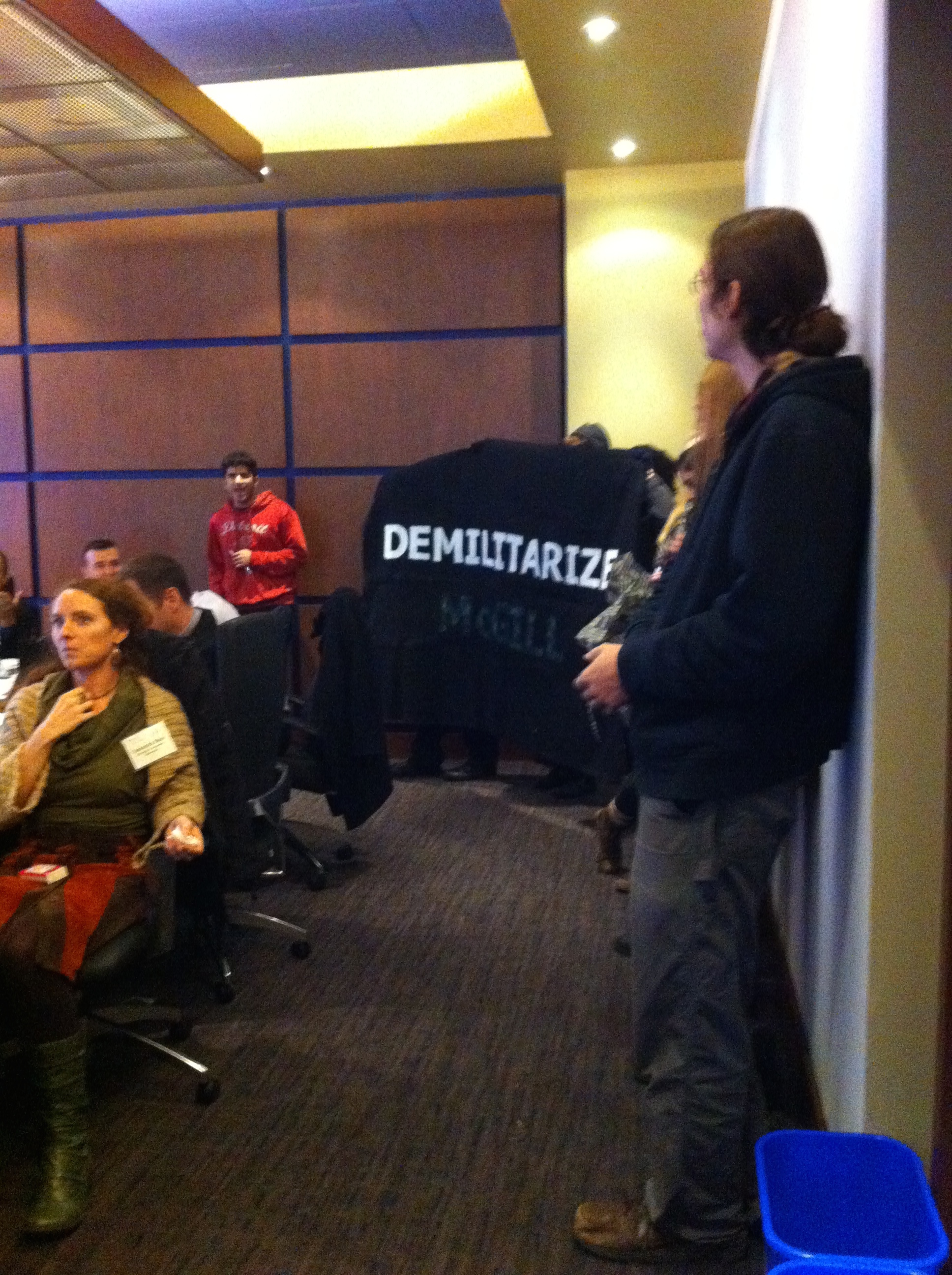 “A rational dialogue with the administration will not solve the issues at hand.”

These were the words of a protester at the disturbance of McGill’s Institute of Air and Space Law (IASL)’s five-day Strategic Space Law Intensive Program on October 28. The program is meant to train lawyers in how to navigate space law. About ten people, mostly McGill students, disrupted the conference taking place at the Best Western hotel with chanting and condemnations of the program before pushing past security and escaping arrest.

Students entered the conference equipped with noise-makers and a large banner that read “demilitarize,” chanting “a, anti, anti-impérialiste!” as they walked. Interrupting a presentation titled “Law on space exploration and exploitation,” they stood opposite the presenter and continued to make noise and chant more slogans such as “Colonizing outer space, fuck your bullshit arms race!” Attendees of the conference appeared bemused and put-off; many recorded the disruption on their phones, making a point of documenting the faces of each of the demonstrators.

Some in the conference room began to engage protesters. One man asked why they had come, to which one demonstrator responded, “We want military research off [the] campus. We want the IASL to stop [its research].” One man from the conference room asked the students to leave, saying that they should be conducting themselves in a more orderly manner.

Eventually, the hotel’s security was called. Security guards blocked the doors of the room, effectively detaining demonstrators while police were on their way. At this point, protesters moved to leave the conference, pushing past security and running down the stairs into the hotel lobby, where more security guards were waiting for them. The group was able to push past, and everyone escaped with the exception of one protester, who stayed to attend the conference and was allowed to leave later.

According to one protester, who wished to remain anonymous, the purpose of the demonstration was to “disrupt their workshop sessions, and have a presence that they weren’t able to ignore in opposition to the ideological project of the training week.”

“[O]ther forms of action, such as lobbying and symbolic protest, have proven ineffective and disempowering in the past, particularly at McGill,” the student protester told The Daily in an email. “[T]he University is economically and ideologically invested in the continuation of its complicity in warfare, with little regard for ethics or the objections of students.”

“With the Strategic Space Law Program, McGill is equipping the U.S. Air Force and other military interests to establish weaponized control of space, multiplying their capacity to kill and terrorize targeted populations on earth. This takes place behind the well-worn imperialist facade of promoting ‘rule of law,’” the protester told The Daily in an email.

IASL’s Strategic Space Law Intensive Program is a week-long event, running from October 27 to 31, and seeks to teach participants legal policy and “problem-solving skills” related to space law, as well as how to “broadly understand the interests and stakeholders in a variety of contexts associated with strategic space law,” according to McGill’s website. The program at McGill will be complemented by a graduate course on strategic space law in Winter 2015 at the University of Adelaide in Australia.

Both the Strategic Space Law Program and IASL have been condemned by campus group Demilitarize McGill, which has criticized these initiatives on its website for promoting the rule of law as a tool for the U.S. and its allies to exert control over outer space and better compete with “rival imperialist powers on the diplomatic level.”

Professor Kuan-Wei Chen, who works for the IASL and was present at the conference during the disturbance, found the demonstration ineffective. “[The protesters] were invited to come, they came, and what did they do? They shouted, they swore, they made a lot of noise, and then they left,” said Chen. “I really don’t see the purpose of that.”

According to Chen, the protesters misrepresented the strategic space law program. “This workshop that’s happening right now […] we want to emphasize to the military officers that there are certain things that you are restricted to do by the law.”

“What we’re trying to emphasize here is, there are tensions that are happening up there, there are extensions of conflict or tension on earth, we need to constrain those tensions with use of existing laws, but [the protesters] don’t want to hear this,” said Chen.

The protesters called for a larger movement to combat the expansion of military research.

“By showing that this form of action is possible, we also invite others to join us in building a movement capable of not only disrupting but shutting down this type of event, to realize a campus free of military collaboration,” the protester said.