Taking back the streets 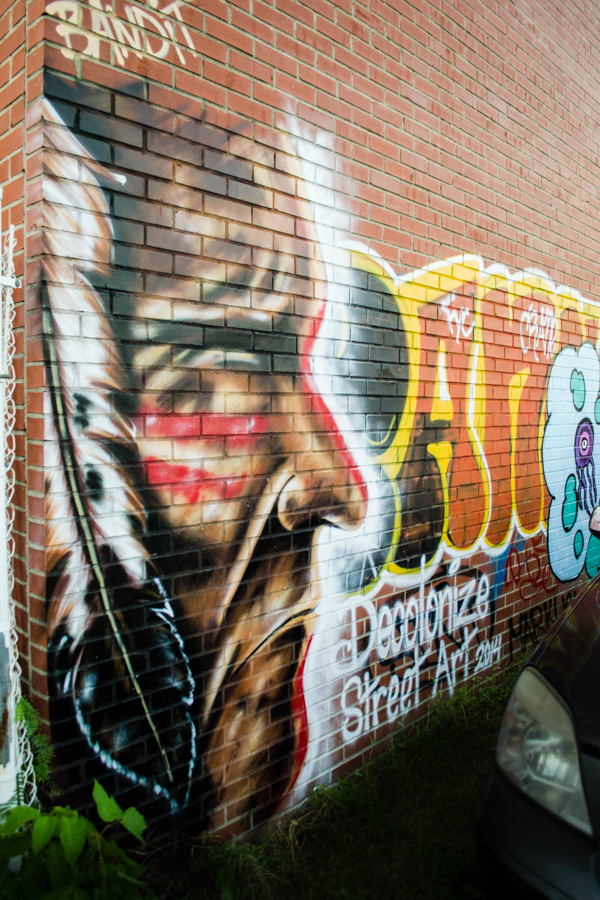 It’s not uncommon to see 14-year-old, middle-class white girls don moccasins, or concert-goers who decorate their heads with feathered headdresses. These are much more complex than just whimsical fashion choices; this is the cultural appropriation of Indigenous culture by settlers. How can the ignorance of Indigenous cultures within Western pop culture be addressed and publicized? As of the end of August, Montreal’s streets are replete with answers.

For the last two weeks of summer, the city was home to “Decolonizing Street Art: Anti-colonial Street Artists Convergence,” a gathering of artists that aims to assert and celebrate Indigenous cultures. Montreal, Canadian, and international artists spent their time here painting collaborative works around the city, as well as leading workshops on a variety of topics, from stencilling to cultural appropriation.

The Convergence has certainly left its mark – wheatpastes around the city proclaim “Decolonize Turtle Island,” the Indigenous name for North America. This new art serves to remind all settler occupants of Turtle Island to be conscious of their histories. The organizers hope their visuals will shock people out of their complacency.

The Daily met with Chris Bose and Bandit, two graffiti artists participating in the Convergence, to talk about their work, their medium, and what it means to establish anti-colonial values through art. Working in Little Italy in a back alley behind Marconi, Bandit and Bose had their hands dirty with spray paint and were well on their way to finishing a second wall of Indigenous art.

Bose is a self-described “jack-of-all-trades” from Kamloops, British Columbia. He writes poetry, makes films, and is the founder of the Arbor Aboriginal Arts Collective, a group that supports emerging Indigenous artists and promotes the creation and dissemination of Indigenous art.

To Bose, anti-colonial values mean Indigenous values, such as caring for the environment and having concern for the human race at large. “At this festival, I’m taking back wall space and painting Indigenous realities and art,” he says, “as opposed to ads and posters only aimed at getting you to buy something. ”

His murals illustrate this message well. One presents images of addiction, with bottles representing alcoholism, drug addiction, and even love, which he claims can be as addictive as any other substance. A crow standing to the far right of the mural carries the spirits of the dead to the spirit world, Bose explains. His larger mural on an adjacent wall depicts a school of salmon swimming in water that becomes increasingly polluted and murky, draining into a large pipe. The image refers to the recent Mount Polley mining disaster in British Columbia. On August 4, dirty water from the mine, potentially including chemicals like lead and arsenic, leaked into the nearby rivers, causing an environmental catastrophe for the surrounding ecosystems, according to Bose.

Bose paints these heavy issues because, for him, the purpose of art making is “to spark interest and awareness.” He hopes to force viewers to address events such as the Mount Polley disaster, which has received little mainstream coverage. “I want people to see my murals and ask, ‘What’s the art mean?’ and dig deeper to find answers,” he says.

Accordingly, Bose has little patience for those who turn a blind eye to Indigenous issues, especially when it comes to appropriating Indigenous symbols. He reprimands those who don’t know their history and flaunt headdresses without having “earned the right or the title to do so.” If people educate themselves, he says, it will completely change the way they view what now seem like trivial fashion statements.

Bandit, however, has a somewhat different view.

At the start of the interview, the Los Angeles-based street artist was holding a ‘Do Not Enter’ sign that had its middle white line replaced with natural scenery, and was about to reinstall it somewhere nearby. The natural environment contrasts against the concrete surroundings, both shocking and stimulating the viewer. He had also just wrapped up a profile of an Indigenous man with his head turned toward Bose’s work on the rest of the wall, as if bearing witness to his political and artistic creation.

“People don’t know the history,” he explains. “They’re just using Aboriginal culture to their advantage to make money. But at the same time, it promotes Aboriginal culture. I think it helps and it’s better to have exposure, even if it’s in the wrong way, than none at all. The way to reconcile this is through education, teaching people the history behind the symbols.”

Bandit and Bose can agree, however, on the blatant lack of education on current Indigenous issues in both the U.S. and Canada. Bandit posits that the public nature of street art makes the festival an integral educational tool. He points out that it’s public and accessible to all, with no entrance fees that would otherwise be associated with museums or galleries. Street art is also inherently political; it reclaims space, an issue especially poignant at a festival addressing colonialism. Bandit goes even further, proclaiming that “street art is anarchy – it fights the system.”

“I’ll paint any wall. I’ll avoid churches and buildings like that, but otherwise I’ll paint anything,” he says. “These buildings are established on land that isn’t theirs anyways, so why should I honour that ownership?”

Though the Convergence ended September 3, the murals are ready for viewing by any and all Montrealers in Little Italy, along with other wheatpastes and graffiti art around the city available to those who know where to look. The art is effective in its mere presence; it brings Indigenous issues to the forefront because they’re no longer out of sight and out of mind. Yet the art paints a picture of empowerment rather than victimhood. In claiming urban spaces, the artists assert their voices and the voices of the people they aim to represent. Their authorship is a conquest of cultural space. Montreal needs reminders of its colonial past, and this festival has woven these reminders right into the fabric of the city.

For more information about other artists and the festival’s projects: head to the Decolonizing Street Art Facebook page.