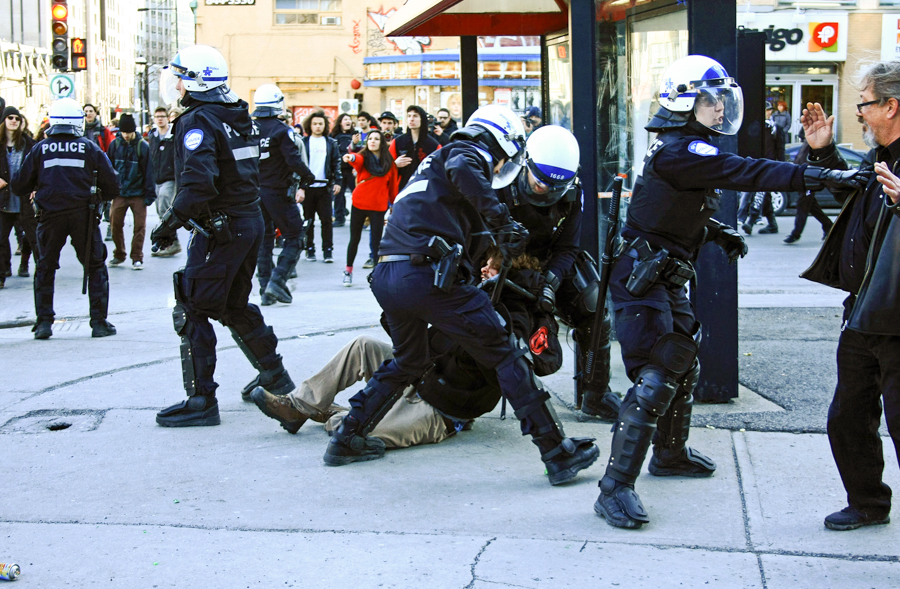 September 12 and 13 marked the debut of the public hearings of the Popular Commission on Political Repression (CPRP), aimed at collecting the information necessary to publish a comprehensive report on political and police repression in Quebec from 1990 to the present.

Taking place at Concordia University, the Montreal hearings were the first in a series of six. The next audiences will be held in Quebec City on October 27, followed by sittings in Gatineau, Kanehsatà:ke, Sherbrooke, and Uashat-Maliotenam, an Innu reserve in Northern Quebec. Due to the high level of interest, there will also be a second wave of opportunities for those in Montreal to testify in late October.

The project, initiated by the Association pour la Liberté d’Expression (ALE), intends to study repression extensively – including its legal and legislative repercussions, and the role played by media and police – and to evaluate its effects on individuals and groups.

Leading the hearings were professors Céline Bellot from Université de Montréal and Francis Dupuis-Déri and Lucie Lemonde from Université du Québec à Montréal (UQAM), as well as local commissioner for Montreal and spokesperson for the citizen movement Montreal-Nord Republik Will Prosper. They heard testimonials from individuals and representatives of advocacy groups, including students, Indigenous people, and union representatives, as well feminist, anti-capitalist, and environmentalist activists.

Many of the testifiers noted an increase in political and police repression since the 2012 strike. One person said that they “didn’t know what repression was until 2012.”

A member of an environmentalist organization said that the Service de Police de la Ville de Montréal (SPVM) has been dealing with the group differently since 2012. The group was informed that it was being monitored, and the SPVM has threatened its members. This has made it difficult for the organization to continue its work, the activist said.

However, Dansereau-Olivier emphasized that the CPRP also aims to examine repression before 2012 as an already institutionalized phenomenon.

“I think most people, when they think of political repression, they only focus on the strike of 2012, but we’ve had to do [hearings] from 1990 to 2014, because [repression] is not something that’s punctual, it’s something that happens, and we thought it’d be important to give people who have lived that voice.”

One activist shared that they felt that their advocacy group experienced repression in economic ways. After the group lobbied against an action taken by their representative, the latter failed to subsidize the organization the following year. Since then, the group’s efforts have relied solely on unpaid volunteers.

Dansereau-Olivier also highlighted the politically independent nature of the CPRP, contrasting it with the Commission Ménard initiated by the Parti Québécois (PQ) government to examine the “demonstrations and actions of disturbance” that occurred during the 2012 student strike. Its report, released last May, was highly critical of police tactics such as kettling and the use of rubber bullets, flash bombs, and pepper spray, but the PQ ultimately ignored its recommendations.

“The police did not want to testify there, because they considered it to be sort of biased […] and the student associations did not want to participate because they felt that it was biased. Neither side of the conflict really wanted to be there,” said Dansereau-Olivier. “[When it was released] it totally slipped under the radar, and in the next couple of days when, finally, there was a few articles about it, the government straight up said: we won’t be following any of those recommendations.”

“We felt it was important to have a commission made by the people for the people, where everybody could testify, where we would make them feel comfortable,” added Dansereau-Olivier. “The main reason that tells me this project is important is that there were so many people who volunteered to give their testimony. There was a real need to tell their stories.”

The publication of the report is expected in a few months. The ultimate goal is to further the study of how political repression is articulated and what can be done to fight it, according to Dansereau-Olivier.

“What’s really interesting is, we don’t know exactly where this will end because we need to collect all the testimonies from throughout Quebec. There’s bound to be a few surprises in there.”