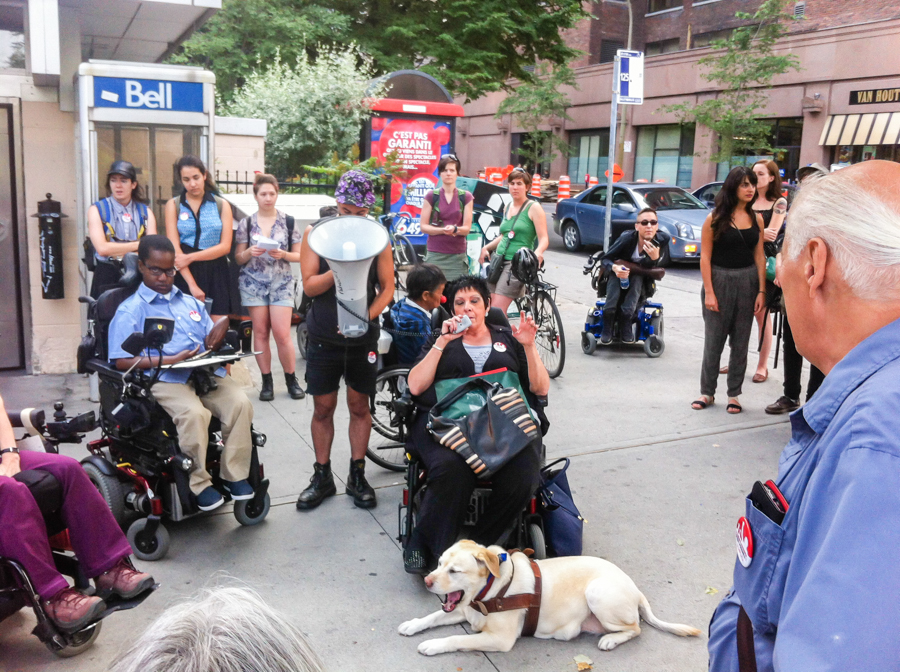 In an attempt to surprise the Société de transport de Montréal (STM), the anti-ableist group Accessibilize Montreal held a secret protest last Friday, calling on the government to modernize the metro system in a way that is more suited for people with disabilities. Around 50 people attended the demonstration, which was held at the Place-des-Arts metro station, just across from the site of the Just for Laughs festival, and lasted most of the evening.

The organizers of the protest at Accessibilize Montreal, a local organization that aims to make Montreal’s infrastructure more accessible to people with disabilities, hoped to keep their plans hidden from the STM by advertising primarily via word of mouth and social media. Ray Aldred, a PhD student in Philosophy at McGill and an Accessibilize Montreal organizer, told The Daily that this was intended to avoid any hassle with STM security that would have kept them from carrying out the protest and making their point clear to the public.

Attendees of the protest included members of Accessibilize, the Regroupement des activistes pour l’inclusion au Québec (RAPLIQ), and other organizations. They handed out buttons and factsheets to protesters, which provided statistics on all aspects of STM transportation – the metro, the bus system, and paratransit – detailing the inaccessible aspects of these services.

Of the 68 stations in the Montreal metro system, seven are equipped with elevators; of these, only four are located on the island of Montreal. In addition, not all buses have ramps installed – and of the ones that have them installed, almost half do not work, according to Accessiblize’s factsheet. Paratransit can be difficult to use, as it must be booked at least a day in advance and is often delayed.

Over 20 per cent of the population is adversely affected by this lack of accessibility, according to a statement released on the RAPLIQ website before the protest.

“If public transportation is unreasonably inaccessible, then that is considered discrimination against persons with disabilities,” Aldred told The Daily.

“We’re arguing that reasons for not making the metro accessible are kind of unreasonable and they’re not really acknowledging […] that we should be equally included like everyone else should be.”

These reasons are mainly financial, Aldred explained, as officials often claim that they do not have the funds to install more elevators in metro stations and ramps in buses.

“But, you know, if you don’t have enough money then you need to exercise some human ingenuity to get money, to make things accessible,” said Aldred. “You need to prioritize it in that way, because it’s considered a violation of someone’s human rights if you don’t have access to a large, publicly accessible location.”

Dixson Pushparagavan, a History student at McGill, noted that Montreal’s metro system is particularly inaccessible compared to other cities around the world.  “In London, […] almost all the transport is accessible,” he said. “They have a much older, bigger network and it’s way more accessible than this. And in Vancouver [and] Toronto too, [they have] much better systems.”

A difficult way of life

Many at the protest recounted the difficulties faced by people with disabilities who need access to public transportation.

Hélène Brouillette, a psychiatric nurse at the Douglas Hospital and a member of RAPLIQ, described how people with disabilities attempting to use the STM’s services often find themselves pushed to the side, with nowhere else to go.

She went on to explain that the paratransit system is extremely tedious for leisure travel, as it often requires booking up to 48 hours in advance in order to make an appointment, and the person using it is required to be ready at least an hour in advance of their scheduled ride.

In addition, certain elements of the system can be harmful to people in wheelchairs.

“Those things that open and close at the ticket booth, sometimes they close too fast, crunch people’s legs who are taking too [long] with the wheelchairs,” said Pushparagavan. “I know one friend who broke her leg going through there.”