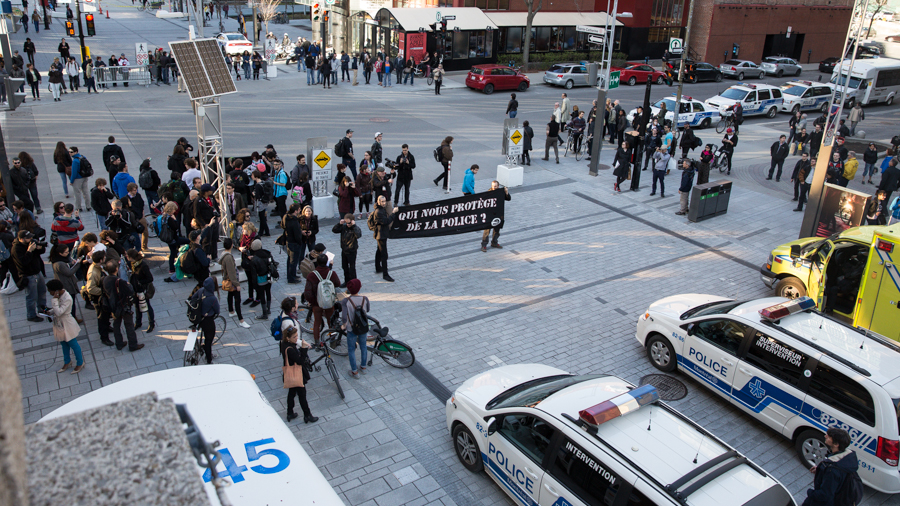 On May 7, Montreal saw another face-off between police and protesters, as a group of about 50 people gathered downtown to protest police brutality. The protesters, many of whom held signs denouncing violence on the part of the Montreal police, took over the corner of St. Urbain and Ste. Catherine. The Collectif opposé à la brutalité policière (COBP) and the Association pour une solidarité syndicale étudiante (ASSÉ) organized the demonstration.

Despite the relatively small number of attendees and peaceful nature of the rally, the police presence was significant. Dozens of Service de police de la Ville de Montréal (SPVM) officers surrounded the crowd, with some in riot gear, and over thirty SPVM vehicles were parked in the adjoining streets at the outset of the rally. Toward the end of the demonstration, two protesters were pulled out of the crowd and handcuffed by SPVM officers.

“Just [with] their physical presence and how they’re occupying the space, they’re intimidating protesters and people who want to question the established order,” said Brunet.

Several victims of police violence spoke at the rally, including Robert Fransham, who was at an anti-austerity protest on April 3 when he was knocked off his bike by a member of the SPVM riot squad, mid-charge. He subsequently spent three weeks in the hospital for injuries incurred as a result of the incident, including a minor concussion and six stitches on his leg.

Although Fransham had had previous altercations with the police, he told The Daily, “I’m more aware of their violence now than I was before.”

“There will be some legal action taken [for the injuries],” he added, declining to provide more details before his meeting with a lawyer next week.

Several members of the crowd had had personal encounters with the police that had spurred them to get involved in anti-police brutality initiatives. Katie Nelson, a participant at the rally, said that after being kettled multiple times and receiving thousands of dollars in tickets, she was filing a class action lawsuit against the SPVM for “systemic and constant political profiling.”

Following the speeches, one of the rally organizers announced that “contrary to [the SPVM]’s expectations,” the demonstration would not turn into a march, thereby avoiding the possibility that protesters would be kettled and ticketed $638 under municipal bylaw P-6. The bylaw, which prohibits demonstrating without submitting a planned itinerary to the police, is often used by the SPVM to break up marches that they have declared illegal.

Instead of marching, organizers distributed SPVM conduct complaint forms in stamped envelopes. They included a printed exemplar detailing Fransham’s injury on April 3rd with the suggestion that participants file a complaint on his behalf if they didn’t have an incident of their own to report.

Although the demonstration remained peaceful, tensions were visibly high between protesters and SPVM officers throughout, and heightened further following the two targeted arrests made by the police as the rally was winding down.

Adis Simidzija, one of the arrested protesters, is an independent journalist responsible for a highly-publicized video of an SPVM officer threatening to tie a homeless man to a post. Since then, he has been “a victim of the SPVM’s political profiling,” he told the Daily in French. He was arrested during the rally after placing a piece of paper reading ‘P-6’ in front of an SPVM officer, in protest of the municipal bylaw.

“[The officer] told me to pick it up while advancing toward me, and I didn’t even have a chance to pick it up before he handcuffed me in the plastic tie-ons [zip ties] and twisted my wrists, hard,” Simidzija said. “He kept telling me not to resist, even though I wasn’t resisting.”

Simidzija received a $101 fine for “dirtying the public domain” and was released approximately 45 minutes later.