Thousands of students take to streets to protest austerity policies 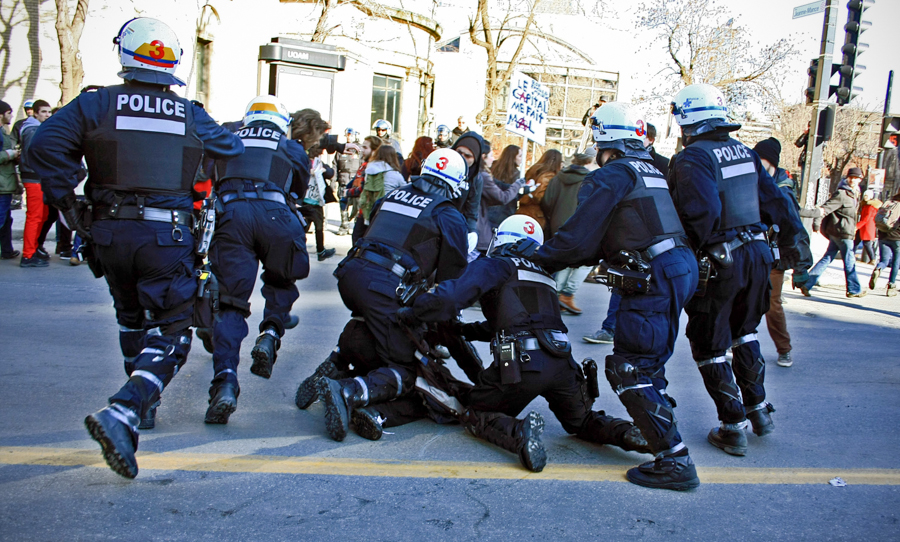 Between five and fifteen thousand protesters took to the streets on the afternoon of April 3 to call for the end of economic austerity policies in Quebec. Demonstrators gathered at Place Émilie-Gamelin and marched for over three hours throughout downtown Montreal.

The Association pour une solidarité syndicale étudiante (ASSÉ), one of the student unions behind much of the mobilization during the 2012 student strike, organized the protest. Approximately 60,000 students voted to strike on the day of the demonstration.

The Service de police de la ville de Montréal (SPVM) declared the protest illegal before it left Place Émilie-Gamelin, but let the protesters march for about three hours before intervening. In some instances, SPVM agents blocked off streets from traffic, and in others, protesters wound their way through cars on crowded streets.

At around 5 p.m., the SPVM’s riot squad charged on protesters and ordered the crowd to disperse, using rubber bullets and tear gas to break up the crowd. At least two people are known to have been injured as a result of the SPVM intervention – including a photographer from The Daily – while six were arrested.

Benjamin Gingras, finance secretary and co-spokesperson of ASSÉ, said in an interview with The Daily that ASSÉ decided to organize the protest to emphasize that austerity was not the only option.

“Yes, we’re always surprised that […] we can’t protest peacefully without being repressed and brutalized by this police force that [decides arbitrarily] when a protest can take place and when it cannot take place, but at the same time we’re not surprised because we know how the SPVM behaves.” – Benjamin Gingras

“We’re looking for a government much more […] engaged in social justice-oriented policies, or policies […] directed towards equality, and that’s just not happening, so we’re supporting the students here,” she told The Daily. “Women have been working in [areas where jobs are precarious] for many years, and it’s just getting worse under neoliberal paradigms, so we’d like to see that change.”

Although ASSÉ had already planned the march before the provincial elections were announced by the Parti Québécois (PQ) for April 7, Gingras said that it was nonetheless “a pleasant coincidence that this is a just a few days before the actual vote.”

Although ASSÉ has declined to endorse a political party, several contingents of provincial political parties were in attendance, including Québec solidaire (QS), Option nationale, and the Parti vert du Québec.

Geneviève Dick, the QS candidate in the Acadie riding, said that the coming to protests like the one organized by ASSÉ is an important part of the party’s platform.

“We’re not solely an electoral party in the sense that we’re not solely concerned with winning elections. We also want to support groups that put struggles [like this one] on the map every day,” she said. “As you can see, though, we’re at the back of the protest, because it’s very important to us to not take up too much space, and to really be there in support.”

Many protesters criticized the current PQ government. “[The PQ’s record] is horrible. I voted for the PQ, but I am very disappointed,” Carl, a student at Université de Sherbrooke, told The Daily in French. “Their big promises haven’t really been realized, such as the tuition hike, which they’ve hypocritically slipped through.”

Philippe Hébert, a software engineering student at Concordia, said he was there to protest how the current government has dealt with economic issues. “They’re pushing us into a corner and […] trying to tell us that […] our debt is too big, so that we won’t ever be able to have any services,” Hébert said. “But the only thing they’re actually trying to do is to take […] the wealth from us and be able to keep control.”

The otherwise peaceful march turned violent about three hours in, as protesters arrived at the intersection of Sherbrooke and Parc. Commotion began after SPVM agents ran into the crowd and made several targeted arrests. The police also used tear gas on the crowd, and in response, protesters threw projectiles – such as bottles – at the police.

Some protesters viewed the SPVM’s actions as a provocation. “It’s horrendous. […] The police are always provoking us,” Louis-Philippe, a student who attended the demonstration, told The Daily in French.

“I voted for the PQ, but I am very disappointed. Their big promises haven’t really been realized, such as the tuition hike, which they’ve hypocritically slipped through.” – Carl, protester

One of the several riot squad charges toward the end of the march left a man lying on the ground, bleeding from his head. The man, who looked to be in his fifties or sixties, was later taken away by an ambulance. A video clip from 99%Media’s livestream of the protest shows the man falling off his bike and clutching his head following the riot police’s charge.

Daily photographer Shane Murphy was also injured during the protest while he was taking pictures of the protesters getting arrested. One of the SPVM officers, he said, shot him “point blank” with a rubber bullet. He has since gone to the hospital for his injury [warning, gruesome image]. “[The impact was] like if you can imagine getting shot by a paintball times ten,” he said.

Before the protest began, many protesters believed that even though the march had been declared illegal, the police would not intervene. “I’m an older woman […] I’ve been to a lot of protests, usually everything goes fine,” protester Martine Lacroix told The Daily in an interview before the protest began. “The police presence seems reasonable to me, I hope that everything goes alright on both sides.”

In a phone interview after the protest was over, Gingras told The Daily that ASSÉ was both surprised and unsurprised by the march’s conclusion.

“Yes, we’re always surprised that […] we can’t protest peacefully without being repressed and brutalized by this police force that [decides arbitrarily] when a protest can take place and when it cannot take place, but at the same time we’re not surprised because we know how the SPVM behaves,” Gingras said, adding, “The protest went very well; it was peaceful, until the police decided to get involved and ruin everything.”