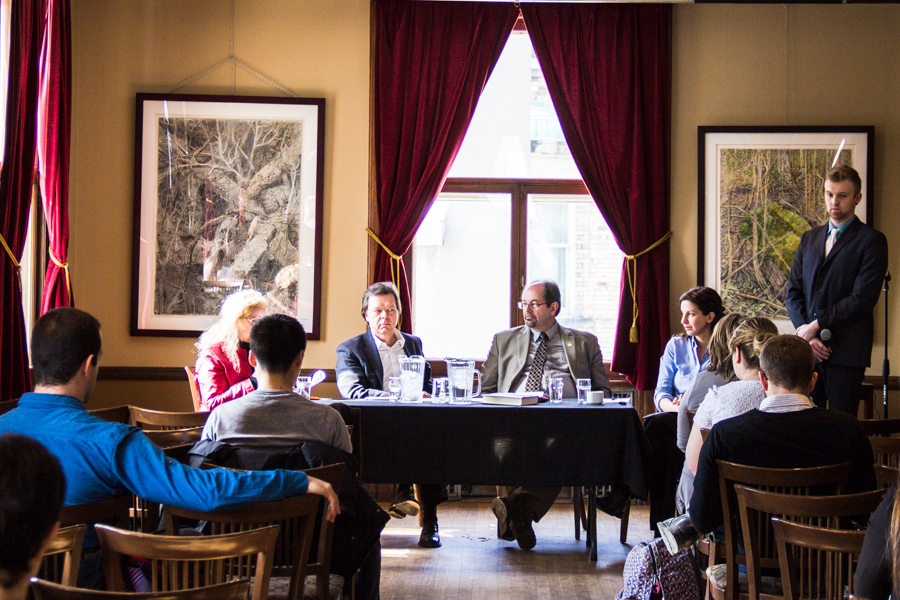 With a crowd of around 25 filling the Thomson House ballroom, the Post-Graduate Students’ Society (PGSS) hosted candidates from the four major provincial political parties for a debate that addressed higher education, the Charter of Values, and international students.

Evelyne Abitbol, a candidate in the riding of Acadie – which is currently held by the Parti Libéral Québécois (PLQ) – represented the Parti Québécois (PQ), the party forming the current government, who called the election in early March.

Geoffrey Kelly, a current representative for the riding of Jacques-Cartier for the sixth consecutive term, represented the PLQ, who were ousted from power in an election nearly two years ago in September 2012.

The representative for Québec solidaire (QS), Molly Alexander, is running in the Saint-Henri–Sainte-Anne riding.

Joseph Dydzak, a candidate for the riding of Vimont, was present to represent the Coalition Avenir Québec (CAQ).

Candidates commented on the recent controversy over students voting in the elections. Students have reported that they have been turned away from registering to vote, with election officials claiming that they are not domiciled because they are only temporary residents of Quebec.

On March 23, according to CTV, several PQ candidates, including Léo Bureau-Blouin, claimed that the election was being “stolen” by voters from outside of Quebec, especially new university students.

While Abitbol stated that electoral officials should take care of this controversy, Dydzak accused the PQ and its leader, Premier Pauline Marois, of “[trying] to make political capital out of it. […] If people fulfill the rules, they have the right to vote, and if they don’t, they don’t. That’s [the Directeur général des élections du Québec’s] job, and it shouldn’t be politicized.”

Alexander claimed that the people turned away from the electoral office were not just anglophone students, but also new francophone students.

“One of the five ridings where the complaints were made by the PQ was Sainte-Marie–Sainte-Jacques, where Manon Massé of Québec solidaire has a strong chance of beating the PQ incumbent, Daniel Breton […] Why? Because it’s new students […] and the Parti Québécois is afraid that the student vote will not come to their side this time, contrary to 2012.”

On higher education, candidates were asked about their plans to increase funding for research and universities in general. Last year, the PQ cut $250 million from university operating grants, leaving many scrambling.

Dydzak outlined the CAQ’s plans to focus on involving business in research, and encouraging more applied research that could be profitable.

As QS’s mandate also states, Alexander said that her party planned to make education free and accessible for all, and to improve both the amount of financial assistance available and the ease of qualification for this assistance.

Abitbol pointed to the PQ’s role in abolishing the so-called “abusive increase of tuition fees,” referring to the PLQ’s plan for tuition hikes of $1,625 over five years announced in 2011. Abitbol also told the room that the PQ planned to re-invest $1.8 billion over 5 years until 2018-19, although Kelly later criticized them for no concrete indication of this investment.

Kelly attacked the PQ’s claims that they were investing in research, pointing to $250 million in cuts from universities across Quebec. “In the last 18 months, we’ve seen a government that has reduced funding to our universities,” he said. “The government cut funding to research by $62 million last year – then they put [$26.5 million] back and said, ‘Aren’t we generous.’”

Instead of focusing only on research, Alexander also pointed to the problem of large class sizes and fewer professors, calling for more oversight over the internal finances of universities.

“I think that there is an important need to review the management of finances and funding allocation in all universities in Quebec, to put priority back onto actual education, and not necessarily emphasizing the money-making research departments.”

The next topic of discussion was the proposed Charter of Values, a bill that has been contentious since its introduction in 2013. The proposed Charter would, among other things, ban the wearing of certain religious symbols for those employed in the public sector, including professors, daycare workers, and judges.

While Abitbol tried to defend the Charter as a necessary instrument of state secularism, the Charter was roundly criticized by the three other representatives and students at the debate.

“[Abitbol] says that [the Charter] is popular. Well, protecting the majority rights will always be popular,” Kelly said. “But the reason we have charters of rights in our society is to protect minority rights. Minorities, by definition, are often unpopular in societies – that’s why we need charter rights to protect them. So if you have a poll to say the charter is popular, it’s irrelevant to the debate.”

While both Kelly and Alexander were staunchly against the Charter or any reiterations, Dydzak instead proposed an amended Charter that would implement “reasonable limitations,” such as banning judges or police officers from wearing religious symbols. When Kelly insisted that it was a non-issue, as many of these professions already have internal rules, Dydzak claimed the CAQ’s suggestions would “codify existing practices.”

Abitbol was also unable to defend the Charter to students when pressed on her comments that the Charter would not affect them. In response to a question in French from a student, which addressed how students in co-op, in medical school, or in other public sectors would be affected, Abitbol said, “Unfortunately, these are public institutions, and these public institutions need to stay neutral […] It’s not religion’s job to impose orders on the state, but for the state to impose its own ideology [of secularism].”