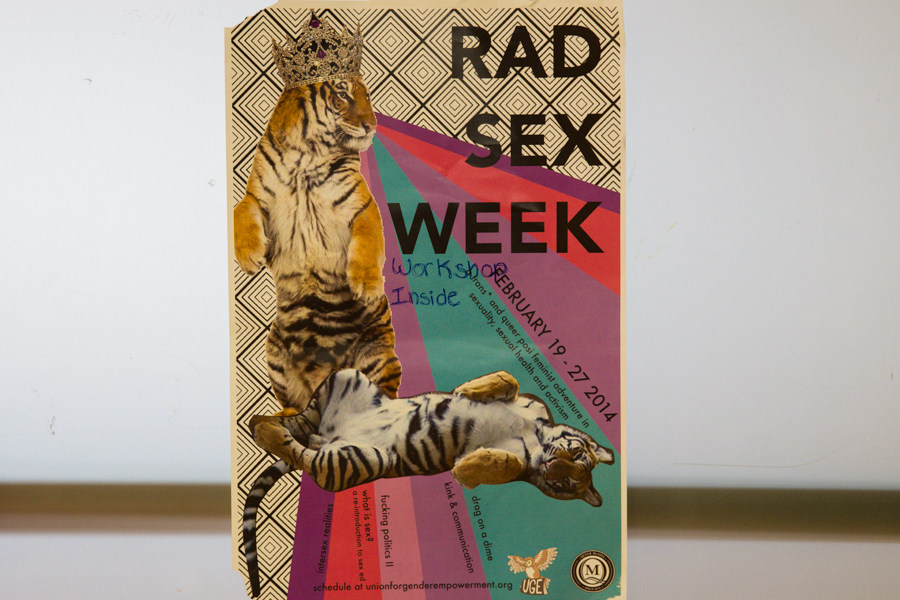 This past Wednesday marked the beginning of the Union for Gender Empowerment (UGE) and Queer McGill’s (QM) sixth annual Rad Sex Week, which aims to broaden the conventional understanding of sexualities and to give people more exposure to radical sex. According to QM Resource Coordinator Sabine Grutter, radical sex is defined as “Any sex that is consensual, outside the norm, and not talked about in the mainstream media.”

Lily Hoffman, a member of the UGE, explained to The Daily that the organization helped put together the series because “we don’t feel like there is enough of a platform for alternative radical sexual conversation and practice to happen.”

“We wanted to give a platform to people who are already doing these things and working in these organizations, to share these ideas with other people, and also to give a chance to people to explore things that they maybe have never heard of,” Hoffman added.

Cameryn Moore, a playwright, performer, and sex activist, expressed appreciation for the series and its links between politics and sexuality.

“I think that radical politics give us a chance to really explore and be free,” said Moore. “Generally when we are moving outside of the box, and when we are taking our sexuality outside of the box, and […] consciously thinking about what it is that we want and how we want it, there is a lot of territory there to discover, and that’s very exciting.”

Similar to other initiatives on campus, such as Rez Project, Rad Sex Week is a mobilization against events such as Frosh. “Based on my own understanding [… and from] continuous involvement in McGill, [events] that happen like Carnival or Frosh set kind of a standard of what sexual culture at McGill is,” Hoffman said, adding that this standard was “pretty non-consensual, intersects a lot with drug and alcohol use, and is very heteronormative and sexist.”

Rad Sex Week also allows students to interact with communities outside of the McGill bubble. “There is not always a connection between Montreal and McGill, and it is really great when those organizations that try to reach out and people that are interested are able to meet,” Amanda Unruh, Student Health Services Health Promotion Coordinator, told The Daily. Examples of these organizations are Stella, a sex workers’ organization, and Head & Hands, a group that provides medical, social, and legal services to youth.

Even though initiatives focused on alternative sexual education can be found in Montreal, they usually tend to be located in specific milieus. One major reason for this could be the lack of funding or public interest.

“I think that most of these groups and organizations that work on specific sexual issues or sex education issues are often non-profit, and struggling for funding and sustainability,” Hoffman said. “They usually have a pretty awesome group of committed people who want to make that happen, but always struggle for resources and struggle for recognition and validation.”

Grutter added that it is important to keep room for those initiatives. “[These spaces] are important because they didn’t exist beforehand. And if we are not going to create them, they are not going to be available to be explored.”

Moore, who originally came from the U.S., stated that Montreal was a much more open space for alternative sex practices than other cities. “Generally, I think the [one reason why] there is not a lot of room is maybe that there is not as much of a nightlife, like lifestyle clubs or play party clubs,” Moore said. “There is not a whole lot of that happening [in other cities].”

According to Unruh, it’s not only conversation on rad sex that is missing in Montreal; sex education in Quebec is greatly lacking. “[Reforms] in 2005 got rid of the class that used to teach sex education […] The health side of things ended up in the science class, so there still is this health and [sexually transmitted infection] prevention – which is mostly fear-based education, unfortunately – and pregnancy prevention, but nothing else.”

“There is no set curriculum that students have to go through; it happens in haphazard ways, sometimes not at all, and sometimes really awfully,” Hoffman added. “If the Quebec school system is not creating a way for people to learn these tools, or for people to be exposed to these things, then the only thing that we can trust that high school-aged youth will be exposed to are images of sex in the media, and depictions of sex, that for the most part are super sexist, heteronormative, racist, normative, and super non-consensual.”

“I can’t say that [sex is] going to save someone’s life necessarily, but it affects one’s quality of life and mental state so much,” said Moore. “That can transform people’s lives in a very serious way.”