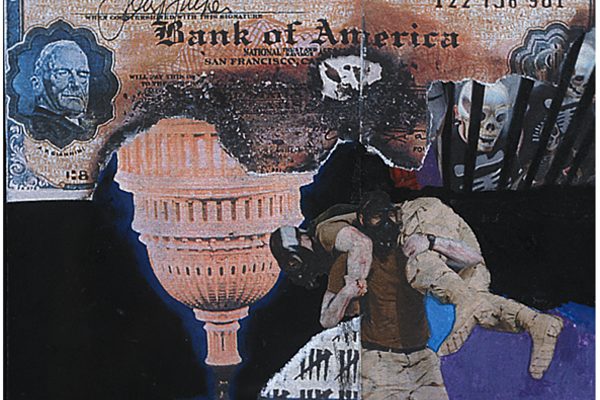 Stuck to a corner of Café l’Artère, a discreet 8.5 by 11 inch paper announces the presence of creative genius. “Teddy Harris’s work is the modernism of everyday perception and rationale. He makes works from vouchsafes and unrealized dreams, lies and advertisements for the nowheres. That is, he takes scraps of North America and threads them through his truthoscopic sensibility, for instance, pieces of newspapers, headlines, images from the diversity of our mostly grim experience, and he tells it to us again, and clearer.” Truthoscopic. Probably not the best word to get viewers excited.

But as it turns out, Teddy Harris’ collages are much better than their purple introductory blurb suggests. The viewer is confronted with terrifying, often absurd scenes of the disenfranchised and oppressed. In “Under Occupation,” three dark-skinned men in a rubble-strewn alleyway run from swooping helicopters, but Harris’s collages make it unclear whether those helicopters are real, or just more graffiti on a bombed-out building. In “Flesh Like Homes,” two African women carry water jugs in the night as an inferno blazes behind them, while the upside-down roof of the White House hovers in the air – or perhaps plummets down to earth like a missile – behind them. In fact, this upside down cupola pops up over and over in Harris’ collages, like a political version of Edward Gorey’s Passementeries horribles, a series of drawings all featuring monstrous tassels.

Café l’Artère itself is the perfect venue for Harris’ art. The collages are hung in front of the cafe’s huge windows, and Harris has crafted each collage in such a way that it is illuminated, not unlike a stained glass window. In one of the most striking pieces, “The Bible and the Gun (2001),” blood oozes from black gashes in the collage, and from block letters spelling KKK. The illuminatory effects of Café l’Artère make both blood and letters glow with ominous power. Yet despite the excellence of the venue, not enough effort has been made to draw attention to the collages, just that discreet 8.5 by 11 inch paper. The consequence is that Harris’ work isn’t being exhibited at all. Instead, poor presentation has reduced his collages to hip decorative wallflowers.

Thank goodness the art itself is better than that.