Science communication at the Redpath Museum 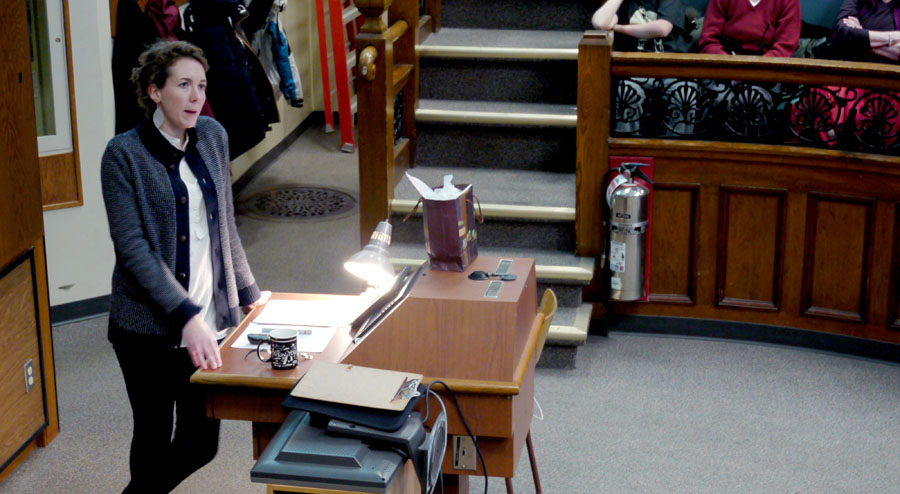 It’s no understatement to say that Charles Darwin revolutionized biology with his theories of evolution and natural selection. His legacy is celebrated every year on his birthday, February 12. Darwin Day is marked by events around the world ranging from open houses to lectures to debates. This year, the Redpath Museum hosted a talk by freelance science journalist Jennifer Carpenter entitled “How the big bang explains your sex life, or, the disconnect between science and media.”

It may seem like an unusual choice to focus a Darwin Day talk on how science is communicated rather than on evolutionary biology, but Carpenter emphasized that part of Darwin’s great success with evolutionary theory was the accessibility of his writing to non-scientists. He used metaphors and vernacular in ways that made sense to the (educated) masses in Victorian England, and because of that his ideas spread quickly, and not just within the scientific community.

The debate Darwin began within the general populace is far from concluded: the theory of evolution is still controversial and often misinterpreted in some settings. Ingrid Birker, science outreach coordinator for the Redpath Museum, noted that young people often come to the museum, which focuses on natural history, with questions and misunderstandings of evolutionary biology. Additionally, there’s still a substantial amount of debate around evolution in some religious communities.

Evolutionary theory is far from the only controversial topic in science: everything from climate change to vaccinations have become hot cultural debates, even when the scientific evidence is clear and cohesive. Carpenter used the example of vaccinations as an issue with enormous societal impact, regardless of whether the prevailing opinion in the public is in line with the evidence or not. These pressing issues highlight the need for transparency and accuracy in all science communications, in the Darwinian tradition. Because most people learn about science primarily through popular media, it’s especially important for science journalism to be accurate, as well as enticing and engaging.

But, as Carpenter pointed out, while journalism thrives on new information, new perspectives, and discrete events, science is slower, filled with caveats and nuances, and is much more of a continuous process than a series of individual events. This disconnect can frustrate both the journalist and the scientist: the journalist is looking for a tidy story with a clear conclusion, and the scientist sees a result as a part of a much larger, complicated, and evolving picture. While the journalist will shape the story and the headline to attract readers, the scientists often object that the entire picture wasn’t presented. But caveats don’t attract eyeballs, and even if an article is extremely precise, if no one reads it, it will have little effect on the public’s broader scientific understanding. A catchy title, with a little bit of sensationalism (and often a lot of simplification), has a better chance of catching a reader’s eye, and thus a better chance of communicating the scientist’s results.

But threats to science journalism do not come solely from within; the relative lack of science media means that it is that much more important to get what does exist right. The media landscape is shifting, with people now getting their news online rather than in print newspapers, and the pace of news is rapidly increasing as a result. As science journalists and scientists alike adjust to this shift, perhaps they should look to Darwin for guidance on how to effectively communicate important, even possibly radical, ideas to a wide audience. It’s just as important now as it was in Darwin’s time, especially as we respond to a shifting climate. As Carpenter emphasizes, “If [science communicators] stop talking about science, then people will find other ways to explain the world around them.” It is crucial, then, that scientists and science journalists find a way to keep the discourse both alive and accurate.