The Proof Is in the Points 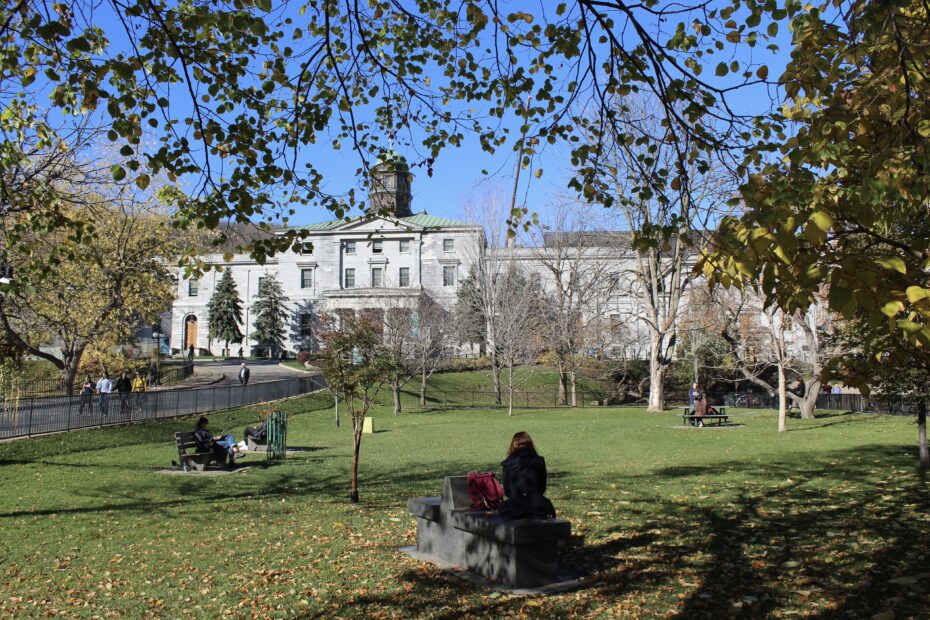 If you were reading The McGill Reporter in September, you might have come across an article titled “McGill ranks high in Sustainable Campus Index.” If you were surprised by the title of that article, you were not alone. As the research and activism conducted by Divest McGill has revealed, McGill doesn’t exactly have the best track record when it comes to sustainable investment. According to Divest estimates, 5.4 per cent of the university’s direct equity and fixed-income investments in corporate entities – an amount totalling $65,702,440.37 CAD as of November 30, 2021 – is invested in oil and gas. The university-organized Committee to Advise on Matters of Social Responsibility (CAMSR), meanwhile, has stated that “the beneficial impact of fossil fuel companies offsets or outweighs injurious impact.”

Given our university’s reluctance to divest from fossil fuel companies, it struck me as odd that it would score highly in any test of sustainability. I decided to do some digging. I read through the reports of the Association for the Advancement of Sustainability in Higher Education (AASHE), the organization that publishes the Sustainable Campus Index. Sure enough, I found that the data on which McGill’s sustainability scores are based is misleading – and, in some cases, incorrect. They paint a false picture of a sustainable campus, and they obscure the need for progress in important areas.

About the Sustainable Campus Index

In 2006, the Higher Education Associations Sustainability Consortium (HEASC), a network of higher education associations committed to advancing sustainability, issued a call for AASHE to develop a campus sustainability rating system. Following an “extensive stakeholder engagement process,” AASHE introduced the Sustainability Tracking, Assessment & Rating System (STARS). STARS was designed to provide a framework for understanding sustainability in all sectors of higher education, to enable meaningful comparisons within and between post-secondary institutions using a common set of measurements, and to create incentives for improvement in sustainability. It evaluates the performance of post-secondary institutions across the globe in 17 sustainability impact areas, including Air & Climate, Energy, Investment & Finance, Research, and Waste. These impact areas are not weighted evenly, and each may not apply to every institution. For instance, while a school may earn up to 40.00 out of a possible 100.00 points if it has a Curriculum that promotes sustainability, it can earn only 6.00 points for sustainable Water practices. Depending on the number of points an institution earns in each category, it may be awarded a STARS Bronze (minimum 25 points), Silver (minimum 45 points), Gold (minimum 65 points), or Platinum (minimum 85 points) seal or be recognized as a STARS Reporter.

The information collected and published by AASHE is entirely self-reported. It is up to colleges, universities, and other post-secondary institutions themselves to measure their sustainability efforts and submit – or not submit – supporting documentation to AASHE. Without a third party to corroborate the information it provides, there is ample room for the desiring institution to misreport its numbers and misrepresent its progress. While AASHE provides incentives for institutions to have their data internally reviewed or externally audited, this is only optional.

The 2022 Sustainable Campus Index relies on the most recent valid report of each participating institution, with reports valid for three years after review. McGill’s last report was submitted in December 2020 and will be valid through February 2024. It was compiled by Karen Oberer of McGill’s Office of Sustainability and audited by Cassandra Lamontagne of Concordia University’s Office of Sustainability.

Competing against more than 900 institutions from 40 countries in 2022, McGill ranked within the top ten for three categories: it ranked fourth in Purchasing, tied for fourth in Grounds, and tied for tenth in Transportation. Based on its December 2020 report, McGill was awarded a score of 76.69 points and a Gold seal. By comparison, Concordia scored 72.00 points, the Université de Montréal scored 54.78 points, and the Université du Québec à Montréal scored 45.28 points. Only twelve schools, including one with an expired rating, have a Platinum seal; two of these, Thompson Rivers University and Université de Sherbrooke, are in Canada.

In what follows, I break down McGill’s performance in the Purchasing, Grounds, and Transportation categories with the aim of discovering what each point means and what each point can reveal – or not reveal – about McGill’s sustainability efforts. I also comment on our university’s performance in the Diversity & Affordability category and highlight areas in which McGill needs to see the most improvement.

Under Purchasing, a category worth 6.00 points overall, McGill awards itself complete or near-complete marks for Sustainable Procurement (3.00/3.00), Electronics Purchasing (0.96/1.00), and Office Paper Purchasing (1.00/1.00). It doesn’t fare as well in the Cleaning and Janitorial Purchasing subcategory, earning 0.67 out of a possible 1.00 point; this is on account of the fact that it spends only two-thirds of its cleaning and janitorial products budget on “products that are third party certified to meet recognized sustainability standards.” I note that many of the points awarded in this category are for sustainable purchasing guidelines rather than proof of sustainable purchasing. McGill provides ample evidence of such guidelines, but AASHE’s requests for documentation to support the financial figures it provides are often declined, the relevant boxes filled not with links but with three lonely dashes.

There’s some suspicious activity going on under Grounds, for which McGill receives 2.00/2.00 points for Landscape Management and 2.00/2.00 points for Biodiversity, too. For one thing, McGill reports that the total area of the McGill campus measures 1,723.96 hectares, but the total area of “managed grounds” on which it reports measures just 37.35 hectares. While most of the area not included in McGill’s report is part of natural reserves – the Gault Estate covers 1,000 hectares, the Molson Nature Reserve 51 hectares, and the Morgan Arboretum 245 hectares – I’m concerned as to why it didn’t include data on the 110 hectares of “[e]xperimental agricultural land on Mac Campus.” How is this land being managed, and what kinds of “experiments” are being conducted on it?

Further, McGill reports that all 37.35 hectares of its “managed grounds” are managed organically, “without the use of inorganic fertilizers and chemical pesticides, fungicides and herbicides,” and that none of this same land is managed “in accordance with an Integrated Pest Management (IPM) program that uses selected chemicals only when needed.” In a later description of its land management program, however, McGill admits that “[c]hemical rodenticide bait boxes are used outdoors around buildings when necessary as per the IPM plan.” This, as we shall see, is not the only case of discrepancy between the numbers McGill provides and its explanation of those numbers.

In the Transportation category, McGill receives 4.57/5.00 points for its Commute Modal Split. Here, McGill can take credit for the fact that 94 per cent of its students and 80 per cent of its employees use “more sustainable commuting options as their primary mode of transportation.” Due to McGill’s prime downtown location, however, most members of the McGill community can live within walking distance of the university or within easy access of public transport. It is no coincidence that nine of the other ten schools joining McGill in the 2022 Index’s top ten list for Transportation are also located in major cities, with three other schools located in Montreal. This is not a measure of effort but a measure of advantage.

McGill’s high Commute Modal Split score compensates for a staggeringly low Campus Fleet score: 0.06/1.00. In 2019, the most recent year for which data are available, McGill maintained a campus fleet of 142 vehicles, of which 84 were gasoline-only, 49 were diesel-only, and just eight were fully electric. This is a measure of effort, and six per cent is not nearly enough.

The Sustainable Campus Index considers not only the environmental sustainability efforts of institutions but their social sustainability efforts, too. The Diversity & Affordability category, for instance, evaluates institutions’ equity and diversity strategies, the support they provide for underrepresented and marginalized groups, and the extent to which they make education accessible and affordable for all. Diversity is a hot-button issue at McGill, as at other universities, and given the controversy surrounding the lack of Black and Indigenous faculty at McGill, I was interested in hearing what our university had to say about equity and diversity.

To no surprise, McGill awards itself full marks for Diversity and Equity Coordination, but in at least one area, these marks are based on misleading data. McGill reports that all students, academic staff, and non-academic staff have completed training in “cultural competence, anti-oppression, anti-racism, and/or social inclusion trainings and activities.” This is only half true. While it is mandatory for all students, academic staff, and non-academic staff to complete the “It Takes All of Us” education program – and it is to this program that McGill points when asked for a description of its “trainings and activities” – that program addresses only the issue of sexual violence. The other programs McGill highlights are: Equity in the Academic Search Process, a mandatory two-hour training session for members of academic search committees; various programs organized by McGill’s Equity Education Advisors, including the SKILLS21 workshop series; and the Indigenous Education Program, an initiative of the First Peoples’ House. These programs are not all mandatory, they are not all widely known, and they certainly do not cover all aspects of “cultural competence, anti-oppression, anti-racism, and/or social inclusion.” I do not mean to suggest that McGill should institute mandatory training in these areas – the effectiveness of It Takes All of Us is up for debate – but for McGill to suggest that all of its students, academic staff, and non-academic staff have been adequately trained in them is far from the truth.

What that McGill Reporter article from September doesn’t tell you is that, as impressive as McGill’s performance in Purchasing, Grounds, and Transportation might appear, these are not the most heavily weighted categories in the Sustainable Campus Index. This means that they are not – at least according to AASHE – the most important markers of an institution’s sustainability efforts. McGill is missing more than ten points in the Curriculum category, worth 40.00 points. It achieves just 0.11/8.00 points for Buildings, 3.40/10.00 points for Energy, and 2.98/8.00 points for Food & Dining. Instead of congratulating McGill for its easy As in Purchasing, Grounds, and Transportation, we should be protesting its unsustainable Building Operations and Maintenance (0.00/5.00) and demanding more Clean and Renewable Energy (0.00/4.00).

When it comes to painting an accurate picture of McGill’s sustainability practices, there is only so much proof these STARS points can provide. What they reveal beyond a doubt, however, is that our university cares about its reputation – about what it means for a school to look sustainable regardless of whether that school can be sustainable. McGill aims to achieve a Platinum seal by 2030, but if it does succeed in making the jump from 76.69 points to 85 or more points in the next eight years, we will have to ask ourselves how much of this increase came from effort and how much of it came from advantage.

None of this is to suggest that McGill is not making real progress toward a more sustainable campus and a more sustainable future. Its STARS score is impressive, and its Climate & Sustainability Strategy is extensive, thoughtful, and achievable. My intention is only to remind any who might be impressed by McGill’s high scores, ranks, and ratings that our university has more to gain from the appearance of sustainability (or any other marker of success) than sustainability (or any other marker of success) itself. We must continue to push McGill to make good on its promises. Push it to turn away from scores, ranks, and ratings and toward its student body. Push it to close the gap between appearance and reality.

A previous version of this article attributed all parts of McGill’s 2020 STARS report, including all direct quotations, to Sustainability Officer Karen Oberer. In fact, although Oberer compiled and submitted the report, information was gathered from numerous sources across the university, and not all descriptions were written by Oberer. The article has been amended to reflect this fact. The Daily regrets this error.