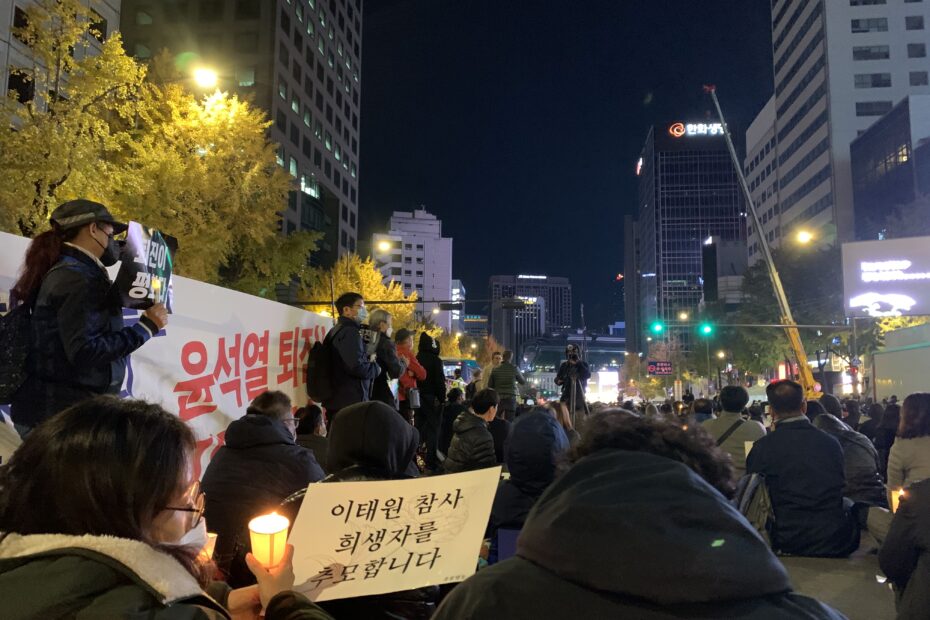 Thousands gathered in central Seoul at a candlelight vigil on November 4, a week after the deadly Halloween crowd crush in Itaewon that took place on October 29. Organized by the civic group Candlelight Action, the vigil commemorated the 158 people killed during the disaster. The victims, mostly young women, were among the estimated 100,000 people who went to the highly anticipated post-pandemic event held in the Itaewon nightlife district in Seoul to celebrate Halloween.


Public anger soared immediately after the crowd crush, one of the country’s deadliest disasters. Citizens, religious leaders, and bereaved families requested for the resignation of President Yoon Suk-yeol, demanding how the country could possibly mourn without knowing the truth behind the deaths. Many held signs that said “Step Down, Yoon Suk-yeol.” Investigations remain underway, but so far they reveal that multiple calls to the police asking for help with crowd management were largely unaddressed. According to transcripts released by the National Police Agency, 11 calls were made on the night of the tragedy to the police emergency hotline between 6:34 p.m. and 10:11 p.m.. These calls were all made from the alley in which the deaths occurred by people who reported that the area was overcrowded. Police told callers that they would dispatch officers to the scene, but failed to take any useful action there.

During the following nights, over 1,100 police officers were controlling the candlelight march organized by a coalition of progressive activists. This rally was part of the ongoing protest for president Yoon’s resignation, and a call for a special prosecutor to investigate his wife Kim Keon-hee’s manipulation of stock prices. The rally was held near the president’s office in Yongsan, located less than a mile from the disaster site. This testifies that the Ministry of Interior and Safety, the government institution that is responsible for disaster and safety management, cut back police personnel enforcing public safety – to provide security for the presidential office. For a country that usually has crowd management down to a science, the incompetency seen during the Itaewon disaster came as a shock for many. The lack of proper handling of the Halloween crowd crush by the police has since led the public to question the government’s competency in this regard. Especially the Ministry of Interior and Safety, putting president Yoon’s security ahead of the public’s.

South Korean law enforcement officials have acknowledged that there was insufficient safety planning for a crowd so large. As a result, the public has accused President Yoon Suk-yeol’s government of not taking responsibility for the disaster. What happened in Itaewon hauntingly resembles the Sewol ferry disaster in 2014: when a sinking ferry claimed the lives of over 300 people, most of whom were high school students. The Sewol disaster is another “man-made” disaster that could have been avoided had the authorities prepared in advance. Those that witnessed the disaster at Sewol have drawn parallels between the Halloween crowd crush and the ferry disaster. According to the Ministry of the Interior and Safety, more than 100 of the 158 victims in Itaewon were young women in their 20s. Of the thousands of sticky notes placed at Exit 1 of Itaewon Station mourning the deaths of those killed in the crowd crush, 26 directly mention the Sewol disaster. “Eight years ago, when I lost friends in the Sewol ferry disaster, I thought those were my last tears, but now I’ve lost friends again. I really hope this is the last time I lose someone…I miss you, my friends. 2022.11.04 REMEMBER,” reads a particularly poignant note.

Those in positions of power attempt to evade responsibility for the tragedy. Under the direction of the Prime Minister’s Office, the government has ordered for the universal use of terms for the incident to be the “Itaewon accident,” and stipulated that victims should be dubbed the “deceased and injured.” These framings show the unjust way in which the government and higher-ups are evading the public’s calls for accountability, by implying that this is just an “accident.” Nevertheless, civil societies and people have been holding a candlelight vigil every Saturday, in front of the capital’s city hall, to remember what had happened and hold the government accountable.