Montrealers express their solidarity following the killing of Mahsa Amini 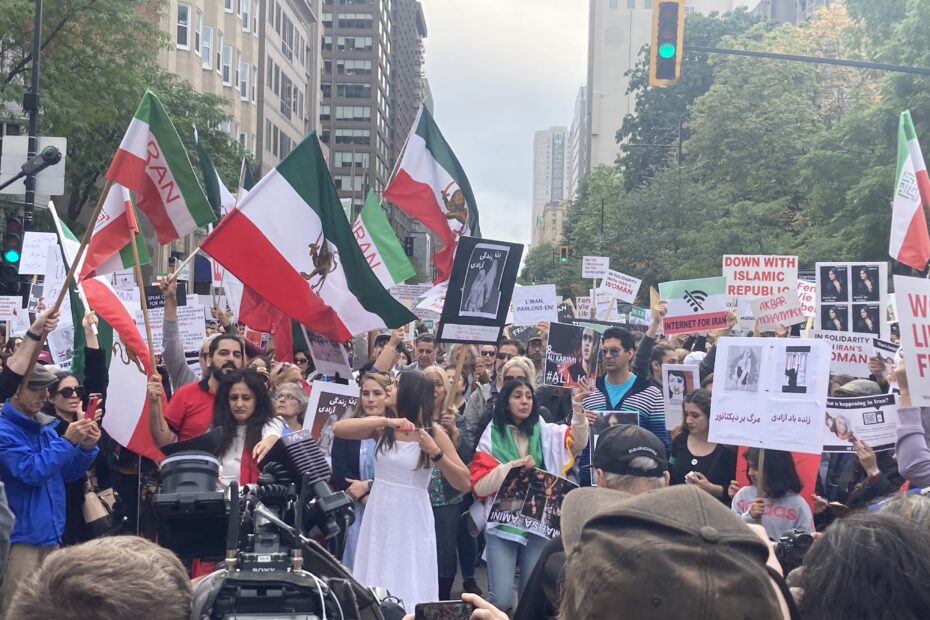 On October 1 cries of “Femme, Vie, Liberté” echoed through the streets of downtown Montreal. Thousands of Montrealers of all ages, genders, and ethnicities gathered in solidarity with the women of Iran who are taking a stand against the country’s fundamentalist regime.

The protest in Montreal is just one of hundreds across the world organized in response to the killing of 22-year old Mahsa (Jina) Amini by Iran’s “morality police.” Amini was initially arrested by the morality police for her failure to comply with Iran’s mandatory hijab laws. While in the police van, according to the testimonies of her co-detainees, Amini was brutally assaulted by officers.

The official explanation for Amini’s death was that she passed away from multiple organ failure as a result of pre-existing conditions, but that explanation has been contested by Amini’s family. According to those closest to Amini, she had no medical history that would cause her to drop dead suddenly. Leaked hospital records also showed evidence of skull fractures, a brain hemorrhage, and a brain edema, further contradicting the official government explanation. In a since deleted post on social media, the hospital that Amini was admitted to confirmed that she was brain-dead upon arrival.

Before the march began, the organizers played the song “Baraye” by Shervin Hajipour on loudspeakers. The song, the title of which translates directly to “because of,” is made up of dozens of tweets from Iranian women that state why they are protesting. After garnering over 40 million views in just 48 hours, the song was taken down from Iran’s internet and Hajipour was jailed.

While the song was playing, several women cut their hair in an emotional display of solidarity and protest. The reason for this form of protest traces its roots in ancient Iranian history, where women have shaved their heads in protest for thousands of years. The practice is even mentioned in Shahnameh, an ancient Persian epic and cultural touchstone of Iran.

The Daily spoke with several Iranian citizens who joined the Montreal protest who reiterated that Amini’s killing was not an isolated incident. “It’s been going on for years, this is just a continuation of previous demonstrations. Every time something like this happens, there are protests, and there are crackdowns,” one protestor told the Daily on the condition of anonymity.

Another protestor said that she was interviewed by the Daily in 1994 during another protest for Iranian women’s rights. At the time, they were demonstrating to commemorate the death of Homa Darabi, a 54-year old Iranian pediatrician and activist who, in a form of protest, had removed her hijab and set herself on fire in a crowded Tehran public square. Dr. Darabi died of her injuries the next day. “I think it is really important that we keep saying her name, and for your readers to know why we keep doing this,” she said, “This is not the first time that we’ve come out here, but we hope that it will be the last.”

Iran’s mandatory hijab laws officially came into effect in 1983, four years after the Islamic Revolution which put the fundamentalist cleric Ruhollah Khomenei in power. Penalties for violating the hijab laws were only introduced to Iran’s criminal code in the 90s. One of the protestors, who was a child at the time of the revolution, told the Daily “little by little, they added laws and took away our freedoms.”

Several protestors in attendance held signs reading “Woman, Life, Freedom,” a slogan that has become a battle cry for Iranian women. Others held long banners that read “No To Islamic Republic,” while some held posters of Mahsa and other victims of Iranian government violence.

After four weeks of protests in the streets of Iran, at least 185 protestors have been killed including 19 minors. Some protestors, afraid to go to the hospital for fear of being arrested, have resorted to finding doctors online to learn to treat their own wounds. Government officials pin the blame on a host of different political enemies, including Kurdish groups.

The government has also severely restricted access to the internet in the country in an effort to halt attempts to organize. Riot police also raided Sharif University, one of the country’s largest educational institutions, after widespread student protests. Thus far, the Iranian government’s efforts to crack down on dissent seems to have backfired, only increasing awareness and resolve among Iranians and the global community at large.

While  protesters were hopeful, there remained a sense that these incidents will continue to happen unless there is a regime change. “The Islamic Republic of Iran is not Iran. We have a long history as a free country and we will overcome this regime.” said one protestor. When asked if he had hope for the future he said, “We will see […] maybe this is a turning point, maybe it isn’t, but we know that this[ regime] cannot last forever.”

Protestors are continuing to organize in solidarity in Montreal, with the Coalition for Iranian Human Rights McGill (CIHRM) organizing a candlelight vigil on October 7. You can continue to follow organizations like CIHRM for future action.