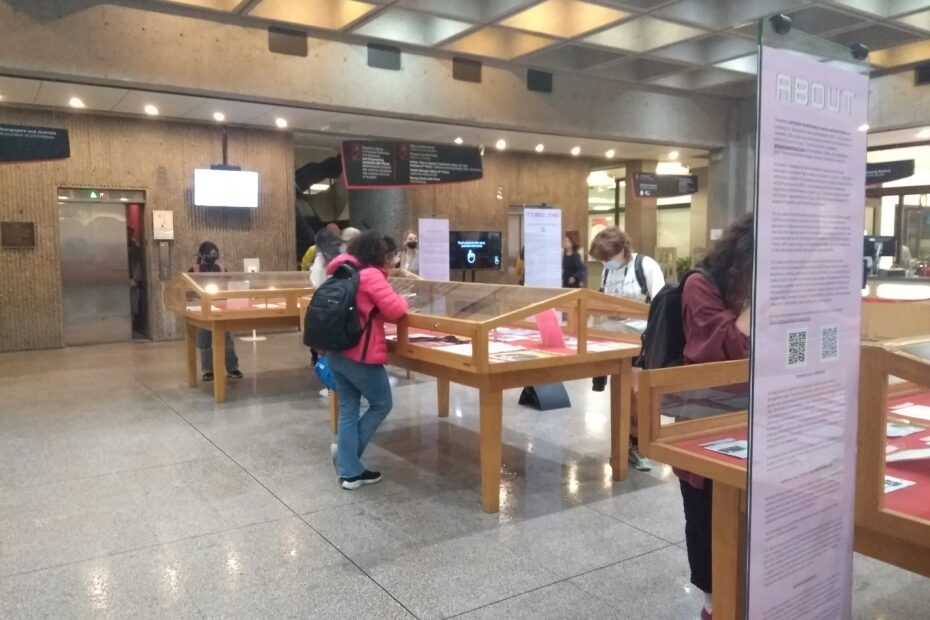 On October 26, the vernissage for the Exhibit on LGBTQ2+ Activism took place in the McLennan Library Building. This exhibit, curated by Dr. Alex Ketchum and Jacob Williams, showcases the work of students, faculty, and staff who advocated and supported the rights and safety of LGBTQIA2S+ communities at McGill, specifically highlighting activism from the mid-20th century to the current day. Though the materials in the exhibit span McGill student, faculty, and staff activism in 1914 to the present, they specifically focus on the period from the 1960s onwards. The Daily spoke to Dr. Alexandra Ketchum, the McGill professor who organized this exhibit, to learn more about the exhibit and to gain insight into why it is needed at McGill.

“I think there wasn’t a lot of awareness on campus about the activist history,” Dr. Ketchum explained when asked what inspired her to create this exhibit. “I wanted to help connect current folks on McGill’s campus with these past histories both because they’re inspiring, and because they help us see patterns in different things that happen around campus, which I wanted to draw attention to.”

Dr. Ketchum also pointed out that before the pandemic, “you had groups that had been meeting in person and organizing events, but when the pandemic happened and we moved online, it became harder for new students and new faculty and staff to know about what clubs are on campus, what organizations to join.” She felt that this had reduced the amount of student, faculty, and staff organizing on campus, and wanted to help people learn about the different opportunities on campus. With this in mind, there is a section of the online exhibit dedicated to outlining the LGBTQIA2S+ clubs, organizations, and student groups at McGill, allowing students, faculty, and staff to see what opportunities are available.

When asked what impact she hoped the exhibit would have on those who visit it, Dr. Ketchum said that she felt it was important that it was on the main floor of the library; “it means people who don’t plan to visit it can see the materials and say ‘wow, I had no idea that Gerts Bar was named after Gertrude Stein,’” which means that, even if for a short time, “they interact with these histories.” Dr. Ketchum also emphasized the importance of learning about the histories, especially with ongoing occurrences of homophobia and transphobia on campus. She explained that “it’s really easy to take for granted certain gains or rights that have been won, but we have to remember how hard folks had to fight for those things,” emphasizing the importance of showing all the important activist work that took place at McGill.

In the exhibit, the materials are organized around five themes: Queer Joy; Student, Faculty, and Staff LGBTQIA2S+ Organizations and Clubs; Discrimination and Backlash; Academic Programs; and HIV/AIDS and Health. The Daily asked Dr. Ketchum why she chose these categories, and she explained that “it is really important to focus on the bad things that happened, and we can’t erase those histories, but I didn’t want it to be trauma-based, I didn’t want it to only focus on negativity.” She also said that she “didn’t want it to be just in terms of resilience, because resilience is something that sometimes you’re just forced into.” Dr. Ketchum explained that she felt that at times, when telling stories about marginalized communities, it can often be framed in what Eve Tuck, a scholar in Indigenous Studies, calls “Damage Centred Research.” Yet she expressed that it is equally important to look at joy and celebration, because “things aren’t unimportant because they’re fun,” which is why the exhibit features  Queer Joy as one of the central themes.

Dr. Ketchum also hopes to draw attention to the resources that the Archives Gaies du Quebec and the Archives Lesbiennes du Quebec (ALQ) have, which is why the exhibit contains a poster about where all the materials for the exhibit were found. She explains that when she was a student at McGill, it was hard to find information on the ALQ, and so she wanted to make it more accessible to students, both to find resources and deposit materials in the archives themselves. Dr. Ketchum also hopes that having the vernissage in the McGill Archives, which she found daunting during her own experience as a student, “makes it feel a little less scary, too,” as part of her goal of trying to “break down barriers of things that can feel intimidating.”

“As we’re seeing a rise in discrimination against queer people, especially against trans people, in the US and Canada, I think it’s important to show all the important activist work that’s been done,” explained Dr. Ketchum.

The digital exhibit  will remain accessible after the physical exhibit ends in December, until at least September 1, 2032. It can be accessed at lgbtqactivismatmcgill.com.