Maktaba Bookshop: “An Extension of Home”

An interview with Sundus Abdul Hadi, founder of Maktaba Bookshop 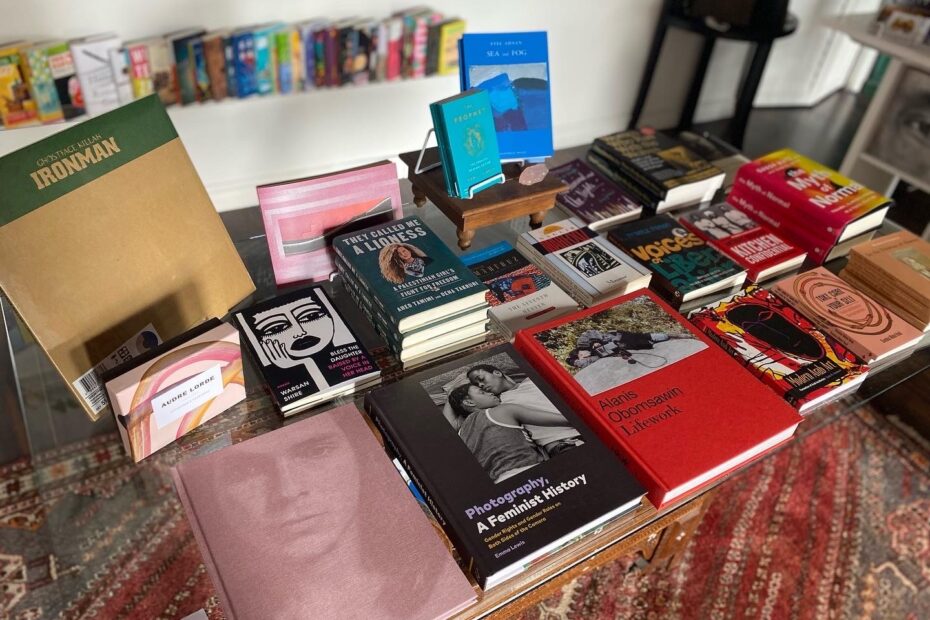 On Wednesday, I made my way to 165 Saint-Paul Ouest, where Maktaba Bookshop is located. After struggling to find parking in the heart of Old Port, I sat down with Sundus Abdul Hadi, an artist and the founder of the bookshop, to talk about the space and the role it plays in the community. The bookshop opened this June, and it serves as an alternative to traditional bookstores and large retailers.

Yehia for The McGill Daily (MD): How did you become the owner of Maktaba? What did your path look like?

Sundus Abdul Hadi (SAH): Well, I am an artist and a writer. I put out two books during the pandemic. I entered the world of books as a writer and as a person who is connected to a really beautiful community of writers, readers, and artists. With Maktaba, the idea started with the question: what does it mean to create a space for us? A space for not just me, Sundus, the artist and the writer, but my greater community. Whether it’s the community of people in Montreal who have been seeking a space where they feel represented, whether as Arabs or as deeply rooted people who want to have a cultural experience rather than just a commercial one. I always say that even though Maktaba is a business, it is first and foremost an art project and a space – a cultural space.

MD: Can you tell me a little bit about the boutique in general and about this new merch drop?

SAH: The boutique is my husband’s brainchild. Yassin has been making merch for 15 years. Each T-shirt he makes is a conversation-starter. So we wanted to approach the Maktaba boutique the same way. We wanted to make wearable messages. And with the General Federation of International Women, I felt like we were at a time when we just wanted to be able to show as much solidarity as possible with what’s happening, especially in Iran, but also across cultures where there’s this beautiful show of strength and solidarity for women. That was the approach. The original image behind the drop is from a vinyl record that was gifted to us by the General Federation of Iraqi Women. And we always saw it as a T-shirt. We knew we wanted to do something with it in this way.

We’ve been doing drop chapters. So when we first opened, it was chapter one: Medium of the Message. And the second chapter was Love Language. And the third chapter is the General Federation of International Women. They provide different ways for us to express ourselves and express what Maktaba stands for.

MD: I wanted to ask you about the book selections. There are specific categories and specific books. Are you the one who picks the books that get showcased?

SAH: Yeah, it was kind of like me channelling my creativity. My creativity came out in how to curate the book selection or how to select it and put it together and how to create a journey for people browsing. So the categories are nontraditional. And so the titles themselves are like food for thought.

I like people to start from right to left. Everything is Political, and that moves us into Black Power, Theory and Thoughts, Palestine, and then Edward Said. The second layer is books about Self Care, Community Care, Self Knowledge, Creative Self, Ancestral Knowledge, and Perspective Shift. So I think the top layer is a lot more political and a lot more theoretical, like the brain. And then the second one is very much about the self, your roots, your ancestry, your body. And then the third one goes into our planet: Indigenous Futures, Magical Realism, Deeply Rooted Fiction, and Octavia’s World.

Our Planet and Indigenous Futures are a continuation of the Perspective Shift and Community Care. And then we get into the Deeply Rooted fiction and the books that I’m also very passionate about, which are books that really expand your imagination, that are written by people from what I call deeply rooted communities. So everything from SWANA (Southwest Asian/North African), Indigenous, and Black communities as far and wide as you can imagine that have ancient cultures. And then the last row covers femme and queer writers. On our table, we have featured books. We have some art and design books and poetry, and we also have books about music and vinyl.

MD: You have a section in the bookstore devoted to Edward Said. What does he mean to you and to the Maktaba?

SAH: If not for Edward Said, Maktaba wouldn’t exist. He’s an OG. He paved the path. He inspired our generation. He inspired me and Yassin. His work impacted our work, the way we see the world, the kind of lens through which we view representation, and the significance of that word.

Because I’m a media studies graduate, and so is Yassin, we’ve always approached the consumption and the proliferation of information and media from an observer’s place. So instead of just taking and consuming the information, cultural theorists like Edward Said basically allow you to take an observer’s position and think about things in a much more complex way. By doing that, it actually simplifies things so much more because you start to see the bigger picture.

MD: We are now sitting in the majlis. Why do you have this space? Why is Maktaba Bookshop not just a bookstore?

SAH:  I guess the majlis for me was a really important space to have for many reasons. First of all, it feels like an extension of home for me. It’s something that makes you immediately want to just get cozy, take off your shoes, and sit down. When your seat is very low and close to the ground, I feel like it opens you up in a different way. It just relaxes you. It encourages conversations that are very down-to-earth. There’s no pretence about it. That’s number one. Number two: this space is amazing because it can get activated in so many different ways. We have a space to project on the wall for screenings. We’ve had poetry readings here. We’ve had different kinds of gatherings of minds and people. We’re planning a program for the fall and the winter that’s going to just activate the space even more on a regular basis. We have different kinds of workshops planned here. All kinds of different reasons to get people into the space, to connect on different levels.

On a good day, when it’s quiet in the shop, it’s the best place to disconnect from the hustle and the bustle in the city and the routine of your day and just come in here with some reading material.
It’s really calming.

MD: You mentioned earlier that you thought there was a need for this space. Can you elaborate on that?

SAH: I can only speak for myself. As a lover of books and reading, I always struggle to find spaces for books other than, of course, the amazing independent bookshops in Montreal, which for me are the best. And there isn’t a lot here, by the way. We have very few independent bookshops. So when we opened, we received really warm support from other independent bookshops in Montreal, which for me was the best feeling. And it reiterated how humble bookselling is as a business. But, yeah, what were my choices? Either ordering off Amazon, which I had almost completely stopped doing more than two or three years ago, or going to places like Indigo. Indigo’s founder is also the founder of a charity organisation called Loan Soldiers, where they donate a portion of their proceeds every year to buying books for IDF soldiers. Yeah, I don’t want to donate to
that cause.

So you’re kind of  stuck in a situation where you want to find your materials and your books and your resources, but you’re limited when it comes to where to get them from. When I decided to open Maktaba, I spent my book royalty money on buying books for the bookshop. I won’t take funding from just anybody.

MD: Personally, I didn’t know I needed a place like Maktaba until it existed.

SAH: Yassin and I always say that, actually, if we had had a place like Maktaba when we were in university, we would have had such a completely different experience. We spent our whole time at university on the sidelines, on the margins, creating our own spaces or having these very insular experiences. So if we had had a place like Maktaba, I wonder what a different experience that would have been. It’s a real privilege for me to be able to offer that to a new generation of young Arabs in Montreal, whether they are at university or not. It’s just been so beautiful seeing people come in here and say exactly what you just said. I didn’t know I needed a place like this.