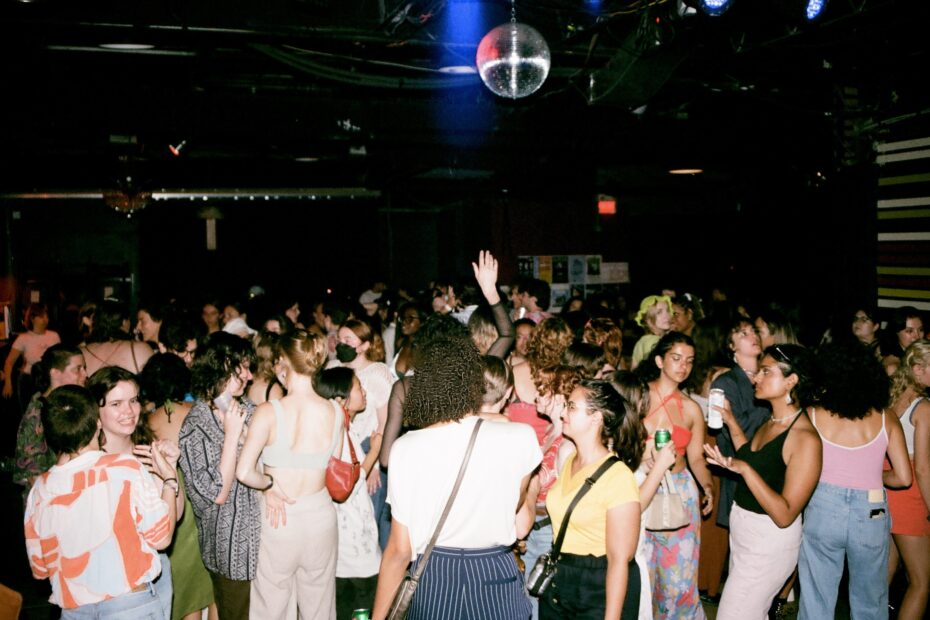 This week, the Daily sat down with Eloise Haliburton and Lucia Winter, the producer and co-founder of ElleLui, a Montreal-based lesbian/queer production collective. We discussed the importance of safe queer spaces and how these spaces are made.

The McGill Daily (MD): Could you tell me a little bit about what ElleLui is?

Eloise  Haliburton (EH): ElleLui is a fairly young community-oriented organization. We think of ourselves as community organizers. Lucia [Winter] and Taylor [Douglas] started it a little over a year ago. Especially given the context of the pandemic, they found that though there are other lesbian and sapphic oriented organisations in Montreal, a lot of them were still not running events. So they were like, “instead of having a little party with my friends in my living room, let’s find somewhere that we could have a few more people together.” It’s gotten a lot bigger now, but I think the mission remains the same. We want to be a space that is welcoming to everyone who identifies with the lesbian or sapphic experience or the queer experience. There’s so many different labels, but just a space to create and foster community, which is often not as available to people who aren’t cis, gay, and male.

For a whole bunch of different reasons, traditionally, a lot of queer spaces are not too oriented towards people who are not what Lucia, Taylor, Ray (Resvick), and myself are. I’m on the project because I wanted to work with that mission, and Lucia and Taylor started it because they wanted to help create a space like that.

MD: Could you talk to me a little bit more about how one does find non-cis male spaces that are still queer – both from an organizer perspective and as an individual looking for these spaces?

EH: It’s definitely challenging. I think one thing that has been really valuable in connecting with new people is other organizers, for example, QueerMTL. They’ve been very deliberate about resharing our stuff, which allows us to connect with people who may be looking for queer spaces but who don’t know exactly how to start finding lesbian and sapphic spaces.

My main source of queer community was roommates, partners, and lesbian meme accounts. I think there’s a lot of value in the digital queer community, especially for people who are closeted or who live in more rural areas where their queer community is not immediately around them. So, for me, when ElleLui started their events, that was probably the first in-person queer event I had gone to in Montreal in a really long time. But for us as organizers, I think there’s a lot of time and energy that Lucia and Taylor put into building relationships with different venue organizers so that we can have those conversations on the importance of a space for us. Because I think a lot of people get that it’s important to have queer spaces, but the kind of details and minutiae of what a safe queer space actually looks like is something that can only be developed and created when you have an organizer or owner who’s willing to listen to you about those details. Part of it is looking at spaces that have already been used by other organizers and part of it is building relationships to find new people. But Lucia can speak more to that.

Lucia Winter (LW): A lot of the venues that we started off working with were spaces that had never hosted queer events before. It was definitely an effort to get venue owners to really understand the intricacies of what queer and specifically lesbian spaces look like – and should look like – in terms of accessibility and safety and conscientiousness towards different genders and different sexualities, and what that means in practice in a venue. Like Eloise said, we have worked with places that other organizers have worked with, but we’ve also forged a lot of our own connections, which I think makes this a little bit special in the sense that Taylor’s and my idea going into this was that we wanted more mainstream, visible, full-of-lesbian spaces. We’d be taking over spaces that were for everyone and making them specifically lesbian.

MD: What does a safe, positive, queer, sapphic space look like? What would the test be for a venue?

LW: I don’t think there’s any litmus test, necessarily. But to be honest, a lot of the relationships that we’ve forged with owners have mostly been – this sounds awful – vibe-based. We’ve had venues where they’ve, for example, charged people for water, and we’re like, “that’s not something that we do at our events and water should be free.” That’s just something that we believe. And they either go “oh, okay, I hadn’t considered that. We’ll give free water,” or they go “no.” For me, if we get too many of those types of “nos,” then it’s not worth it. Because people expect a certain standard in terms of accessibility from event series that call themselves queer safe spaces. And free water just happens to be one of them. Gender-affirming security is one of them, gender-affirming bartenders, et cetera. So it’s not really one thing.

EH: I think also having the ability when we’re working with venues, to say “okay, this is the space that you’ve created, and for this night while we’re running our event here, we need to be able to do things the way that it’s important to us.” Thinking about one relationship that we had recently, we got to a point where we were able to have a conversation with the people working at the door to say, “hey, look, we need you to be on our side.” It’s important for the people who are working there to be able to say, “hey, I get that you like this venue, I get that you come here other times. But tonight we need you to understand that this is a space for people who are allies or who are within this community.” And it’s interesting. I have had a lot of conversations with people who don’t seem to be part of our community and maybe people who think our community is “super fun” – and, no, this isn’t a fun, hot, sexy, for-your-eyes lesbian party. This is a space that is important to protect. It’s not to say that people who aren’t lesbian, sapphic, or queer can’t be in the spaces. It’s about knowing that people who are in our spaces, regardless of gender and regardless of the labels that they put on sexuality, can understand the need for these spaces.

MD: You mentioned that you usually take spaces that aren’t necessarily queer and transform them for your events. Why is it that you take these normally non-queer spaces and use them for queer events? Or is it out of necessity?

LW: It’s mostly out of sheer desire to go to a queer space at a club or bar that I think is really cool that isn’t necessarily queer. That’s not to say that there aren’t already amazing queer-owned spaces that are very affirming that we work with quite often. But there is something very lovely about working with a venue that perhaps hasn’t done a queer event before, who then works with us and realizes, “oh, this is a community that our venue hasn’t catered towards and we can.” And you start seeing them putting on more queer events that have nothing to do with us, and that is lovely to see. It’s a very real footprint that I think that queer events can put on mainstream spaces.

MD: Why is there a need for physical spaces versus virtual spaces for people to gather?

EH: I think everyone’s journey to figuring out who they are – cis, trans, queer, straight, whatever it is – is complicated. You need to have experiences with people you can see yourself in to understand that. For me, it was a whole journey, but being able to be in spaces of queer attraction and queer expression is pivotal to building confidence and understanding who you are. There was one event where someone came up to me, I was working at the door, and was like, “can I ask you something? This is my first time here; my friends just heard about it and they said we should go. But I didn’t know until tonight that maybe I was into women. It’s literally being here that I realized, what do I do?” And that’s what this is about: having spaces where people can be queer, grow in their queerness, express their queerness in ways that maybe they didn’t know they wanted to before, or in ways that they don’t feel like they could in other spaces. That’s what this is about to me.

LW: Causing sapphic panic. I love that. That was cute.

EH: And by the way, if that person ever reads this, I think about you. Yeah, I hope you’re doing well.

MD: So what is it like to exist as an independent collective, and how do you interact with other queer groups around Montreal?

LW: I think one of our priorities is collaborating with people whose visions and missions align with ours. And we’ve collabed with event series like Sweet Like Honey MTL, which do events for BIPOC queer people and lesbian/sapphic people, and Blush Party, who have been around since 2019. And we’ve collabed with a graphic design studio that’s queer-run. We are collaborating with a classical music collective. We are using whatever influence we have to branch out and help other series or just have fun with them. We’re independent from any established institution, but I would say that part of our success has been the fact that the queer community of Montreal is very interdependent and very interconnected. Part of working with other groups, other event series, other initiatives, is affirming one another. We strengthen each other. And I think that’s the only way to create a healthy community. We are all friends now, we all go to each other’s events, we all support each other, and that’s really important. We all throw fun events together and do something good. That feels really good.

MD: I see that ElleLui has grown fairly quickly. How do you see this collective growing in the future?

LW: I can tell you my dream, which is to put on festivals for queer people. I think that if I were to make ElleLui my full time job, which as of now is not possible, I would do that. But my dream is to put on a sapphic festival with sapphic artists and singers and get sponsorships to do that. In the meantime, it’s really a matter of continuing to create fun events that people go to until we can get to a point of influence where that would be possible.

MD: Finally, how can people get involved?

LW: We have an artist call-out form on our website where artists can upload their materials and we can take a look to see if we can work with them. We also have a volunteer sign-up form, and we have an event idea pitch form if people have an idea to put on an event.

EH: We have way too many events going on. But in January, I think we’ll definitely pull some ideas from there and reach out to people if we end up using anything. You can always hit us up on Instagram @elleluimtl and send us your material. We have an open mic night once a month, more or less, and that’s a great place for people to come out, share their stuff with the community – and we have hired people from that before. Or you can email us at info@elleluimtl.com.