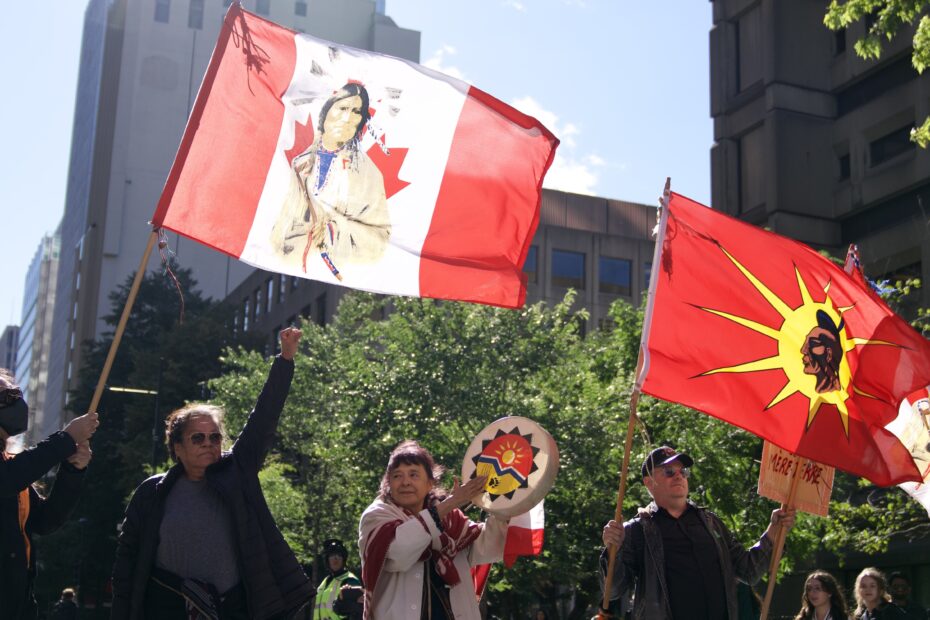 Interviews conducted with the help of Titouan Le Ster

September 23 marked another Friday of international mobilization for global climate action, as part of the The Fridays for Future youth movement. Thousands of  protesters took the streets in a united call for climate and social reparations in over 450 locations across the world, including in Montreal.

This strike took place six weeks before COP27, and two weeks before Quebec’s general election. The protest is emblematic of the high stakes faced by political parties. Whereas Benoit Charette and CAQ representatives were escorted by the police to leave the march after being booed, some parties were absent, and others were actively engaging with their supporters. In a conversation with the Daily, Green Party leader Alex Tyrrel affirmed the need for drastic changes in government policies: “we have a government that is making long-term environmental sacrifices for some short-term economic gains. This shows a lack of consideration for the future, for young people, for the protection of biodiversity and for the fight against global warming.” He further emphasized the political urgency that led his party to develop an extensive agenda for social and political justice, expressing that “we must take systemic actions and implement societal changes through the initiative of the government. People are more likely to take individual actions if they know it is a group effort.”

Marie-Eve Leclerc, the mobilization manager at Equiterre, was also at the strike. Equiterre is a non-governmental organization that seeks to motivate citizens, organizations and governments to take action towards an ecological transition. Leclerc agreed on this need for political change: “climate change is happening now and it affects our daily lives, our health, our safety, and the economy as well, with all of the climatic disasters that will befall us. Vote for politicians and political parties who care about the environment and who will address the climate crisis in an ambitious, serious way.” Moreover, she highlighted the importance of political participation, and the role that Equiterre plays in this global cause: “we are asking the government to reduce greenhouse gas emissions and to adapt Quebec to climate change now, because we cannot stop it, but we can slow down the pace. There are 48 proposals on seven different subjects that our Green Coalition suggests and sends to politicians.”

For Shirley Barnea, CEGEP student and part of Pour le Futur Montreal, the climate urgency is strongly intertwined with social justice. The most pressing demands behind these movements are a mandate to end fossil fuel emissions by 2030 in Quebec and a wealth tax to invest in a social safety net. She explained how those measures show the proximity between social and climate justice: “First, a lot of the oppression that many people are facing is caused by the same kind of mindset that’s causing the destruction of nature. For example, the mindset of domination – just like during colonialism. Then, wealthy countries are the ones that are greatly responsible for climate change. The global north has historically emitted 92 percent of global greenhouse gas emissions, but the global south is suffering 90 per cent of the effect. That’s an injustice.” As the march began, she stressed the social nature of the movement by asking all present political parties to remain at the end of the group.

Leading the way were an Innu family, coming all the way from the Matimekush-Lac John community to denounce the effect of climate change on their community, and the consequences of pollution on their lakes. In the front were students and young adults. Most shared a common dissatisfaction with the lack of initiative from the government and from big corporations. But, what brought them to the streets was also a strong hope in the future and the belief that individual actions matter: “I think we will be able to change things through protests and the mass effect, by putting pressure on the government and showing that the majority of people want political change,” said Alexia, a CEGEP biology teacher. Mathilde and Chloé, two CEGEP students, also decided to skip class and come to the strike to demonstrate their will to take action, for the current and for future generations. Despite being 17 years old, they emphasized the importance of going to the polls on October 3: “I think it’s good for eligible voters to go and vote intelligently for people who will take this matter in hand and consider the environment.” McGill students were also strongly present. The Daily met Aglae, a student in environmental science, who encouraged McGill University to further diversify its investments in environmental-friendly causes, while us students should ensure that we act as we can at our level. “I think this strike is important to show how we can act and that we can act for the climate,” she said.