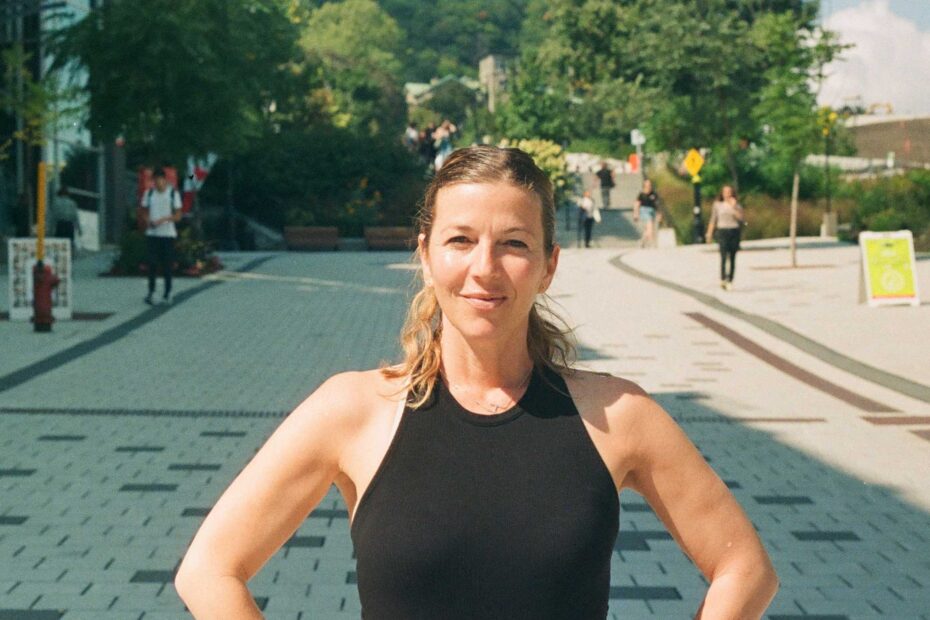 Self-described as “built for service,” former Montreal Gazette columnist and founder of the Montreal-based YouTube chef series Beyond the Plate, Heidi Small is looking to represent the Westmount-Saint-Louis riding as a member of Bloc Montreal in the National Assembly.

The Daily sat down with Small to discuss her career in food, her involvement with the local community, the language debate, and anglophone rights.

This interview has been condensed and edited for clarity. It is not an endorsement on behalf of the Daily.

The McGill Daily (MD): What was the genesis of your political career?

Heidi Small (HS): I have been thinking about this a lot. The best answer I can come up with is that I’m an accidental politician. I would never have imagined that there was a title for my passion. But my passion is so strong and I’m such an advocate – whether for my children, for myself.

I first met Balarama Holness by complete coincidence at an event; we became friends and I heard his story. I [was] starting to fear for my life with all the crazy politics that are happening with Bill 96 – everything that comes with the language laws, our democracy, everything at risk. So I said to him: “I’m going to help you, Balarama. You are going to make a difference.” He also met with me a few times for coffee and I was introduced to some key figures in the community. All of a sudden he looks at me and says: “You’re the one that needs to be running here. You are a representation of Montreal in all its finest moments. Run with me.” And I was like: “Run where?” I didn’t even know what the language was with a campaign and a race. He said to me: “Just run in my campaign; I’ll explain it to you. Your riding is Westmount, you are a born leader. You’ve lived in Westmount for over 23 years, everybody knows you, you are so community-minded – do it.”

MD: Balarama said that you were “community-minded.” Was that in reference to your show Beyond the Plate where you provide a platform to local chefs in Montreal?

HS: Absolutely. Your DNA – who you are, the cloth that you’ve been cut from – identifies and tells you the direction that you need to be going in. So I learned who I was and the cloth that I was cut from when I was starting to raise money on behalf of my late father for brain cancer. So I’m like: “I’ve got something here, people listen to me, and I can create change.” Even though the problem of cancer is so enormous, I brought it back to a place of “what can I do today?” I can’t think about tomorrow and the next day. It’s just: “Heidi, what can you raise for today?” That’s my kind of mentality: day by day, making a small mark on the community.

I completely changed my life and my career after my father passed away because I saw the beauty and the sadness of how fragile your life is. I was ready for a change. After losing my father, I thought, “You’ve got to make it count this next round.” So I called up the Montreal Gazette and I found out the right emails and I put a pitch together because I wanted to highlight Montreal chefs and tell their stories. It was not about critiquing and breaking them down; it was about uplifting them in a shining light.

I’m almost built for service, which is what you need to be when you’re a politician. When you’re a politician, you have to have a burning desire to do better for others at all times. The chef platform was beautiful to do that. I can go and just shine a light on the beautiful chef community. So it was all there. All I had to do was slap on a new label, calling myself an active politician. But really, I look at myself like a very passionate person who cares.

But the most important part of our city is that we have many languages and we have people coming from all over to start here. We have immigrants coming here. We would have no culture, no food, nowhere to eat if it wasn’t for that beautiful diversity that makes this metropolis and culinary epicentre. I want to continuously break barriers and bring people together, whether it is to hear different languages, to hear about different cultures, or to, of course, eat different food.

HS: Well, I come from a very traditional Jewish home and I went to a Jewish school where I learned four languages: French, English, Hebrew, and Yiddish. So I’m all about the sacrifices from parents who want to keep educating their kids about where they come from and who they are as a person. I want everyone who comes here to feel safe, and I want them to feel welcome because they will be, ultimately, the tapestry that makes this city so diverse and beautiful.

MD: In what ways does your desire to prevent newcomers from feeling alienated relate to laws like Bill 96 and Bill 21?

HS: When somebody is cut from the wrong cloth and they feel a sense of insecurity, they’re always shaky, they’re broken inside, and they’re always looking for a way to bring people down. I can’t help but wonder, who is Legault speaking to? Is he speaking to a fragmented, broken, insecure group? To me, when you are proud, when you’re a proud Montrealer or you’re a proud Quebecois(e), it will never matter what language you speak. So it pains me that he’s breeding this sense of insecurity when Montrealers play beautifully together. We know how to speak and communicate.

In the end, it isn’t about being perfectly bilingual; it’s about being a good human and being secure within yourself. So it really hurts that he’s fueling this fire of insecurity about the “mother language” when it doesn’t exist amongst the people who are walking the streets every day. We all get along; we all play nice.

MD: On your Instagram, you said that Bloc Montreal is “the Liberal Party done right.” Could you expand on what you meant by that, knowing that the Liberal Party has historically been a popular representative of Anglo communities?

HS: The new English leadership that has sprouted is actually because the English population does not feel protected by the Liberal Party. In many ways they feel that their leadership fell asleep on the job and let these bills pass in the night.

So Balarama said, I am a Liberal, but I’m not doing it the way they are doing it. I’m going to have to go out there and build my own platform, my own party, that speaks to a generation and a community that no longer identifies with its leadership.

HS: When you’re a David and Goliath-type movement, you have to start somewhere. Would Balarama wish to have representation off the island of Montreal? Absolutely. But he chose strategically. And it’s like, do you spread yourself thin and get very little results? Or do you put yourself in a very dense English population and play those odds? And I feel as though he did a great job at centering himself and not spreading himself too thin and choosing very specific people to run in the race and win.

MD: Bloc Montreal has advocated for policies that would make Montreal more autonomous. What is the importance of the policy on your platform stating that 20 per cent of the Quebec Sales Tax generated in Montreal should be redirected to the municipal government?

HS: Small businesses are unique. The coffee shops, the bagel shops – all of these gorgeous businesses took such a hit during the pandemic. We are coming out of extraordinary times. It’s hard enough just to have survived the pandemic. On top of that, now, just as people are finding their last breath, they have to face new regulations, new fears. Holding on to those percentages of those taxes to give back to the community – back to small business – is what will, I think, resuscitate everybody coming out of the pandemic.

MD: A lot of young people can be very cynical not only about politicians but about voting in general. What would you say to people who would be hesitant to vote for a small party like yours versus any other party that might be older or bigger?

Then I would say, because there’s so much noise out there with everybody fighting for what seemingly feels like the same thing – English [language] rights. I would say, do your homework and go out and try and investigate further who these people are in your riding. Don’t get overwhelmed by chasing a party. Go and chase candidates and hear them and see what they have to say because it will just come down to who resonates with you. It comes down to a feeling. And I truly believe that in this election and in my riding, it will just come down to who you feel comforted by. Who speaks and resonates with your voice? That’s all. It’s going to come down to who speaks on your behalf with the loudest voice, with the most coherent plan, and – like a bulldog in the ring – who is going to get hold of that bone and not let go.