The Cost of Montreal’s Tech Hub

Gentrification in Mile End is pushing local business out. 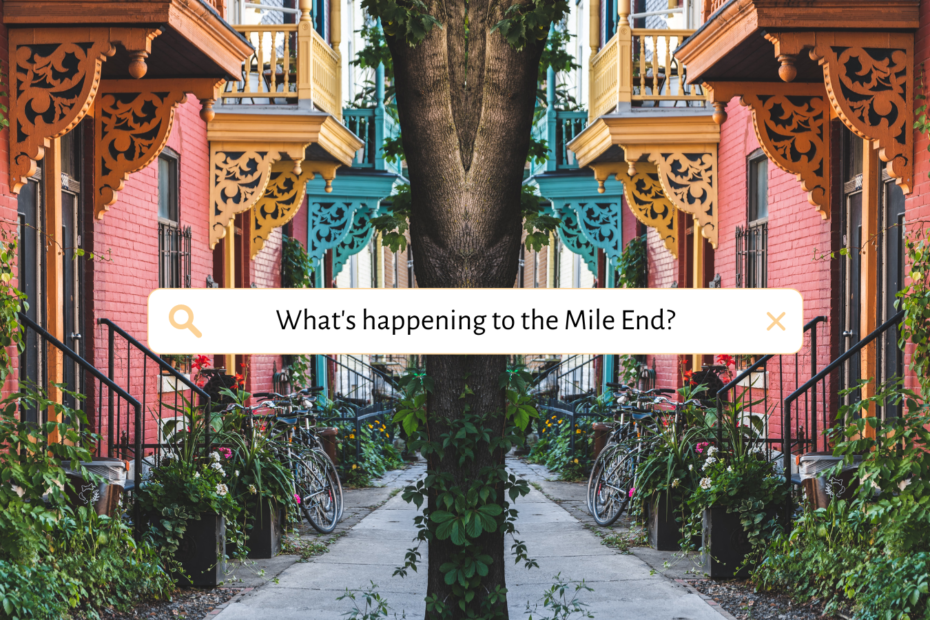 If you’ve been living in Montreal for a while, you’ve probably heard the term gentrification thrown around. It’s because of gentrification that luxury condominiums have been opening, and that a Lululemon has opened across from the esteemed St. Viateur Bagel. Gentrification is a sign that neighbourhoods and their inhabitants are changing. It entails an urban renewal in which a neighbourhood develops rapidly, changing from low to high value.

During the 1960s and 1970s, Mile End was known for its garment industry and for being home to immigrants of Jewish, Greek, Irish, Portuguese and other backgrounds. Then, due to the collapse of the manufacturing industry in North America, many of the garment factories closed in the mid-1990s. After this came a key step in the gentrification process – the arrival of artists. The 1990s brought in artists such as Arcade Fire, Grimes, Ariane Moffatt, and many more who were attracted by the low rent for apartment and studio space in the area.

Soon after, Ubisoft, a French video game company, opened its Montreal subsidiary in a former factory. From 1997 onward, Ubisoft Montreal brought an influx of 3,000 new tech employees, an indication that the Mile End inhabitants were changing. There was active encouragement from the government at both the federal and the local level to encourage tech companies to situate themselves in Canada and Montreal. In fact, political lobbyist Sylvain Vaugeois sensed the business opportunity that the multimedia industry might bring and devised a plan to provide tax credits to large video game companies willing to establish officesin Montreal. This incentive involved both a federal and local government investment of up to $25,000 in subsidies per employee for 500 Ubisoft employees over five years. Soon after, Quebec established a new tax credit to be applied to other companies as well to cover a maximum of 37.5 per cent of eligible labor expenditure if a multimedia title is available in French and up to 30 per cent if a title is not.

Critics have often argued that the tax credits the government has provided are mainly beneficial for foreign corporations and that they hurt local tech companies. They find the tax credit allows mainly video game companies to offer workers more money and draws talent away from other tech companies.

With the low operational costs, government incentives attracted companies like Microsoft and smaller organizations like Thales, which began to move into the neighbourhood. Soon after, condo companies, restaurants, and new boutiques opened up to house, feed, and dress the growing new tech inhabitants and their higher incomes. Real estate firm Shiller Lavy has been notorious for buying commercial buildings and raising their rent. They have bought over seven buildings on St-Viateur Street, including Le Cagibi, a famous vegetarian cafe-indie showbar that was forced out of Mile End and into Little Italy due to rent increases and has since closed permanently. Local businesses and their patrons in the Mile End are not too pleased with the recent changes that the neighborhood has been experiencing. In particular, Mile End Mission, a neighborhood charity, noted its difficulty in serving the most vulnerable in the rapidly gentrifying area. They indicated that they used to serve about 20 people per week and now see nearly 300.

More than 20 years after the first video game company set up in Mile End, Montreal has been listed number 15 on CBRE’s 2022 Tech Talent Rankings. Montreal International estimates there are now about 200 video game studios and 15,000 industry workers in the city. The effect of this gaming hub has affected many parts of the city as well. Local universities have opened new programs focusing on game development and technology. For example, Concordia University has an official partnership with Ubisoft to provide a course on game design.

While the growing number of tech companies choosing to locate themselves in Montreal has created a boom in jobs and placed the city on a global map of the tech world, it does come with the cost of smaller local businesses in the city. The government needs to further support local businesses to ensure that the Mile End that has attracted so many tech residents maintains its historical and cultural significance.