“It’s Not Welcome on My Land” 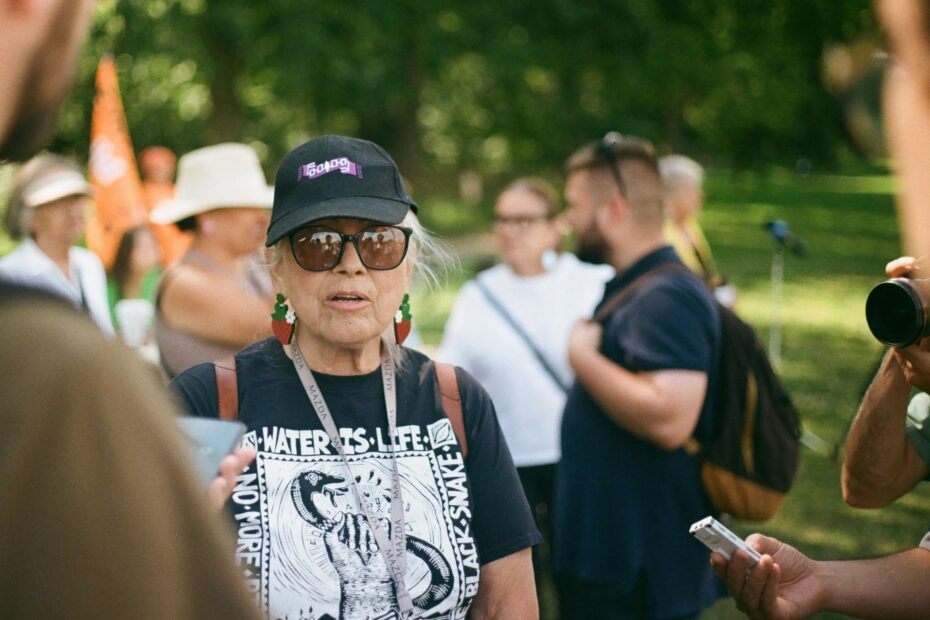 “The Pope Must Leave and Take the Cross With Him”

In late July, Pope Francis issued a landmark apology to Indigenous peoples across so-called Canada, praying for “God’s forgiveness, healing and reconciliation” for the role the Roman Catholic Church played in the Canadian residential school system. He has described his visit to Canada as a “penitential” journey. The Pope expressed how the Church’s contribution to the projects of cultural destruction and forced assimilation of Indigenous peoples culminated in a “disastrous error, incompatible with the Gospel of Jesus Christ.”

The Pope’s apology and his visit to Canada attracted scathing condemnation from Montreal’s Mohawk Mothers, who argued that the Vatican’s expression of regret does nothing for Indigenous groups in the absence of restorative action. The Kanien’kehà:ka Kahnistensera, the Mohawk Mothers, issued a statement during a press conference held shortly after the Pope’s apology demanding the pontiff to leave Indigenous land. “[The Pope] could make an apology, but what does that do? When was the last time any of you sat down with a murderer, rapist, thief […] so that [they] could say sorry to you? That’s the entity that [the Pope] represents,” said Kweiito, a Kahnawake resident and spokesperson for the Mohawk Mothers. “Every time [the Pope] come[s], it hurts our people more and more to think […] that the entity he represents is here.” Kweiito continued to articulate that the “emptiness” of the pontiff’s apology was due largely to the inability of the Vatican to pair it with the withdrawal of religious ideologies that fuelled the genocide of Indigenous peoples. “The papal bulls that were created that said we were not human, that we were inhuman and just pagans, and that all this land is to be taken – that needs to be rescinded,” she said. “Action is everything. Words are just words.”

In the same sense, the colonial legacy of the Roman Catholic Church is magnified by the existence of public displays of the cross. According to the Mohawk Mothers, the cross on Mount Royal represents a looming reminder of the oppression and painful memories associated with the role of the Church in the genocide of Indigenous peoples. “I understand that there are people that follow that way of life, but as Onkwehonwe people it was forced down our throats,” Kweiito said. The group said that the act of taking down these symbols is an important step in dismantling the intergenerational traumas created by the residential school program. “This cross has to come down. You can relieve some people of the grief and punishment that they endured, not just for the survivors but for the intergenerational trauma that’s happening,” Kweiito said,. “It’s a symbol of them trying to commit genocide on us, and all that follows within […] It’s not welcome on my land.”

The Role of Indigenous Law in the Royal Vic Lawsuit

Suing both McGill University and the Canadian government in March, the Mohawk Mothers have gone to court in an effort to halt the continuation of McGill’s New Vic Project, a renovation plan to redevelop the old Royal Victoria Hospital. The group seeks to stop McGill’s reconstruction efforts until the grounds have been investigated for unmarked graves associated with the “Project MKULTRA” experiments carried out against Indigenous children in the 1960s. These experiments were held by Dr. Donald Ewen Cameron, whose research consisted of “brainwashing” subjects by placing them under a chemically induced sleep in order to administer rounds of hallucinogenic drugs like LSD. The families of those who were experimented on have already filed lawsuits against McGill for the abusive treatment their relatives endured under Dr. Cameron. The Mohawk Mothers think that there may exist additional unmarked graves of the Indigenous children buried under the land on which the Royal Victoria Hospital is situated. The women’s group bases this belief on an interview with Lana Ponting, one of the few remaining survivors of Dr. Ewen Cameron’s experimentation, who alleges that experiments’ victims were buried in the grounds surrounding the Allan Memorial Institute and that underage children were victims of these experiments. The McGill University Health Centre (MUHC) has already acknowledged that Cameron held “controversial” and “unfortunate” experiments at the Allan Memorial Institute, but it has declined to assume responsibility for his actions.

The argument presented by the Mohawk Mothers in favour of halting the New Vic project and overseeing the investigation into the unmarked graves is nested within a larger assertion that Indigenous law should be applied to sovereign Indigenous land. The Mohawk Mothers claim that traditional Indigenous law must act as the legal framework in which the New Vic lawsuit will operate. Written in March, their original motion to the Superior Court of Quebec cites section 35 of the Constitution Act, which recognizes and affirms Aboriginal treaty rights as legal documents whose contents are sourced from Indigenous legal orders. Recognizing that the events that transpired under the medical experimentation of Dr. Cameron took place on sovereign and unceded Indigenous land, the Mohawk Mothers claim that they possess a right for their relationship with the Canadian government in this case to be treated on a nation-to-nation basis. That is, they are willing to participate in the adjudication process of the settler Canadian state in order to reach a collaborative and peaceful resolution regarding the dispute of the New Vic project situated on their sovereign land.

However, the Mohawk Mothers remain wary of taking action within the context of a colonial legal system whose discourse has perpetuated a Eurocentric narrative suppressing the recognition of Indigenous sovereignty. Although their lawsuit is situated within the legal bounds of Canadian law, the Mohawk Mothers have argued for their demands on the basis of Indigenous legal traditions. By citing section 35 of the Constitution to recognize treaties like the Two-Row Wampum, which established terms of mutual co-existence and non-interference between Indigenous peoples and Canada, the Mohawk Mothers derive their rhetoric from an already agreed-upon (but historically ignored) framework for the mutual co-existence of two sovereign entities within the same territory.

The Mohawk Mothers claim guardianship over McGill’s unceded lands lies in the 44th Wampum of the Kaianerehkό:wa (Great Law of Peace), which states that women of the Iroquois Confederacy are the caretakers of the land on behalf of future generations. Kahentinetha, another Kahnawake resident who spoke at the press conference in July, went on to explain the difficulties behind building a claim within a settler legal environment whose foundation lies in Indigenous law. One of these hurdles lies in the opposing parties’ resistance to the Mohawk Mother’s self-representation. “They’re still trying to come up with all kinds of reasons [against] it […] one of them [being] that [the trial] is going to take a long time,” she said. The Mohawk Mothers refuse to use lawyers out of a desire to separate themselves from the colonial system that has historically oppressed Indigenous people. “We spoke on our own behalf. If we take a lawyer, we’re giving up our right to be Onkwehonwe. We cannot give up our birthright,” said Kahentinetha, “We cannot take these lawyers who have taken a vow to the Crown – the ones that carried out the killing of the original people.”

The uphill battle in which the Mothers contend demonstrates how the Canadian legal system uses a revisionist attitude to exclude Indigenous-Canadian treaties and to dismantle the legitimacy of Indigenous legal traditions within Canadian courts. The lack of authority that Indigenous law possesses in the lands that were stolen from Indigenous peoples is an issue that the Pope could have addressed – and something the Mohawk Mothers touched upon during their press conference in July. The Pope’s lack of concrete action, within the context of the legal battle between the Mohawk Mothers and McGill’s New Vic Project, represents a lost opportunity to promote Indigenous self-determination. “[The Pope] needs to write a new plight for the people that follow him and let it be known that this land belongs to the Onkwehonwe children,” Kweiito said. By taking action to endorse the authority of Indigenous law on Indigenous land, the Pope could play a role in supporting the efforts of Indigenous groups like the Mohawk Mothers, who are seeking to validate their grievances through a system of justice that is sovereign to Canada’s. However, despite ostensibly recognizing the cultural genocide committed by Church residential schools, the Pope’s decision to forgo tangible action alongside his apology continues to perpetuate the suppression of Indigenous voices.