The ‘souq’ as a space of liberation and memory 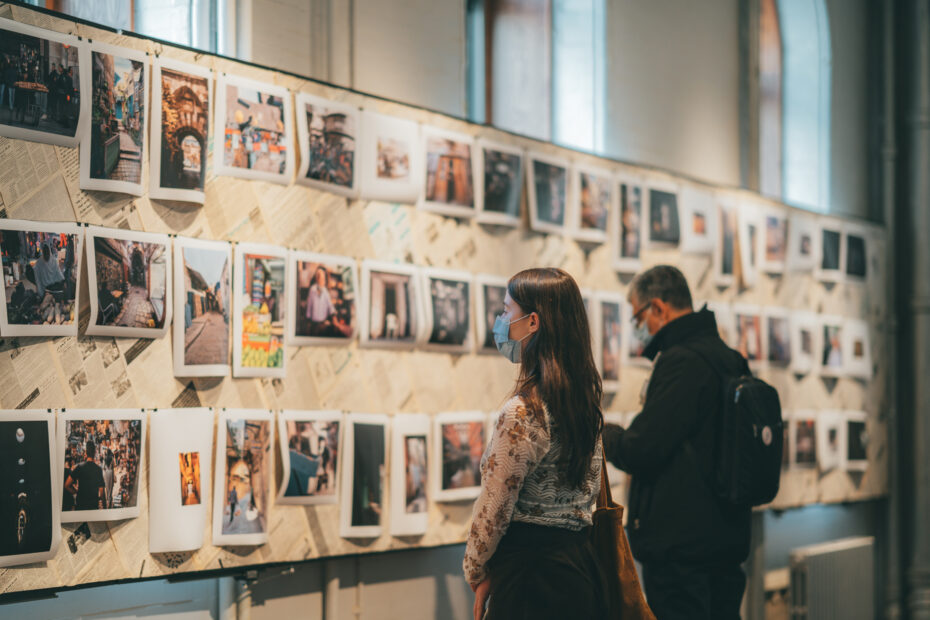 Souq is Arabic for street market. The images capture a moment bursting with life, frozen within the frame. You are not sure where to look first – but then you find yourself staring. Fixated on one of the many photographs taken of Palestinian souqs. The visuals fill the space with colour, life, and memories that transgress national boundaries. The sounds of the marketplace emanating from the walls make you feel as though you should be looking behind you – as though a street vendor was calling at you. The exhibition places you at the center of a Palestinian souq. Scenes are brought to life as you imagine the narrowness of the alleyways and the hardness of the cobblestone street that blend into the darkness of the night sky. The faces in these images are so unfamiliar that you believe that you recognize them as strangers walking by you on the street. One photo captures a boy from Jerusalem pushing a cart of ka’ek al-quds, Jerusalem’s sesame bread. Another shows a  brown cloth bag filled to the brim with vibrant spices. A day turns into night as you walk past the fruit vendor and look into the neighbouring shoe store. You become enclosed within the city walls, within the presence of the locals. A fragment of Palestinian life and land.

On June 24, 2021, a year following the latest war in the Gaza Strip, many demonstrated in front of the Israeli colonial prisons in Acre, Jaffa, and Nazareth in response to arrests made in recent protests. In Hebron and Nablus, many were spurred to protest the Palestinian Authority’s suppression of their freedom. At this time, homes in Silwan, Jerusalem, were being destroyed. Forced displacement threatened the Palestinians in the Sheik Jarrah neighbourhood. On the same day, more than 14 locally active organizations, in coordination with volunteers from the Insaniyyat Association, opened this same exhibition within the old markets of these seven cities.

Here at McGill, there is a glimpse of these forceful acts of activism – a fight against forced displacement and a fight for the need to recognize rights in the past, present, and future. During the keynote presentation on March 29, Professor Helga Tawil-Souri of New York University described this exhibition as reminiscent of going to Damascus for ice cream followed by dinner in Beirut. A memory so vivid and a plan that feels like it is going to take place in the coming week.

Colonialism is today. It is not part of the past. The exhibition reveals the relationship between the visual, displacement, and commons. The markets have been impacted by the attempted erasure of Palestinian identity and ways of life by Israeli colonialism, as Israelis encroach on their lands and forcefully displace families from their homes. The Hebron, Nazareth, Gaza, Jaffa, Acre, Nablus, and Jerusalem markets are distinguished by the character of their roadmaps and laneways. For Nablus, it was the city’s handicraft industries and its traditional Levant crafts, such as carpentry, cotton and woollen textiles that made it famous. The Acre market is characterised by its port, where barters and transactions took place.

The noise that fills the space demonstrates to the viewer that markets themselves are ways of exploring the commons, a centre of social and political life. Commons are defined as places that encapsulate earth and natural resources, institutions, rural and urban spaces, physical products, and knowledge. They are places of public gathering, where hubs and networks are formulated and human interaction is promoted. Commons is the air we all breathe. The photographs demand that we recognize the significance of enclosures, as violence, colonialism and war forces enclosures on Palestinians and appropriates Palestinian lands. The power of photographs surpasses any sentence that could possibly be written about the experiences of the Palestinian people, as Mair Marsha, one of the curators for the exhibit, explained.

Palestinian voices are triumphant. As Professor Tawil-Souri put it, the moment of politics is when possibilities happen. The viewer is confronted with testimonial documents, and the mere existence of these documents is a form of protest. The right to be recognized. An act of unification follows every act of fragmentation, and uprooting is followed by re-rooting. Palestinian identity, narrative, and social encounters are threatened by settler colonialism. But despite this enclosure, there is a tangible heritage that is captured in the exhibition – one that remembers that souqs are spaces of liberation and offers a decolonial perspective to life in Palestine. Palestinian souqs are places of reckoning and reclaiming, and through photographs we see these things happen.