Souq Stories: Interview with the Curators

A conversation with Amir Marshi and Layan Salameh of the ‘Souq Stories: Reclaiming the Commons’ exhibition 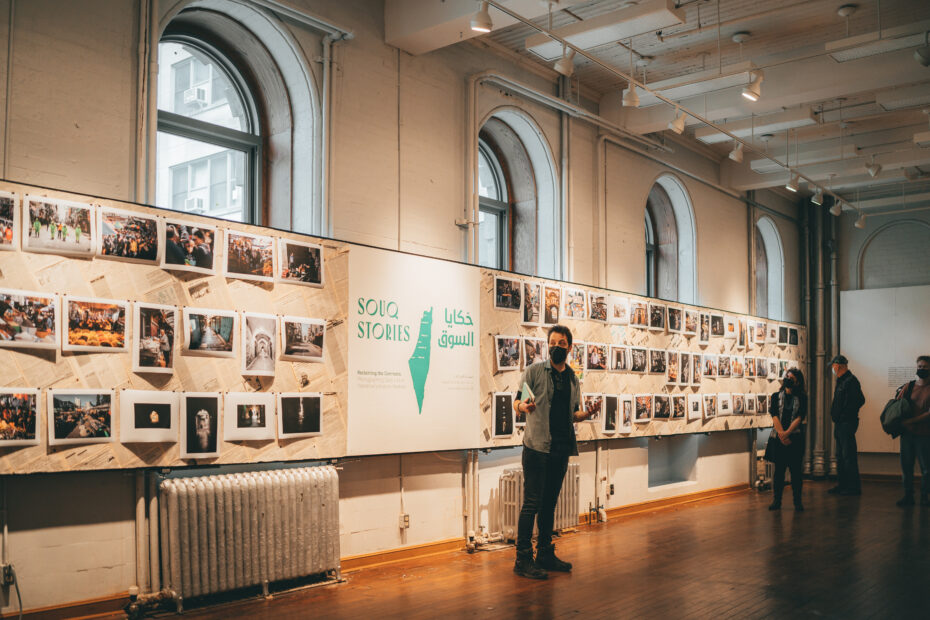 From March 21 to April 7, the Macdonald-Harrington building hosts the Souq Stories: Reclaiming the Commons exhibition. I sat down with curators Amir Marshi and Layan Salameh to talk about the exhibition and Palestinian activism.

Amir, studying at the University of Chicago, is from Nazareth, Palestine. He is the co-founder and coordinator of the project as well as co-founder of the Edward Said Forum for Palestinian students in the social sciences, humanities, and arts.

Layan is an architect from Nazareth, Palestine. She is the co-founder and coordinator of the partner groups and exhibitions at Souq Stories. Layan is doing a master’s in Architecture and Urban Planning.

The following is a short excerpt from a two-hour-long conversation with Amir and Layan.

Yehia for The McGill Daily (MD): What did this exhibition look like in Palestine?

Amir: This exhibition took place last June, and it took place in seven cities for seven days: Nazareth, Nablus, Gaza, Jaffa, Akka, Jerusalem, and Al-Khalil. The idea was to display these photographs in large print within the alleyways of the different souqs. So when you walked in Al-Khalil during those seven days, you would see photographs of the alleyways of Nazareth whereby you are not allowed to go from Al-Khalil to Nazareth. You don’t have the right to do so, according to Israel. So we try to create this common space and time to transcend these borders.

Here [at McGill], it’s very different. The idea is to show the distinct features of each souq but also to display them according to the overarching themes of common space, common time, and common history. We displayed the photographs all together on the wall; the idea here is to show one Palestine. When people look at Palestine, they see one portion of Palestine. We didn’t put the names of the locations. We want them to look at these spaces as first and foremost Palestinian spaces. We wanted to deconstruct and decolonize the way people look at Palestine.

Layan: We wanted the exhibition to be accessible to all people, to whoever comes to the souqs in their daily life. We faced a couple of restrictions. The occupation power restricted our movement, our cultural activities, and our activism. In Jerusalem, we couldn’t install the photographs because the occupation power sees it as threatening to its identity, so we had to print the photos on T-shirts and give them to the merchants so that people could see them in the alleys.

MD: Why did you decide to focus on the souq?

Amir: We saw the souq as an inspiration. The last vestige of Palestinian sovereignty under the occupation. The souq, for us, meant our economic heartbeat, so it was important to revitalize it. We saw it as an opportunity to connect Palestinians because it’s a place that harbours a huge diversity of people.

Layan: It has different levels. For hundreds of years, those souqs were the core of the cities. Cities and towns actually developed around them. With that comes all of the public encounters of different socioeconomic backgrounds. Now, the colonial power sees it as threatening to its identity. In order to maintain a sense of economic superiority, it suppresses those places on every level. The souq carries with it a very long history. My parents and my grandparents used to always tell me: “Oh, we lived there, and next to it there was this souq and we used to buy so and so.” Our project aims to shift the narrative from seeing those places as images of a fragmented space to images of a unified space. So when our parents talk about going from a market in Nablus to a market in Nazareth for commercial exchange, we want to see this as a narrative of connectivity.

MD: Why are there Arabic journals behind the pictures?

Amir: This is a newspaper for the Arab diaspora here in Montreal. I think, for me, it’s part of our long-term aim of connecting with the diaspora. It’s funny because the publisher of the newspaper came here and interviewed us, too. So, in a way, these pictures are going to sort of fade into the background and be part of this space permanently. So, yeah, that’s how you see the merging of the background and the foreground.

Layan: You can also see that many of the articles are talking about uprisings and resistance. This image of old newspapers is no longer accessible by virtue of the ever-expanding virtual world. So we wanted to exhibit those hidden newspapers, hidden stories, hidden knowledge and put it here so that people can see them.

MD: Who are the photographers?

Amir: That’s important because we tried to focus on young, aspiring photographers – even people who do photography as a hobby. We didn’t want to include a lot of professional photographers. We do have some professional photographers; one of them is Mustafa Al-Kharouf, who was born and raised in Jerusalem but doesn’t have any legal documentation. He’s trapped in Jerusalem because if he gets out he would never be able to come back. He’s not allowed to be unified with his family.

Layan:  Souq Stories was a place for [young photographers] to share their work. We connected with them through different social media platforms. We used our pre-existing network and we built on it and expanded it.

MD: What were the main goals of the project?

Amir: There are three goals: the strengthening of Palestinian unity, the revitalization of the national economy, and the empowerment of youth by virtue of connecting them across colonial borders.

Layan: We wanted a project that connects Palestinian youth with their fragmented geography.

MD: Can you talk more about this fragmented geography?

Layan: The movement of Palestinians is heavily restricted. We are given this paper that tells us where we can work and where we can live. Some places are better than others. In Gaza, it’s a total enclosure. It’s extremely difficult to get in or out.  This immense difficulty that Palestinians face when trying to move across different Palestinian cities contributes to the fragmentation.

You also have all these settlements that try to make a discontinuous Palestinian state in all of the West Bank. So it also tries to fragment the West Bank itself into A, B, C areas where, for example, A is for Israelis, B is under the control of the Israeli army, and C is for Palestinian authorities. This process of fragmentation is still ongoing; it happened in 1948 and it’s still happening now.

Both Amir and Layan wanted to stress that this exhibition was a collective effort. Many volunteers, organizations, and youth groups contributed to the project. There are two people that were supposed to come with Amir and Layan to Montreal: Waed Manaf Abbas and Shareef Sirhan.

I contacted Waed, who is the co-cordinator of the curator group and the photography group and is on the general organizing committee for the project. I asked her about the reason she was not able to come to Montreal.

Waed (I translated Waedís response from Arabic to English): I am from Jerusalem. People born in Jerusalem get this thing we call “the blue identity.” It’s not citizenship; it’s more like a permit that gives you the right of residence and the right to work. I have to live in Jerusalem, I have to work in Jerusalem, and I can only visit doctors in Jerusalem. I do have an Israeli social security number and access to Israeli medical care. Since I am not a citizen, travelling becomes complicated: I am considered to be stateless.  Like a lot of other people, if I want to come to Canada I have to go through the process of getting a visa – I can’t just decide to buy a plane ticket and travel. This process can get very complicated. To this day [March 31, 2022], my visa application is still pending. Even if it had gotten accepted in time, I would’ve had to give my fingerprints to an official service centre. The first office they suggested is in Amman, Jordan, which is ridiculous because I am not Jordanian. So I would’ve had to travel to Jordan in order to be able to travel to Canada. Anyway, it doesn’t matter because my application is still pending.

MD: What were some of the main difficulties you had to deal with when you were working on the project?

Layan: A large part of the project took place during the height of the COVID-19 pandemic. The occupation power used the pandemic as an excuse to further restrict our movement and our freedom. They also imposed crazy fines. If you just lowered your mask from your nose you had to pay a huge amount. Of course, the pandemic was just an excuse. They are always looking for an excuse to restrict us. So we had to deal with that every time we went to the streets to work on the project.

After talking about the exhibition, I also talked with Amir and Layan about Palestinian activism.

MD: Do you think there is a place for Palestinian activism in the West?

What I hear is that McGill is very implicated. It’s lovely to see that this exhibition correlated with the passing of the SPHR’s resolution.

Layan: This colonial system wants us to believe that Palestinians who are not in Palestine – Palestinians in the diaspora – are not part of the Kadeya and are not part of the Palestinian issue. This is not true at all. It’s just a strategy to further fragment us. The work that is being done here is important. And it’s not just solidarity – I hate the word solidarity. Of course, our daily confrontation with the occupation power back in Palestine is not the same as what the people are doing here, but our social power can be constructed by the union of the many movements happening in the West. This can create a sense of unity with Palestinians across the world.

MD: Sometimes, Palestinian activists in Canada and the West get accused of being antisemitic. What would you say is the difference between anti-Zionism and antisemitism?

Amir: The difference is huge. Zionism, if you understand its history, is intrinsically tied with antisemitism. Herzl himself was antisemitic. You have a lot of evidence for this. And you see how Zionists allied themselves with Nazis in the past. How they used the fact that Jews were hated in order to garner support for their movement. Zionism is part of racism. It’s part of the same racism that created anti-semitism. The problem here is that many people see Jewish rights as Israeli rights. That’s very dangerous.

Layan: Antisemitism became this label that Zionists use to protect themselves.

MD: How can we highlight Palestinian narratives in Canada and the West?

This interview has been edited for brevity and clarity.