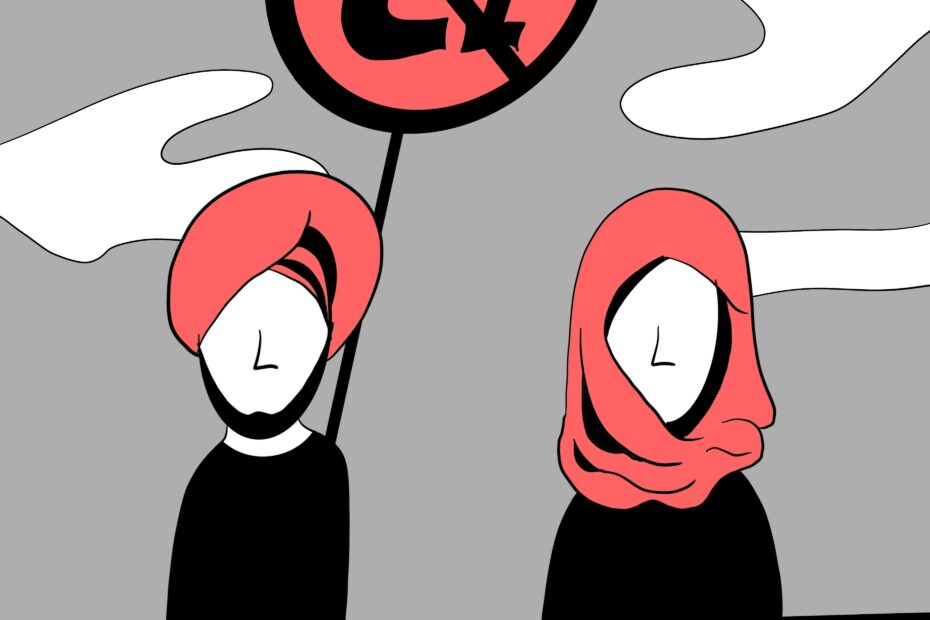 On  Thursday, March 24, the McGill Coalition Against Bill 21 – in collaboration with the McGill Institute of Islamic Studies, SSMU, the Arts Undergraduate Society (AUS), and the Muslim Students Association (MSA) – hosted a panel titled “Living with Law 21: second-class citizenship in Quebec today.” Invited to speak were Fatemeh Anvari, a teacher who was removed from her teaching post because of Bill 21; Rabbi Lisa Grushcow, a senior rabbi who has testified against the bill before Quebec’s National Assembly; Zeinab Diab, a PhD student studying the effects of the bill on religious minorities; and Faiz M. Lalani, a lawyer representing the World Sikh Organization in an appeal against the bill. The three-hour presentation was held in person at the Tuesday Night Café (TNC) Theatre and over Zoom, and it was attended by about 100 people, according to the organizers. The panelists discussed the impacts of Bill 21 on their lives and work, commented on the current state of the fight against Bill 21, and provided suggestions as to how members of the McGill community could aid in this fight.

The first to speak was Fatemeh Anvari. In December 2021, she was fired from a job teaching third grade at Chelsea Elementary School because she wears a hijab. The incident was covered widely by Canadian media, and thousands rushed to defend Anvari against a bill they called “awful” and “discriminatory.” Still, as Anvari explained to the audience at Thursday’s event, she “felt extremely alone.”

Anvari, who now works as a Student Life Animator at Chelsea Elementary School, emphasized the role teachers play in teaching their students to be true to themselves and to stand up for what they believe in. “How can we teach students to be their authentic selves,” she asked, “when their teacher cannot be her authentic self?”

As much as it pained Anvari to say goodbye to her students – one of whom, she recalled, drawing emotional responses from the audience on Zoom, “asked me whether it was my decision not to be their teacher anymore” – she understood that removing her hijab would be a disservice not only to herself but to her students.

“I choose to be as I am and to exist as I do,” she concluded.

The next speaker was Rabbi Lisa Grushcow. She detailed the three reasons why her temple, Temple Emanu-El-Beth Sholom, joined a coalition against Bill 21. Reason one was “it’s about us”: Jewish people, also religious minorities in Quebec, may feel the effects of Bill 21 if they wear a kippah or other article(s) of faith. Reason two was “it’s not about us”: Grushcow acknowledged that Bill 21 disproportionately impacts Muslim women and that those who are not Muslim women should “use [our] privilege to stand up for what’s right.” Reason three, addressing the place of Bill 21 in schools, was that it can be good for children to learn from people wearing religious symbols. These experiences expose children to people different from themselves and perspectives different from their own, and they help to foster inclusion, acceptance, and an appreciation for diversity, Grushcow explained.

Gruschow also reflected on the “terrible irony” of secularism in Quebec. While the separation of church and state should enable people of all faiths and beliefs to live in harmony, creating “a space where we can be together,” Grushcow argued, Bill 21 has forced many people to leave or consider leaving Quebec.

“People don’t feel they can belong here anymore,” she said.

After Zeinab Diab, who spoke in French, presented her findings on Bill 21, Faiz M. Lalani offered a lawyer’s take on Bill 21. He described the bill as containing several “contradictory legal restrictions” and frustratingly ambiguous language – section 6, for instance, bans affected persons from wearing symbols that can be “reasonably considered as referring to a religious affiliation,” but it does not specify what these symbols are. Lalani also stressed that Bill 21 is “fundamentally at odds with Quebec’s history”; Quebec has always been an advocate for religious freedom, he reminded the audience, and it was the first jurisdiction in the British Empire to grant equal rights to Jewish people.

Finally, Lalani outlined some of the arguments he and other lawyers are preparing to make the next time Bill 21 stands trial. These include: that Bill 21 is a criminal law, and provincial governments do not have the authority to enact criminal laws; that the government of François Legault made improper use of the notwithstanding clause, which Lalani said should only be used in “cases of emergency,” in enacting Bill 21; and that Bill 21, in disproportionately impacting Muslim women, violates the section 28 gender equality clause of the Canadian Charter of Rights and Freedoms, to which the notwithstanding clause cannot be applied. When Legault preemptively invoked the notwithstanding clause in 2019, it will be recalled, he shielded Bill 21 from potential court challenges that it violates certain Charter rights.

Responding to a question posed by an audience member, all of the panelists offered advice as to how ordinary people could take action against Bill 21. They recommended donating money, signing petitions, writing to politicians, and, per Anvari, finding ways “to speak peacefully with people who do not think the same way we do.” Only this, Grushcow added, will help to bridge the “us and them” divide that hangs over Quebec.