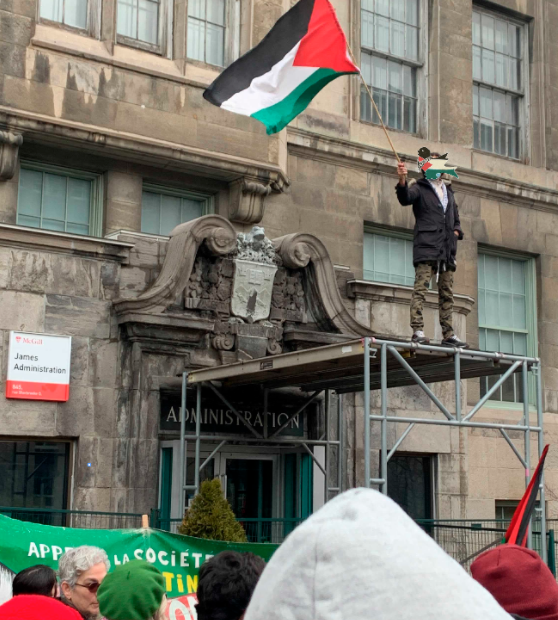 On March 25, students gathered in front of the James Administration Building in response to a Media Relations Office (MRO) email sent by Deputy Provost Fabrice Labeau on March 24 titled “SSMU referendum outcome.” In the announcement, Labeau expressed disappointment in the adoption of the Palestine Solidarity Policy and threatened to dissolve the university’s Memorandum of Agreement (MoA) with the Students’ Society of McGill University (SSMU). In a written press release, rally organizers expressed that “we cannot stay silent while the McGill administration attempts to blackmail our student union, and crush the democratic will of our student body!”

At the rally, calls for “Free, free, Palestine!,” “No peace on stolen land,” and “the students, united, will never be divided” bounced off the exterior walls of the James Administration Building, echoing through campus. Attendees waved Palestinian flags, while one individual mounted the scaffolding in front of the building’s entrance to lead the crowd in chants. Multiple speakers delivered speeches to the crowd, celebrating the passing of the Palestine Solidarity Policy, shaming the university, and encouraging SSMU to stand its ground.

The Palestine Solidarity Policy was passed in the most recent SSMU referendum, announced March 21. The policy mandates that SSMU boycott corporations complicit in settler-colonial apartheid against Palestinians and advocate for the university to do the same, that SSMU campaign for the university to publicly condemn Canary Mission and other surveillance or smear campaigns against Palestinian and pro-Palestinian students, and that SSMU form a Palestine Solidarity Comittee, among other points. The referendum received a 71.4 per cent “yes” vote, meaning it was passed with a supermajority.

“It’s the first initiative to actually represent and make Palestinian activists and their allies feel seen and supported on campus,” commented Erin*, an SPHR member, on the policy. They continued to tell the Daily that it’s the bare minimum that Palestinian activists are emboldened to “advocate without fear of repurcussions, fear of falling to a smear campaign, or just being blatantly doxxed.”

In the MRO announcement, Labeau claimed that the policy echoes the Boycott, Divestment, and Sanctions movement. He continued to characterize it “as an initiative that can only bring more division to our community,” arguing that the policy will “create excessive polarization in our community, encourage a culture of ostracization and disrespect due to students’ identity,” and is “in contradiction with the university’s values of inclusion, diversity, and respect.”

“I’d like to draw attention back to our policy and ask where exactly in that policy do we threaten Jewish identity,” Erin commented, “where we promote discrimination, and how sanctioning [and] divesting from companies complicit in settler colonialism is going to affect students on campus.”

Furthermore, Labeau claimed that the initiatives described in the policy are “in contradiction with the principles expressed by SSMU in its own constitution.” He explained that he had communicated this to SSMU leadership and “advised them to take prompt and appropriate remedial action.” At the March 24 Legislative Council meeting, SSMU President Darshan Daryanani, who was unable to attend live, shared a message with the council explaining that Labeau had sent him a Notice of Default on March 22 in regard to the MoA. According to article 12.2 of the MoA, in the event of such a default, the defaulting party has 30 working days to “remedy such default.”

In his notice, Labeau allegedly claimed that “in no way can such a policy be considered to ‘facilitate communication and interaction between all students from all McGill communities’ or to ‘act in the best interests of [SSMU’s] Members as a whole.’ It will also clearly lead to discrimination based on characteristics such as race, national or ethnic origin, and religion.” Daryanani commented that “[SSMU] requires a certain degree of autonomy to effectively carry out our roles, and we fear that the statement made by McGill University severely encroaches on this ability.”

“Democracy that McGill has championed so much ends where discourse that challenges the administration begins,” said Erin. “That’s such a fucked up, fragile demonstration of democracy […] it reveals that McGill does not actually champion democracy, but only extends it to narratives that don’t threaten its position,” they continued.

In the MRO, Labeau further communicated that if SSMU leadership fails to “take prompt and appropriate remedial action […] the University will terminate this Memorandum of Agreement.” Daryanani comments that the threat to terminate the MoA is of “particular concern.” The MoA allows SSMU to work alongside the university on many matters, namely the assessment and collection of fees from students and the operation of university accounts for such fees. Essentially, the termination of the MoA would prevent SSMU from receiving the fees that it currently solicits.

“Anything that can actually bring some form of representation to Palestinians is deemed as controversial […] it’s ridiculous,” says Erin. According to them, the terms outlined in the policy are necessary, “and for McGill to condemn that […] and for that to be conflated with antisemitism, [it is] very clear on McGill’s part that it’s willing to do absolutely nothing for Palestinian students on campus.”