FKA twigs’ new record is as relatable as it is experimental 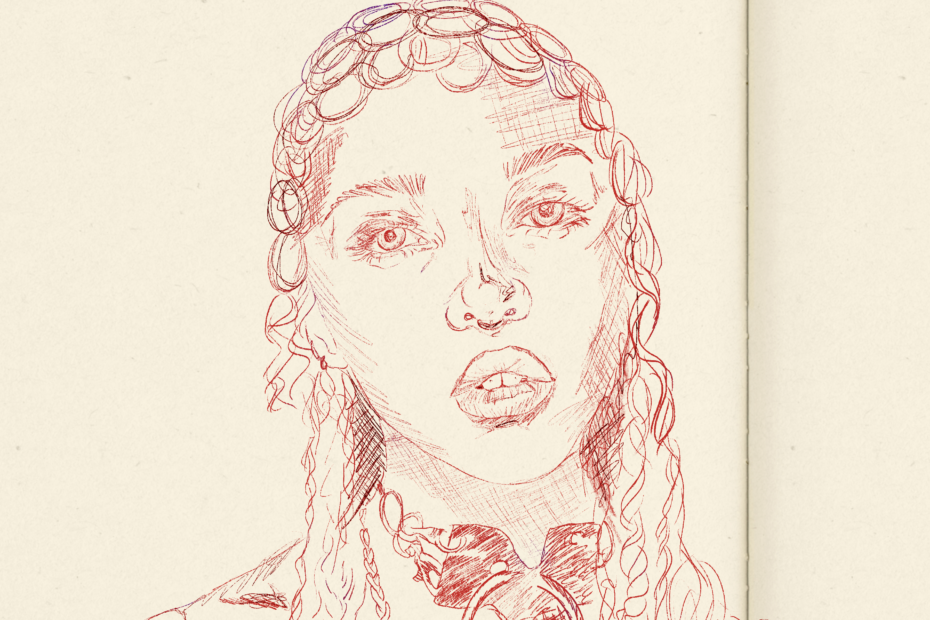 “Hey, I made you a mixtape,” declares FKA twigs on the first verse of her latest album release, CAPRISONGS (2022). The English singer-songwriter addresses the listener in a personable opening line – it seems unlike the otherworldly music she released in the early 2010s. I first listened to FKA twigs back in 2014. Her debut album, LP1 (2014), got me through a lot when I was a teenager. Listening to “Video Girl” was a strange experience – but one that twigs’ fans knew was radical. Her ethereal vocals and lyrics were different from anything in pop at the time. I have a vivid memory of watching her dance in the music video for “Glass & Patron”; I was entranced by her movements, fluid and soft but also precise and cutthroat. When watching a new clip for “jealousy,” in which she dances with friends and sings about “taking it easy,” it seems that twigs is letting go of the pressures inherent to making avant-garde music. CAPRISONGS aims not only to showcase but also to dissect the confidence twigs has while making experimental music – this quality, I believe, makes it her most successful album yet.

The track “ride the dragon” introduces us to CAPRISONGS’ experimental sonic landscape: somewhere between familiar club hits and art-pop. Somehow, it manages to combine hip-hop, R&B, and choral music seamlessly while still sounding laid-back. With ease and elegance, the album begins confidently: “You wanna get a bit of my mystique?” Her voice is as rhythmic as the beat as she raps alongside vocals that seem to be plucked from a church choir: “I’ve been waiting for so long…” It is this casual flow from hip-hop to classical vocals that make the record feel like a dance full of motion.

Twigs’ confidence in CAPRISONGS does not alienate the listener. Instead, the record cleverly manages to highlight both the positive and the negative aspects of the notion of “loving yourself” – a phrase endemic in social media and advertising. The inclusion of voice memos across the album is relatable and intimate, like listening to your best friend. On “meta angel,” she inserts a conversation between her and some friends: “Each year, I’m still like, so shy and so quiet! […] I want to be more confident, I really do!” In the music video for the song, she shoots an insecure alter ego with an arrow, trying to move beyond her doubts and hesitations. This display of vulnerability allows twigs’ listeners to explore their own lives and experiences with self-doubt. Although fans might have an idealized vision of her, she shows that she is not so different from them after all.

Twigs also comments on confidence by exploring the female gaze. Historically, the music industry has been male-dominated, with men having near-complete creative control over perceptions and narratives of women in music. Even songs about empowering women are often written by men. In 2018, hundreds of women mobilized at the Grammys by wearing white roses, calling for the end of sexual harassment in the industry: “Time’s Up.” Twigs reflects this cultural moment by openly singing about what it is to be a woman who makes music in the 21st century. The song “minds of men” confidently calls for a “woman’s world.” In the song, twigs encourages her lover to explore his softer side and abandon the pressures of toxic masculinity: “Let me take your hand, just lay your worries down.” By helping her lover become more emotionally responsive, twigs takes an active role in the relationship and makes amends with the minds of men. In doing so, she acknowledges the effects of patriarchy and how gender norms affect both men and women. Twigs includes this feminist message alongside allusions to the sacredness of her body. The track is also about sexual liberation and freedom, themes that are extremely important in hip-hop. In “oh my love,” twigs openly talks about toxic relationships that are hard to quit. She is proudly emotional, something that often leads women to be labelled as irrational and hysterical, especially in the media. A voice recording recounts the details of a troubling relationship in which twigs was involved, making the listener feel close to her. It’s a compassionate offering of love and a useful piece of advice for her fans.

Twigs’ record is made for this generation not only because it encourages social change but also because it signals a shift in the broader history of the mixtape. Throughout the years, this medium has constantly evolved. Today, the aesthetic difference between the rap mixtape and the rap album is not noticeable. Even when CAPRISONGS producer Arca, who is known for experimental music, joins in on the productions of “tears in the club” and “thank you song,” the consistent hip-hop influences, interludes, and the inclusion of voice recordings make the album work as a whole. Mixtapes are no longer rough around the edges. On the contrary, the modern mixtape attracts a flexible audience, typically consisting of fans rather than the industry as a whole. By showing that this audience is not only her fans but the “old twigs,” someone who was much less confident than the “new twigs,” twigs presents CAPRISONGS as a memoir. She posits that the mixtape is a medium that can be used to recount her life to herself – a brave move of experimentation and self-confidence.

After 16 unique tracks that merge perfectly with one another, the listener is greeted with the soft piano chords of “thank you song.” The glitchy progression of the song recalls Arca’s 2021 song “Joya,” in which she repeats that her lover is a “jewel amongst men.” Similarly, on this closing track, FKA twigs repetitively thanks someone. Since the record feels like a diary of twigs’ journey to self-acceptance, the passionate uttering of the words “thank you” feels like she has reached an epiphany. Indeed, it is emotional metamorphosis, where she declares her openness to love – and to loving herself. Like her previous records LP1 and Magdalene, it transcends classification. “Thank you song” is too hopeful to fit the traditional woeful ballad – but too reflective to recall most commercial hits that play on the radio. CAPRISONGS avoids complex symbolism in favour of relatable directness: “No longer afraid to say it out loud.” It’s FKA twigs at her best.